Mrs Bowyer asked us to produce some work to go on display in L1.  As we have been learning about working within childcare settings, we decided to focus on things that you need to...

On Enrichment Day, we learnt about assisted suicide, otherwise known as euthanasia. In the first two periods of the day, we did an array of tasks which informed us about what...

On Friday 24 January five BMS Student Language Leaders went to Hartsbourne School to help the year 4s get creative in their French lesson. The class was learning the classic story...

Last Friday, 20 year 11s got the exciting opportunity to visit Oxford University. Upon arrival, we were greeted at the Balliol campus by a third-year student called Frank. He gave...

It was a privilege to welcome the Acting Deputy Headteacher of Falconers School to Bushey Meads last week and be able to show him around our learning community and introduce him...

With World Book Day just around the corner we are excited to launch our book themed bake off competition! Students (and staff) are being invited to get creative with their bakes...

Another amazing week of sport for Bushey Meads students with fixtures in football, netball, basketball and indoor athletics. Special mention must go to the Year 8 Boys football team who were successful in the District League Division 1 Cup Final beating Parmiters 5-2 and also winning their County Plate Quarter-Final match v Monks Walk. It was also great to see so many year 7 and 8 students involved in the Hertsmere Indoor Athletics Festival at Queens School earlier this week as well. It has been another very busy half term with the whole school Health Week just around the corner in March. Well done to all students who have attended sports clubs or represented school teams over the last 6 weeks.

As we come to the end of another busy half term a polite reminder that only Bushey Meads School Leggings should be worn by girls in both PE and dance lessons and when representing the school.  Alternatively girls can wear plain black shorts or tracksuit bottoms.  Please can parents ensure that all students have the correct PE kit for after the break.

Comment : On friday afternoon we travelled over to Monks Walk school to play this quarter final game on a large 3G pitch. Prior to the game the boys identified that if we got the ball into wide areas we could utilise the space through our two pacey wingers- D.Barbakadze and N.Bryan. This was the game plan from the outset which resulted in many chances being created but no goals being scored in the first 20 minutes. We scored our first goal through a smart piece of play in the middle of the park which ended in J.Wheeler finishing into the bottom left corner to give us a 1-0 lead. This was a lead we then built on and eventually netted 6 against a strong Monks Walk side who showed great persistence to score 3 themselves. We had a few injury problems in the latter stages of the game which resulted in a change of shape and personnel, which the boys dealt with confidently and maturely. 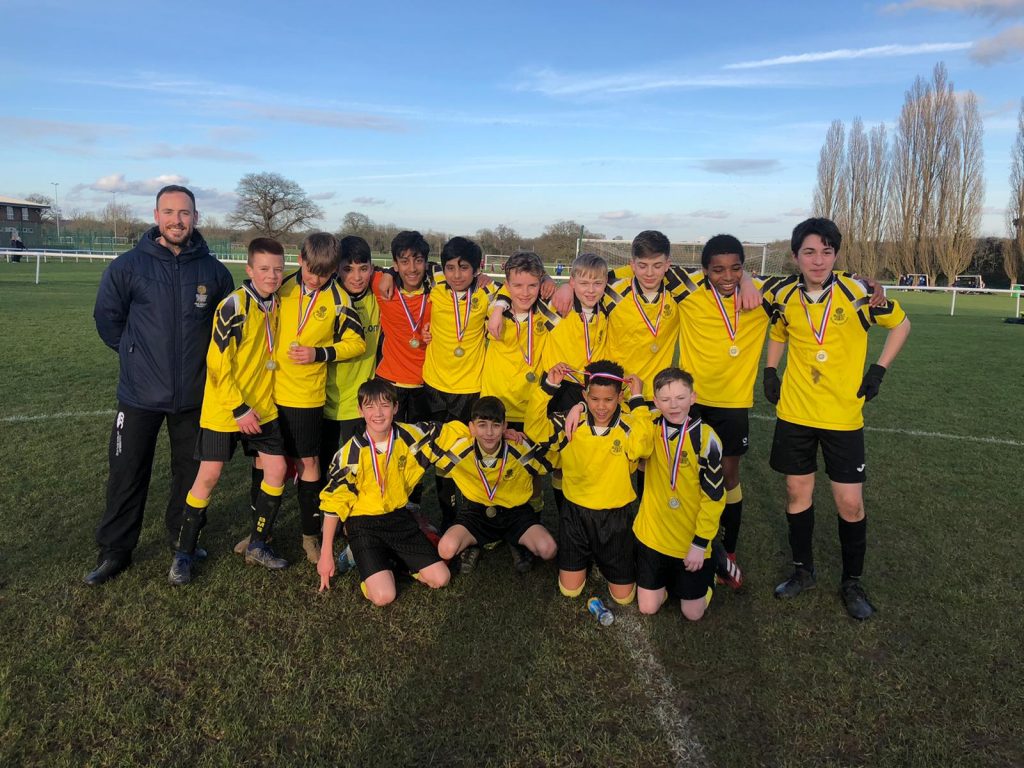 Comment : A fantastic afternoon of football over at Parmiters school where the sun was shining on a league final win for Bushey Meads! We played a physical Parmiters team who battled well throughout the game and really put the pressure on in the first half, when they equalised straight after our opener. We battled well through the half-time where the scores were level. Going out for the second half the boys recognised that they each needed to give that little bit more, and that’s exactly what they did. Individual battles across the pitch were won, which was led by J.Sims who had a solid game at right back and then in the centre of a midfield three. This high work-rate was topped off by 3 goals in the second half which saw us win convincingly in the end. Well done to all players for a brilliant season in Division one, lets see what challenges the Premier Division bring next year! 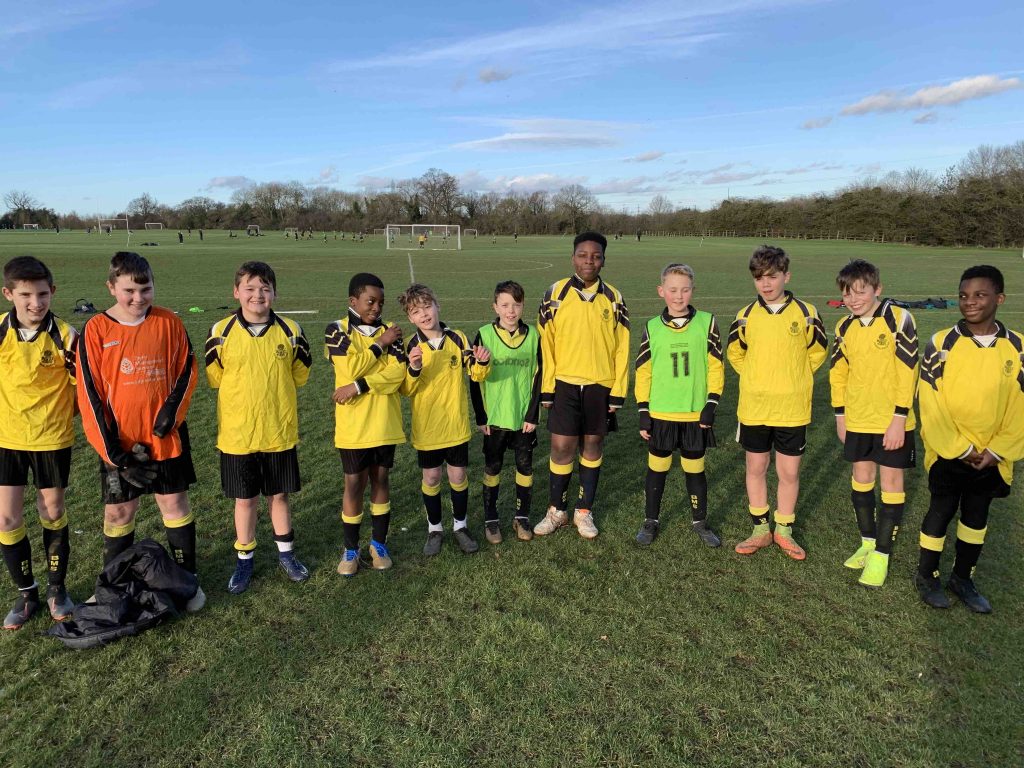 Comment : Wednesday saw the year 7A team play their final football match of the season against a strong Reach Free team. At the start of the game both teams were creating some good chances to score however both defences stood resolute. However midway through the half the deadlock was broken by some excellent play from Reach Free. Unfortunately the second half saw our opposition extend their lead again through some more excellent football. Credit to the team they never gave up and there are definitely positives to take from what has been a very good first season in school football.

Comment: We travelled over town to Watford Boys on thursday evening to play a talented team who were physically strong. In the early stages of the game we went behind by two baskets, due to a lack of defensive awareness around the key. However, this was swiftly rectified by the boys who began to identify their defensive responsibilities and counter attacked quickly. This fast paced counter attack was often finished off by composure around the basket which saw us net 11 times in total, most of which were tidy lay-ups. The closing moments of the final quarter were tense as Watford Boys had free-throws to potentially level the tie in the last seconds. Fortunately for us, they were unsuccessful and the baskets we’d made in those latter stages was enough to see the game out. Well done to both teams for an exciting encounter.

Comment: Another fantastic win for the senior boys in the Hertfordshire County Basketball League. Against a very physical opponent the superior fitness and running from the Bushey Meads players continually broke quickly and decisively to lead from the first points scored in the game until the final whistle. Now on to two final games after half term, with the squad in with a great chance of making the county final in their first year in the competition it is certainly a very exciting time for senior basketball at BMS.

Commended performances : K. Law (nominated as player of the match by the opposition and C. Pullen for having a terrific game!

Comment:  A tremendous performance by our year 7 team, who are improving every week.  In the first 2 quarters we were leagues ahead with our shooters putting on a fine performance.  We had a slight dip in the third quarter which allowed Immanuel to pull back the scoreline.  After a fab team chat we all went out for the final quarter and held on to a great 10-7 win.  A wonderful performance by all of the players.  Well done! 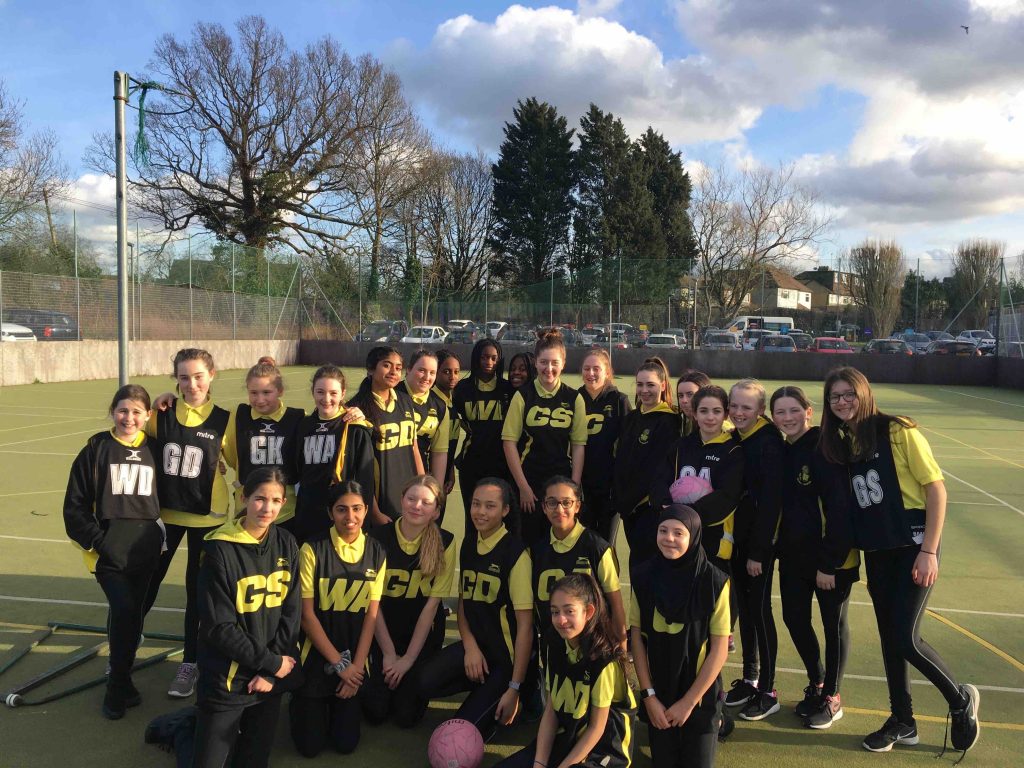 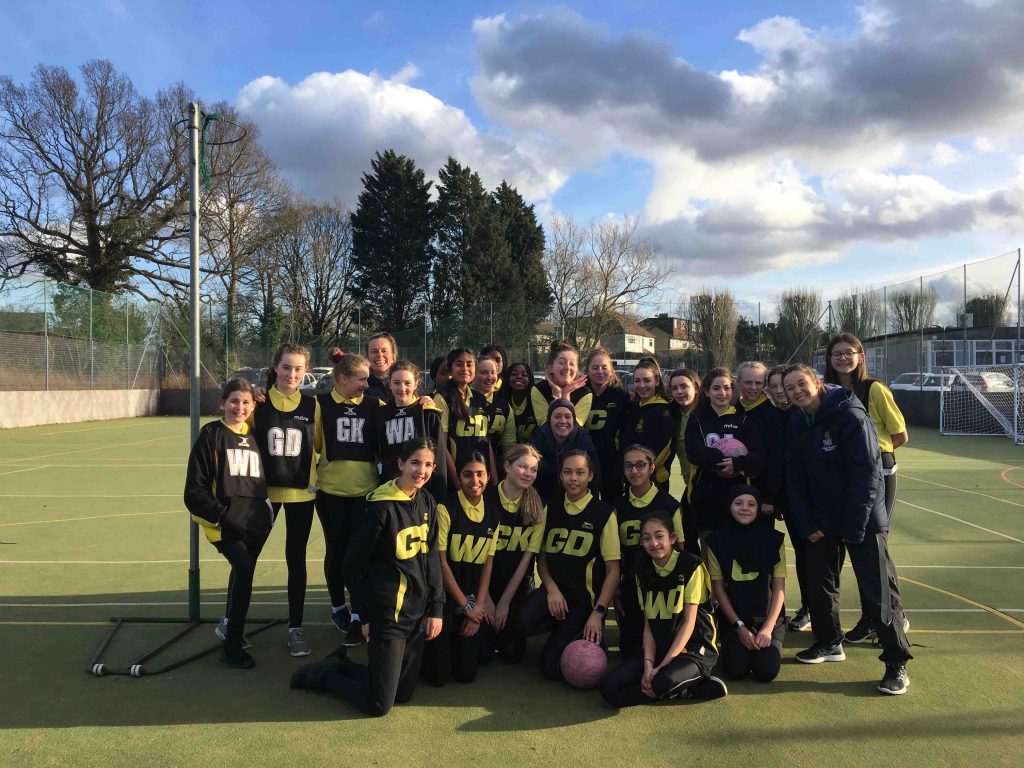 Commended performances :  R.Richards voted by the opposition, H.Imansoura for her tireless play through the court.

Comment: What an exciting game! This was a game that saw Immanuel take a 4 goal advantage into the half-time break before BMS turned it around to take the lead by 1 after the third quarter, having scored 6 unanswered goals, Immanuel then pulling away again in the final quarter to secure a 1 goal victory.  The BMS team worked tirelessly throughout and with a bit more shooting success the victory would have been ours.  The girls have worked really hard all season and it’s been great to see the improvements in their play.  Well done ladies.

Comment: For the first half the score was fairly even with Immanuel only gaining a 2 goal lead. The girls passed well down court but unfortunately found it hard to get the ball into the shooting circle. Once in the circle the shooting was successful. The girls worked hard throughout the game and did not give up. It has been a tough season but the girls have always been reliable, hardworking and played with great sportsmanship. Well done and thanks girls for your commitment to the netball team.

Comment:  After the successes of last month’s badminton festivals with St.Margrets and Bushey Academy the BMS students were keen for more competition.  With some new faces in this week’s team it was good to see all the girls enjoying their matches against SMB.  With progress being made on every court the performance levels have clearly stepped up and the matches showing more quality and longer points.  Greater tactical awareness was also evident with the girls showing a greater range of shots in order to try and with the point.

This was another really positive evening of sport for students in Yr 9/10 who were true ambassadors for the school.  Well played girls.

Each year we take a group of year 7 and 8 boys and girls to compete in a sports hall athletics tournament against other local schools. All students compete in a variety of different activities that they would have never experienced before, such as the standing long jump and 8 lap paarlauf. This gives them a fantastic opportunity to represent the school in a competitive setting. All students gave their all in each event and were a credit to themselves as well as the school. They will all now be looking forward to the summer term where they will be able to transfer these skills into their lessons and outdoor competitions. Well done to all involved. 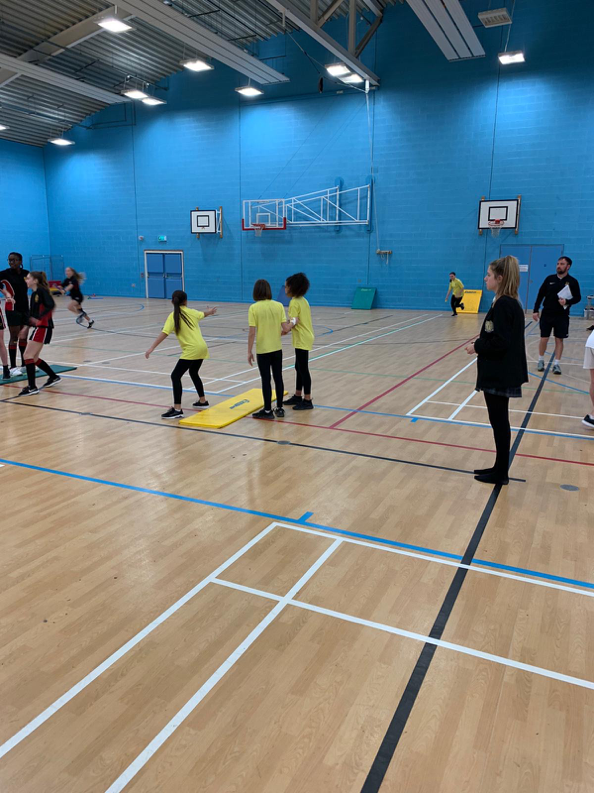 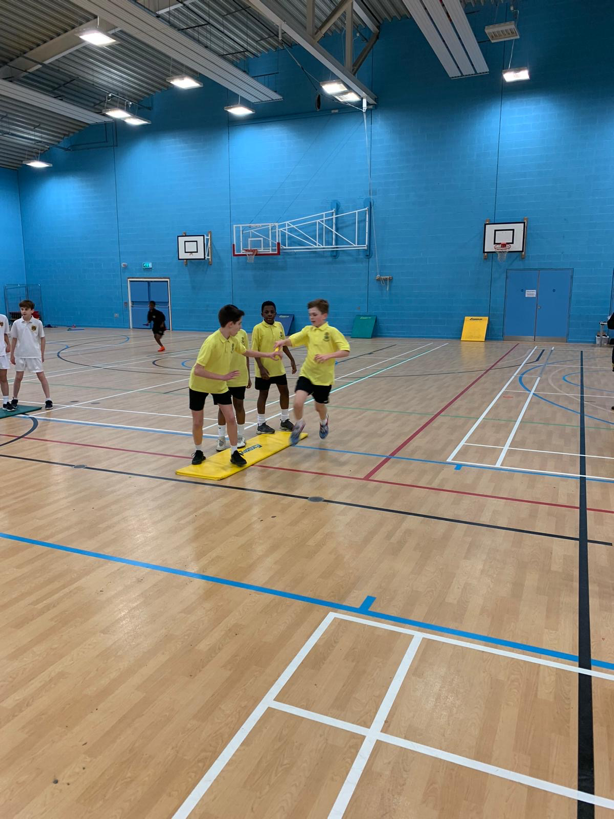 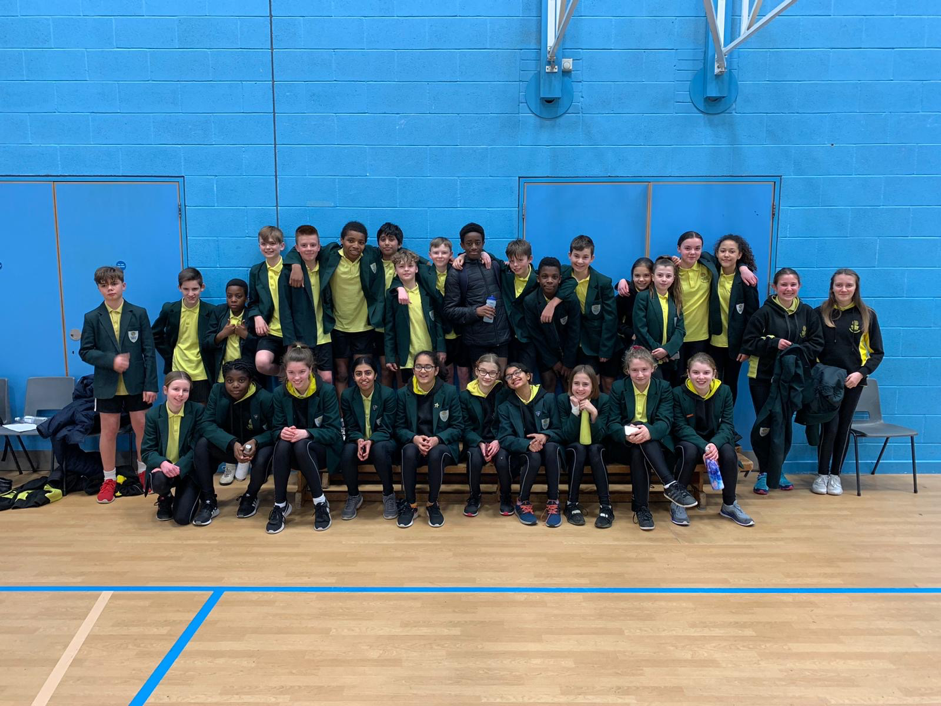 The third of five whole school enrichment days took place on Thursday 6th February. The days are designed to enrich the curriculum for students with more in depth looks at subject...