Posted 6 days ago by Miss Al-Rubai

Posted 7 days ago by Jeremy Turner

This is a project that will be run by John Scott, who has been mentoring a few of our students from YCH.

Posted 7 days ago by Chantal Smith

It has been extremely challenging organising a dance trip recently due to closures and show cancellations as a result of COVID, but finally on December 15th 2021 a group of over...

Posted 7 days ago by Eliz Noyan

Word of the week: Coax

Posted 7 days ago by Danielle Bowe

Last Friday morning History Teacher Mr Dowty shared his top tips for how to engage students in that ongoing powerful dialogue of marking and feedback. Using the various coloured...

Posted 7 days ago by Jeremy Turner

Job Vacancies Within Our Trust

We have two exciting job opportunities for suitably experienced individuals at our great school. If you would like to find out more please click on the links below. HR Manager for...

Posted 7 days ago by HR

Posted 7 days ago by Helen Blowers

Deepa Patel 13W 11/01/22 An outstanding student, Deepa always shows great maturity and focus on her learning. She uses her study periods with efficiency and shows her commitment...

Posted 7 days ago by Giles Monks

Bullying in Schools Reduced During Covid

Early indications are that bullying has dropped during Covid. Surprising findings have shown that both bullying and cyberbullying dropped dramatically by 30 to 40% during lockdown...

Posted 7 days ago by Helen Mateides

This week at Bushey Meads school the Sociology and Law teams invited ‘True Life Conferences’ to run their “Life Behind Bars” Conference.

The conference addresses course content for both Sociology and Law and it focussed on, “Does prison work and what happens when prisoners are released back into society?”. Students were given the chance to ask questions, discuss ideas and develop opinions about the effectiveness of the penal system. Students explored the history of the ex-convicts: what crimes they had committed and how long they spent in prison, what prison life was like and whether they were rehabilitated.

This article has been written by Sophie Edwards and Kimberley Ngugi (Year 12) sharing their experience of the day.

Today, A level and GCSE Law and Sociology students had the amazing opportunity to take part in a ‘life behind bars’ conference. Over the course of the day, we were lucky enough for hear from four different types of convicted criminals as they each told us the story of their life, their crime, their experiences of the criminal justice system and prison, and finally the long-term effects it all had on their lives.

We first heard from a man named Brian who explained to us that he had had a pretty normal life, going from business to business until he was arrested, seemingly out of nowhere, for fraud. He told us that although he was innocent, he was persuaded to take a plea deal to plead guilty to ensure a lesser sentence. He took it. This highlighted to us one of the first flaws in the criminal justice system.

Our next speaker was a young man named Jake. He told us his story, from being kicked out of school at 16, having to live in a homeless shelter shortly after due to a rocky relationship with his parents and also being diagnosed with Aspergers. Despite this he continued to work hard and eventually got into university. He explained that after an increasing battle with his mental health he moved back in with his parents and soon after a few incidents that took place he was arrested and ordered to stay away from his parents. Shortly after his release, he tracked down his dad with the intention to just take money from him, however, the interaction ended in him assaulting his father and stealing his watch. When later asked, he informed us that if he hadn’t been struggling with his mental health, and if it was at any other time in his life, he would never have done what he did.

The next criminal we were introduced to was one of the most interesting. Jim told us that his criminal activities started at age 12 and he then spent the rest of his life in and out of the system, consistently reoffending. When asked why he continued to do so, despite knowing the consequences of his actions, which mainly consisted of theft and burglary, he told us that he simply ‘did not care’. He had no remorse for his actions and did not regret the time he spent in prison. When asked later, he told us that he was a middle child in a family of 9, and he possibly used crime as a way to gain attention or as a coping mechanism.

We each discussed amongst ourselves, using our sociological knowledge, our opinions on what caused these people to commit the crimes they did. We discussed things such as impacts of your family life and childhood, as seen with both Jim and Jake, and also the impact of the system itself on young offenders and how the label it gives someone, ‘a criminal’ can influence someone’s behaviour, also seen with Jim.

The Law students also had the opportunity to apply their skills from lesson into a practical setting, by taking place in a mock trial about a murder that in a shocking turn of events turned out to be the real court case about one of the speakers. The original arrest was on GBH after an interaction with a man under the influence who committed indecent assault but later died in hospital a while after the accident and Mr. Lewis was charged with murder which he pleaded guilty to and was given a life sentence with a 12-year tariff. There was a clear divide in opinion of guilty and not guilty between the two groups of students but it appears that Ms Knowles’ class have been very successful in their lessons as it turned out they were mirroring the real jury of the case by deciding Mr. Lewis is guilty of his crime. He then went on to describe his life over the next few years in different prisons and learning his way around the system and what the social life in that environment was like and how isolating it was from the outside world. After he left prison around 20 years later he was unable to get a job anywhere due to his record and how society views murderers despite 90% of them never committing a crime again and it is usually a onetime offence. The only man who employed him was one of his fellow inmates, Brian who shared a cell with him and did not care about his crime.

In our final hour with the visitors, we had the chance to ask them any questions ranging from their early life to their experiences in prison to how it all affects their life now. After a discussion with Brian, we learnt that he believes that the criminal justice system overall is not corrupt, but corruptible due to the people able to manipulate it. However, he does think the UK has one of the best justice systems in the world. Mr Lewis shared his experiences with rehabilitation courses and he does not believe that they work and it only teaches criminals to say what they need to for freedom , he also additionally stated that he failed his anger management course for pointing out how ineffective it would be in a real life scenario suggesting that there may need to be a re-evaluation on how we rehabilitate criminals before freeing them and whether they really learn how to change their ways. This was backed up by Jim/Brian who said he just learnt what he needed to say to pass. So, it really does call into question the effectiveness of prison rehabilitation and if there needs to be a change…

Overall, this event was an enriching experience and we are all incredibly grateful for Miss Alrubai and Mrs Knowles for organising this once in a lifetime event for us. 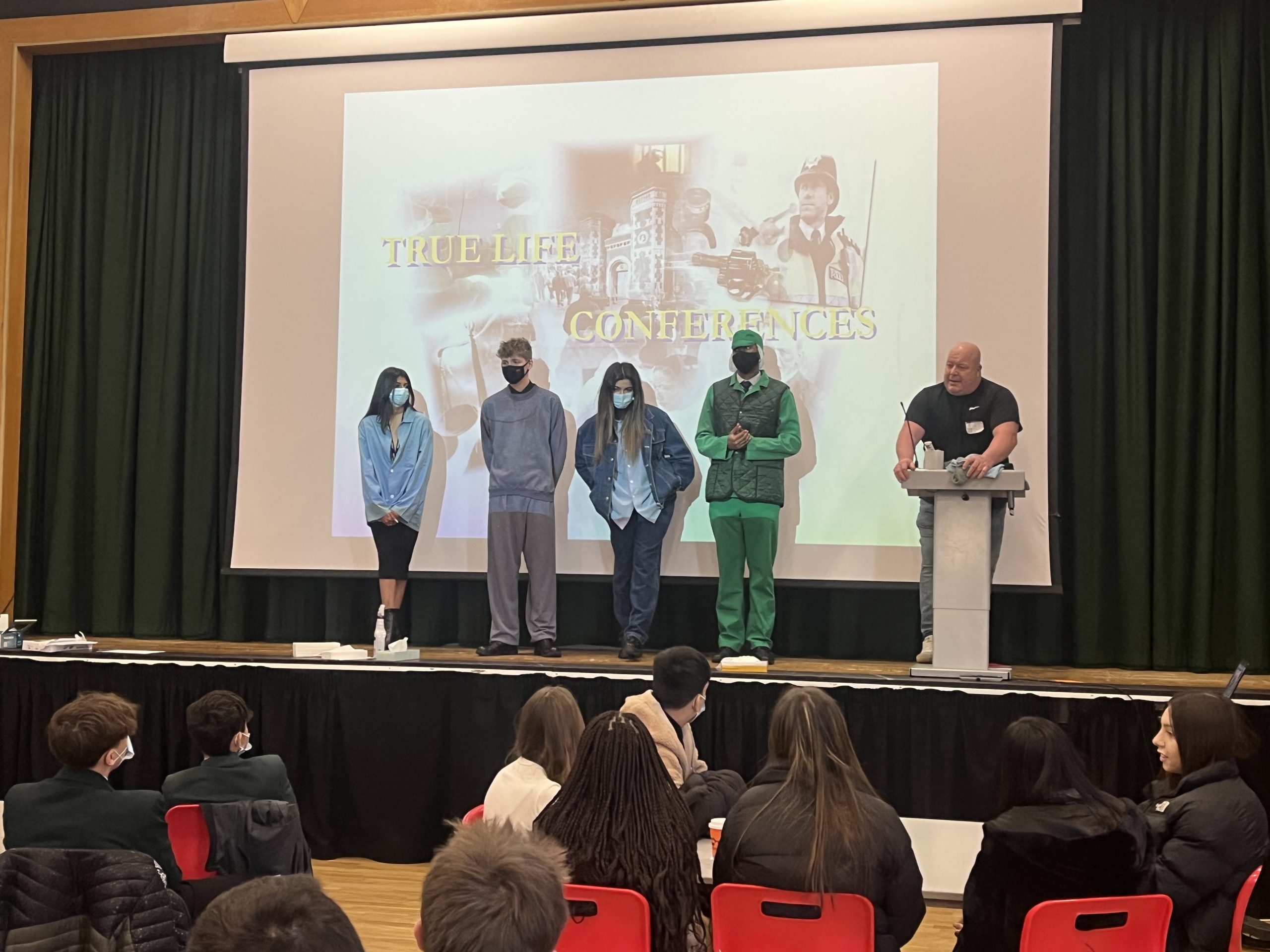 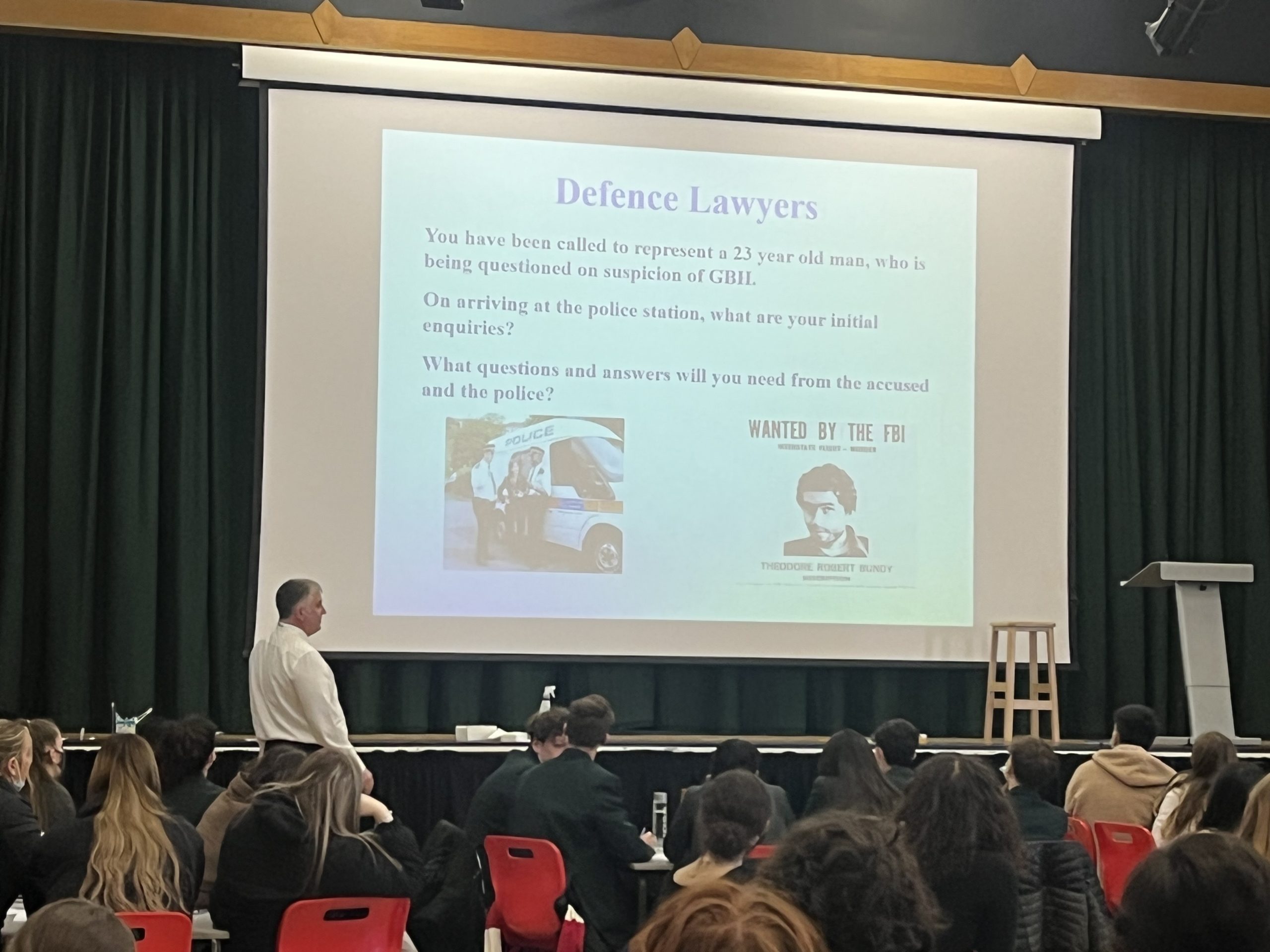 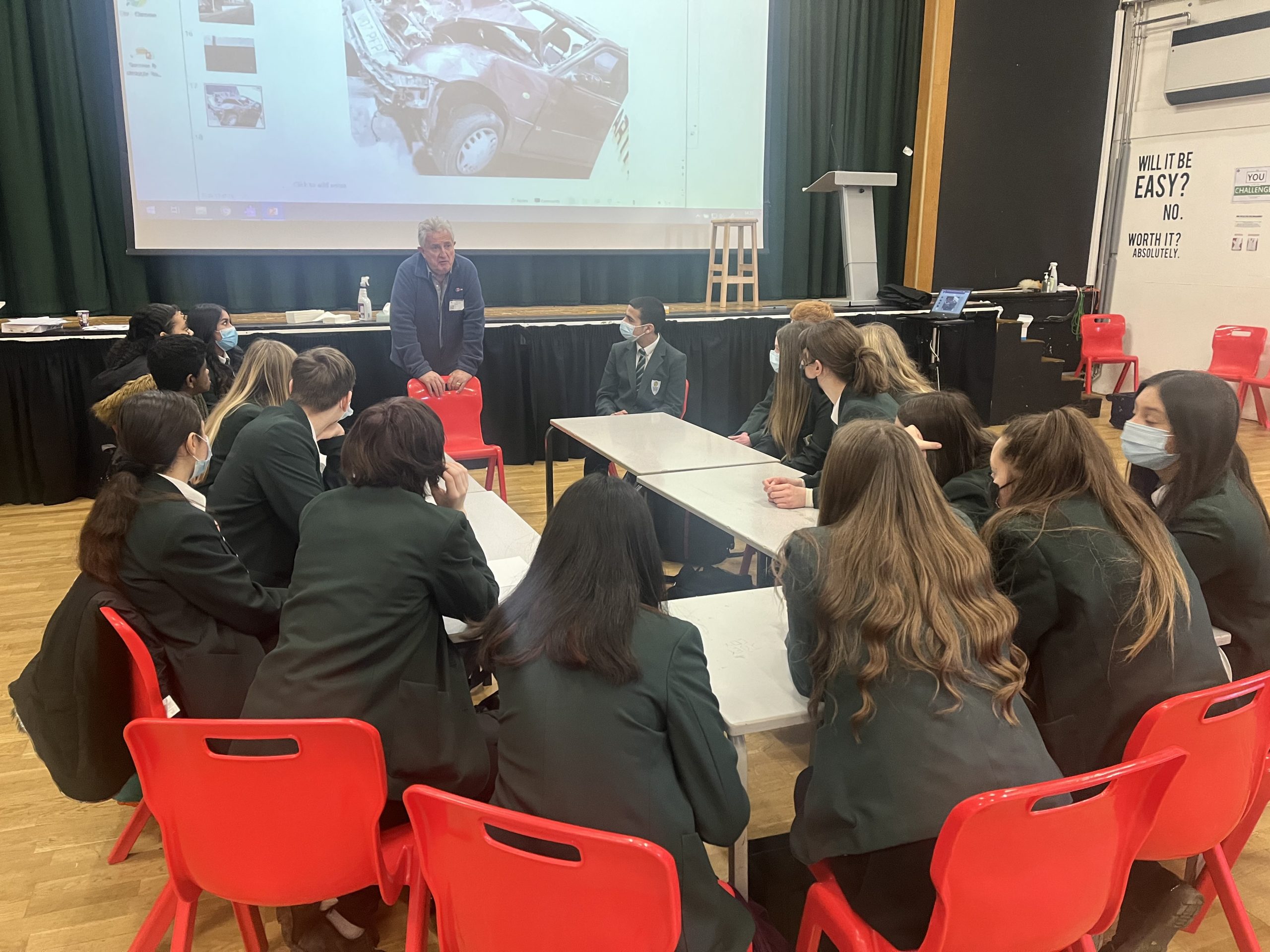 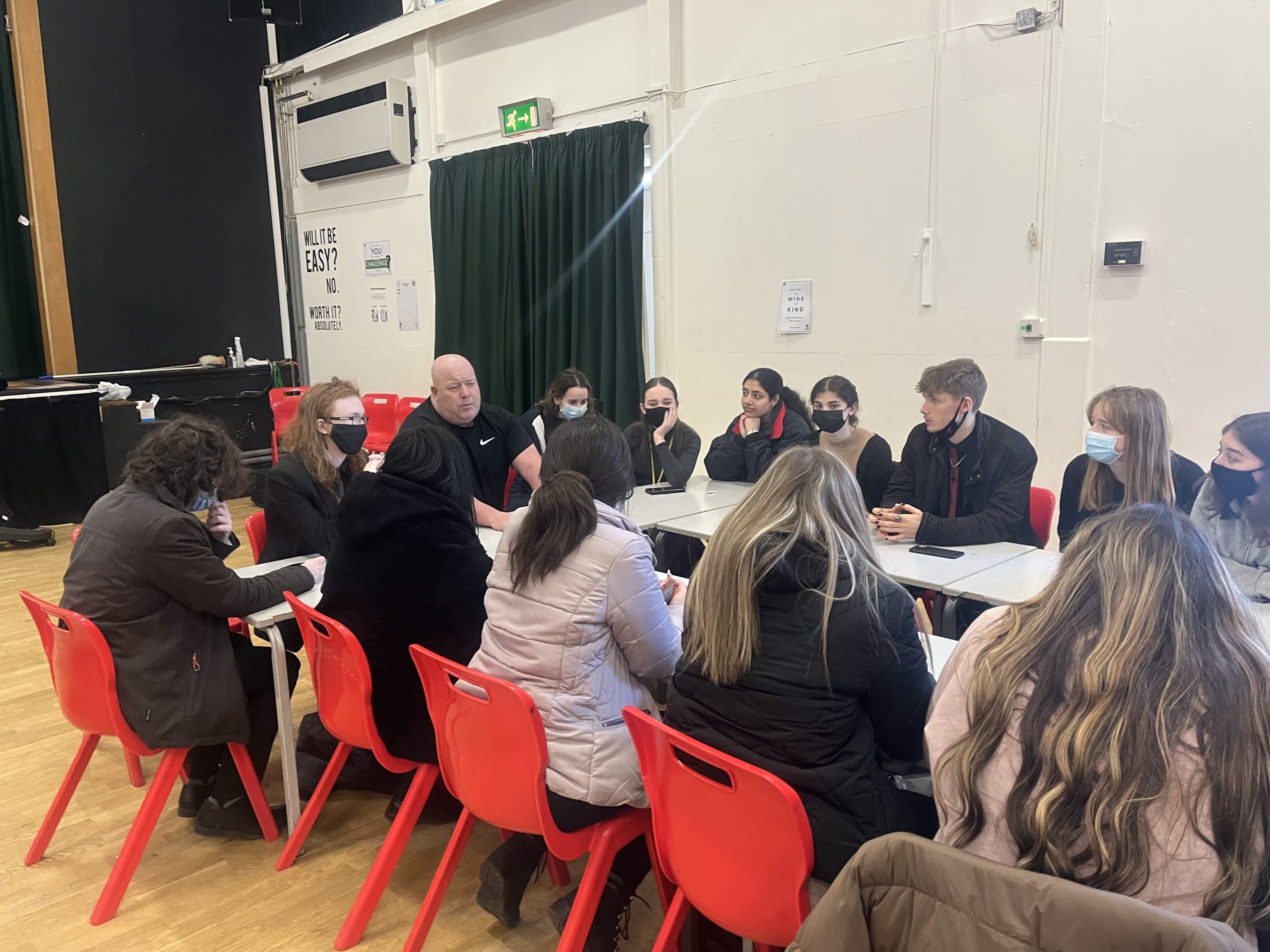 Update from the History Department

So far in the Year 10 we have started to learn about the topics we need to know about for our GCSEs, we have learnt about Kaiser Wilhelm II; the Weimar Republic as well as the...

Spring Term in the Humanities Faculty

The Spring term is coming to an end, a term where Humanities, and other departments have had to experiment and explore lots of different ways of learning. Throughout these few...