The GCSE Art curriculum places a heavy emphasis on drawing from observation, as opposed to drawing from pictures. I decided in July to run a trip in September and apparently this...

Attention all parents, staff and friends of BMS! After the Christmas holidays we will be hosting an exhibition at The Gallery @ Bushey Meads of your work. Start getting your...

The Gallery @ Bushey Meads now has an Instagram account thegallery_busheymeads Please follow us to see all the amazing work taking place in our fabulous Art department.

The GCSE Art curriculum places a heavy emphasis on drawing from observation, as opposed to drawing from pictures. I decided in July to run a trip in September and apparently this is the fastest turnaround of a trip in BMS history. So on a particularly wet Tuesday in September twenty-seven students met myself and Mr Knowles at Watford Junction Station and set off for the wilds of Scotland. We made a very wet walk from Euston to Kings Cross and left puddles on the floor. Apart from a problem with the first train meaning we had to change at Newcastle, and one student leaving her coat on the first train, we arrived in Edinburgh only 5 minutes later than our original plan.

After a quick journey on the tram to the hotel, to check in and drop off our stuff, we headed back to Calton Hill to take in the city skyline and start doing some drawing work. Our local guide for the week Mrs Armit, met us with a coat for the poor cold student who had lost hers and led us up the hill giving us some interesting bits of history as we went. As we had travelled the wet weather had followed us and by the time we got to the top of the hill the clouds had closed in and there was nothing to see.

After a good night’s sleep we got in a coach and headed to Falkirk to see the statues of ‘The Kelpies’. The tallest stands 30 meters high and they are a dominating sight on the Scottish landscape. Created by Scottish artist Andy Scott they are the largest sculptures of Horses in the world, and the largest sculptures in Britain. The students seemed impressed and after a tour of the sculptures and a chance to look inside, they were set more drawing tasks as the sun came out.

We then jumped back in the coach and went to see the Falkirk Wheel which connects the Union canal to the Forth & Clyde canal, creating a central waterway that stretches across Scotland. It is the world’s first and only rotating boat lift, it rotates 180 degrees in under five minutes using the same amount of power as eight kettles. We had our packed lunches and drew the fascinating engineering.

Then our very patient coach driver took us into Edinburgh and we explored some interesting contrasts in architecture, including the inspiration for Diagon Alley from Harry Potter. The students did some excellent work and were highly motivated to do well. 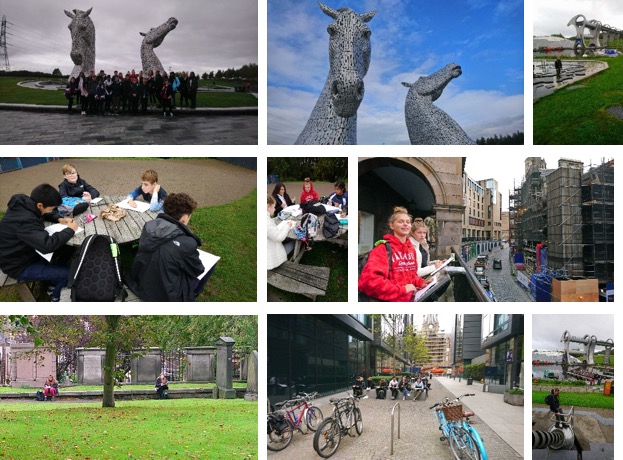 On Thursday we had a lovely morning at Edinburgh Zoo which is on a hill that looks over the city. Students were encouraged to draw the different styles of enclosures and buildings, and take pictures of the cityscape from the top. After lunch we headed into town and back up Calton Hill to get the views we sought on the first day. This time we were much more successful.

We then rushed back to the hotel for an early dinner and despite two boys leaving their bags on the tram and having to go rescue them, we were back into town for 9pm ready for our Ghost tour from the lovely Mrs Armit. It was detailed, creepy and all true stories of murder and death. I highly recommend her story telling skills.

On our last day we went to Our Dynamic Earth an environmental science museum built on an old monastery. The pupils all loved it, and then did some great drawings of the buildings nearby including the Scottish Parliament and the Palace of Holyrood (Queen’s Edinburgh residence). I had some issues taking a group photograph due to tour buses. Once we got back to the main street of Edinburgh they had some free time to get their food for the train home. Mr Knowles and I found some students in the National Gallery of their own free will. 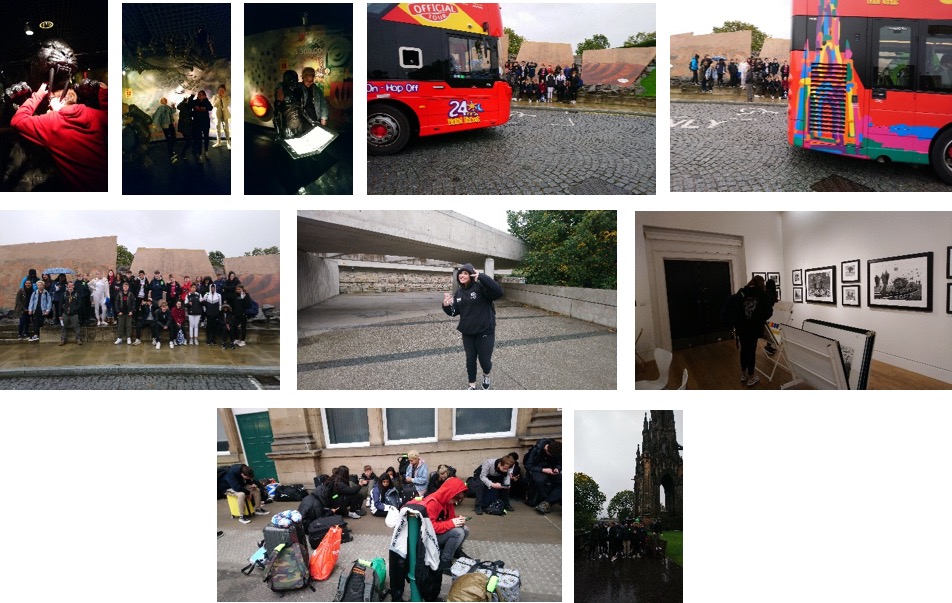 Once we all met up we made our soggy way back to London and had a happily uneventful journey back. I would like to say a big thank you to the students, parents, Mr Knowles and Mrs Armit who helped make all of this possible.