Back to Latest Articles
Play of the Month

A Midsummer Night’s Dream is believed to have been written by William Shakespeare between 1590 and 1596. It involves four young lovers called Hermia, Helena, Demetrius and...

King Lear is one of Shakespeare’s most powerful tragedies. It is full of love and hate, loyalty and treachery, cruelty and self-sacrifice. King Lear tells the story of a king in...

William Shakespeare’s Play of the Month – Othello Othello is one of the most powerful of Shakespeare’s tragedies. An intense drama of love, deception and destruction,...

Julius Caesar – Play of the Month

No More Articles
Play of the Month 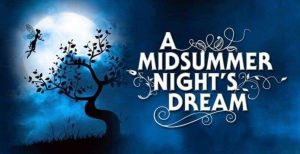 A Midsummer Night’s Dream is believed to have been written by William Shakespeare between 1590 and 1596. It involves four young lovers called Hermia, Helena, Demetrius and Lysander who flee from Athens and become lost in an enchanted wood. They stumble into a fairy world where King Oberon, and Queen Titania, are fighting over ownership of a young prince. Seeking his revenge on Titania, Oberon and his servant Puck begin a magical, yet farcical chain of events which becomes interwoven in a comedic and mischievous play with hilarious consequences. There is also a character called ‘Bottom’. Why not read the play to find out who Bottom is!

● In 1911, Herbert Beerbohm Tree staged a celebrated production of A Midsummer Night’s Dream which included live rabbits on stage.
● The two moons of Uranus are named after the characters of Midsummer Night’s Dream, Titania and Oberon. In 1787, the moons were discovered by William Herschel, a British astronomer.

On Tuesday 13th July year 7 students were extremely lucky to have a virtual meeting with Paralympic athlete and medallist Mel Clarke. Mel is a hugely successful international...