Posted 2 days ago by Unami Tenga

After the Christmas and New Year celebrations many of us have new year’s resolutions based around improving health and fitness. Despite the ongoing issues with covid the...

BOYS INTER HOUSE FUTSAL To finish off a very busy term of sport the boys in Years 7 -10 have been competing in indoor futsal tournaments in the sports hall. Futsal is a fast...

HERTS COUNTY FOOTBALL On Saturday 4th October Lucas G from Year 10 made his debut for the Hertfordshire County Under 15 football team in a match v Suffolk County. Lucas attended 4...

It was a real delight to join Mrs Cooper’s Year 7 PE class last week and see how much the girls enjoyed their netball lesson which had been superbly crafted and delivered to...

This half term brings a change in activities in PE lessons and students need to make sure they have the correct kit for all activities. An email has been sent home to all parents...

Well done to all of our students who have either regularly represented school teams or attended lunchtime and after school sports clubs this half term. It has been great to see...

FOOTBALL
Y9 Boys DISTRICT 6-A-SIDE TOURNAMENT Mr Burnell
Date : Monday 17th January 2022
Result : Tournament.
Squad : A. Gates, I. Harry-Brown, D. Ansa-Otu, M. McManus, G. Eldridge, K. Tinriover, S. Johnson, J. Roberts, J. Harris.
Commended performances : A. Gates, K. Tinriover, D. Ansa-Otu, I. Harry-Brown.
Comment: Monday saw the year 9 team play a 6-a-side tournament with teams from the local premier league. Considering the team were playing teams from the league above they gave a really good account of themselves. They never gave up and grew into the tournament the more games that they played. The team learnt a lot in which they will be able to take into their upcoming fixtures.

Y8 Boys v Grange Academy (District League) AWAY Mr Cartledge
Date : Thursday 13th January 2022
Result : Lost 18-6
Scorers : J Gladdy 4, M Tregear 2
Squad : J Gladdy, S Patel, D Mahmud, O Alao, A Dinu Juravle, A Linsdell-Turk, K McFarlane-Gentles, A Muraj, M Tregear, E Yilmaz, K Patel, W Towill, K Pamplona, E Ansa-Otu
Commended performances : J Gladdy
Comment: It was tough first competitive basketball experience for the year 8 boys who came up against a Grange team containing 2 or 3 much stronger, taller and more physical players. However the boys worked hard on defence and by the second half started to show a greater understanding of offence in a game situation. With improved shooting the game would have been closer. The boys will have learned a lot about the structure of competitive basketball and hopefully with more practice will show improvement for the next match.

GIRLS BASKETBALL – Yr8/9 Friendly v Queens AWAY Mr Harris
Date : Wednesday 12th January 2022
Result : Lost 26-14
Squad : A.Abraham, N.Donald, L.Wheaton, A.Choudhry, I.Palan, L.Qarib, M.Bazile, H.Kyei
Commended performances :
Comment: This was the first basketball match for the girls against a strong Queens side. The first quarter was a close contest, with each team only scoring one basket each. The second quarter, we were able to create more space on the court and started to create a number of chances where the second quarter finished 4 – 4. In the second half, the game opened up a little bit more and we took an early lead with a number of consecutive baskets. However, Queens started a fight back in the final quarter where the game finished 26 – 14. The girls acquitted themselves really well against a Queens team who had clearly been playing together for some time. 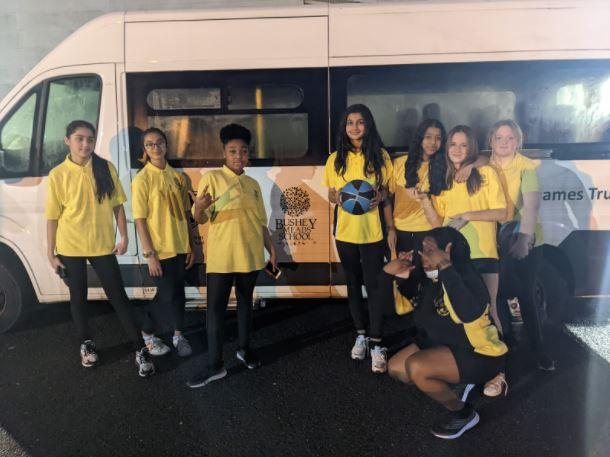 We are exceedingly proud of our students here at Bushey Meads School and we are endeavour to recognise hard work in all forms. The pastoral team are privileged to work alongside...