NEWS Sports Leadership On Thursday 16th January the Year 12 CTECH Sport and Physical activity group had their first taste of practical leadership when they took a Year 9 class for...

NEWS Mr Cartledge Head of PE and Health It was great to see so many students actively involved in Inter House sports events before half term. This included all KS3 students taking...

National Fitness Day 2019 took place on Wednesday 25th September, the aim being to get as many people as possible involved in exercise so they can experience the benefits of...

On Thursday 16th January the Year 12 CTECH Sport and Physical activity group had their first taste of practical leadership when they took a Year 9 class for a basketball lesson. The year 12’s have been completing assignments on the roles and responsibilities of leaders in sport and using this to develop their understanding of sports coaching. Although apprehensive about leading themselves they took to the task well showing enthusiasm and improved communication as they took the Year 9’s through a warm-up, skills drills and then game play (see pictures). Basketball is a very popular sport at Bushey Meads and it was great to see the year 9 boys responding so well to the 6th form leaders. The sports hall was a hive of activity as the 4 groups worked really hard. The feedback from the year 9’s was really positive and it was great to see the 6th form students grow in confidence as the sessions progressed. Well done ! 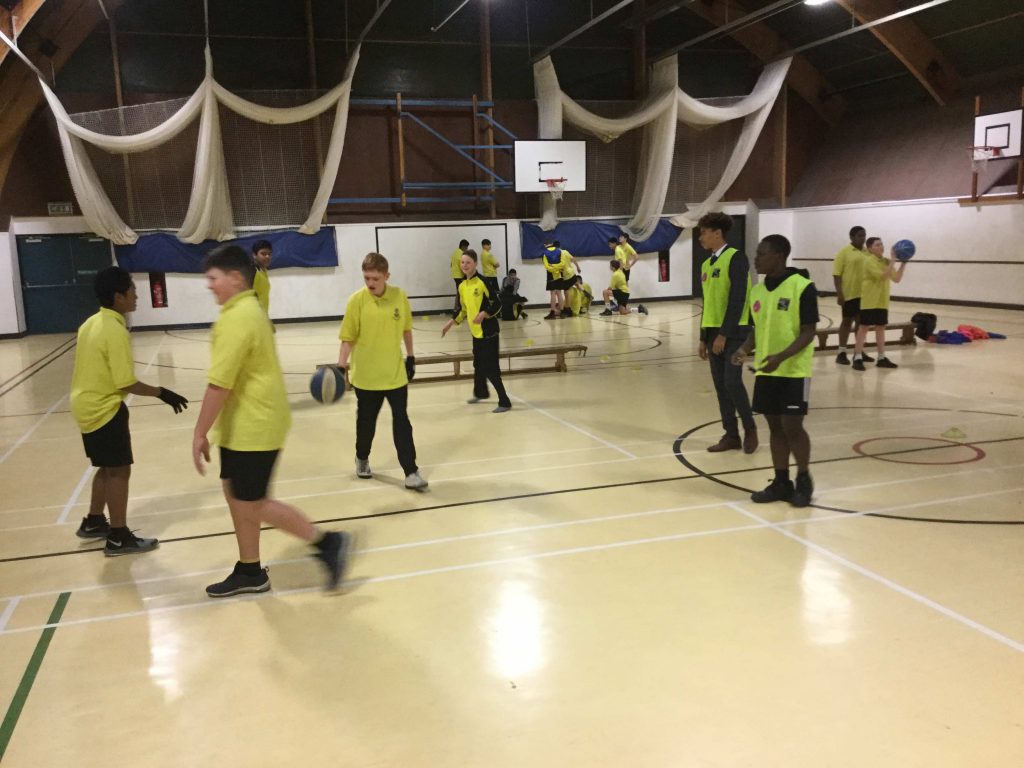 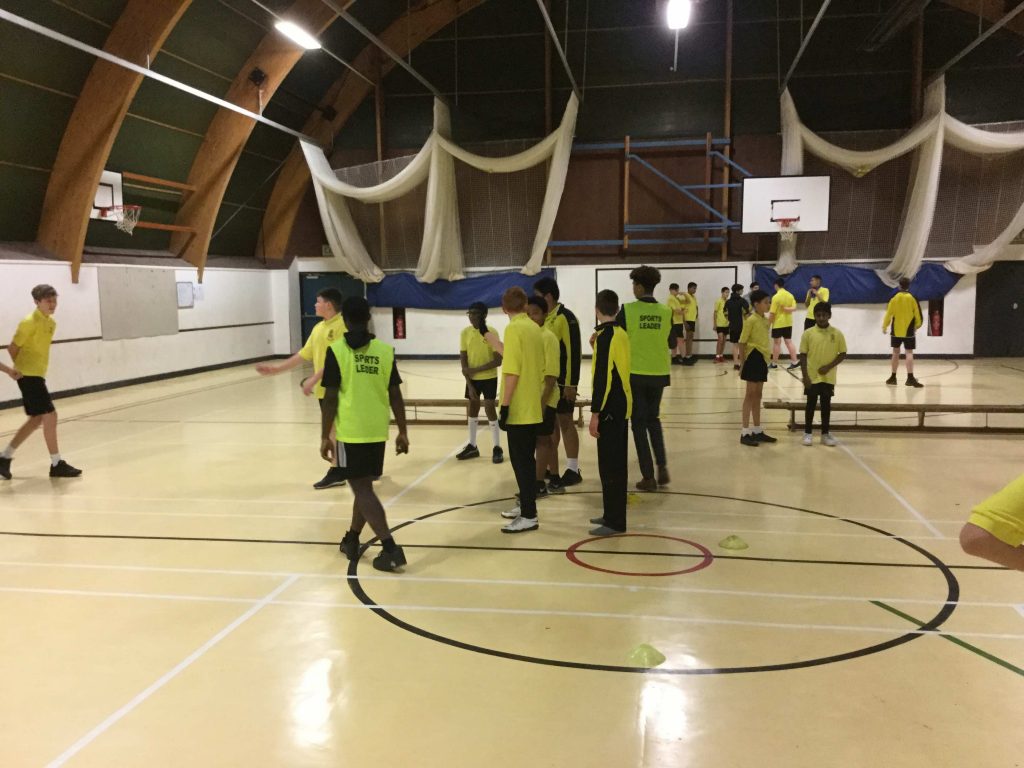 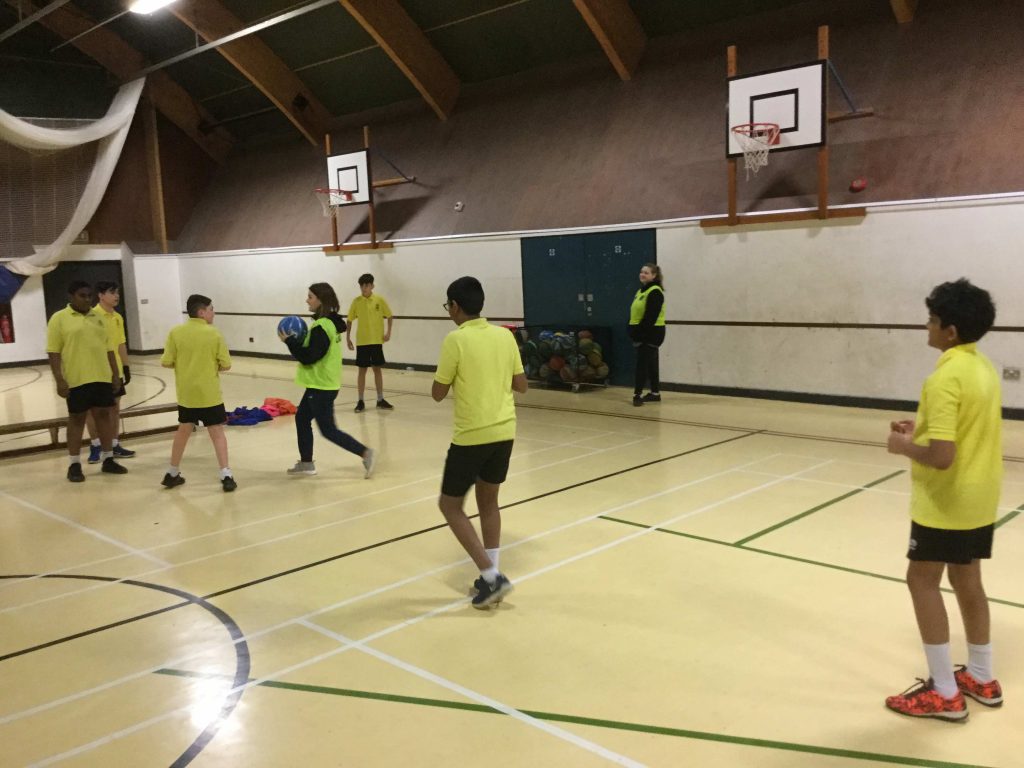 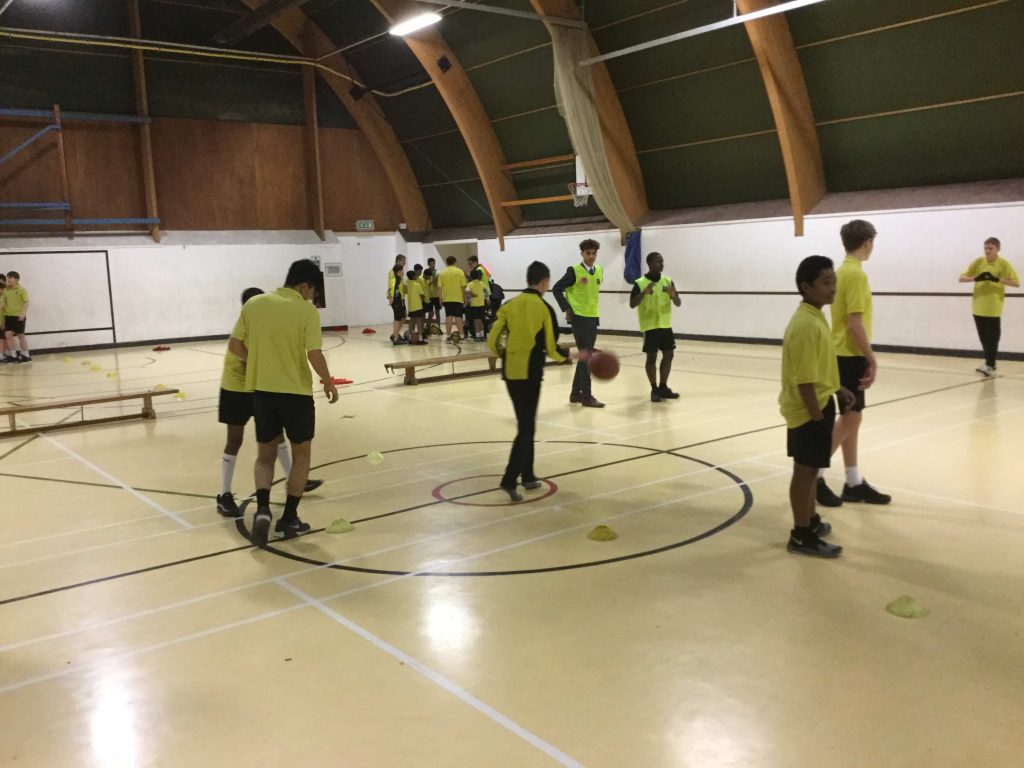 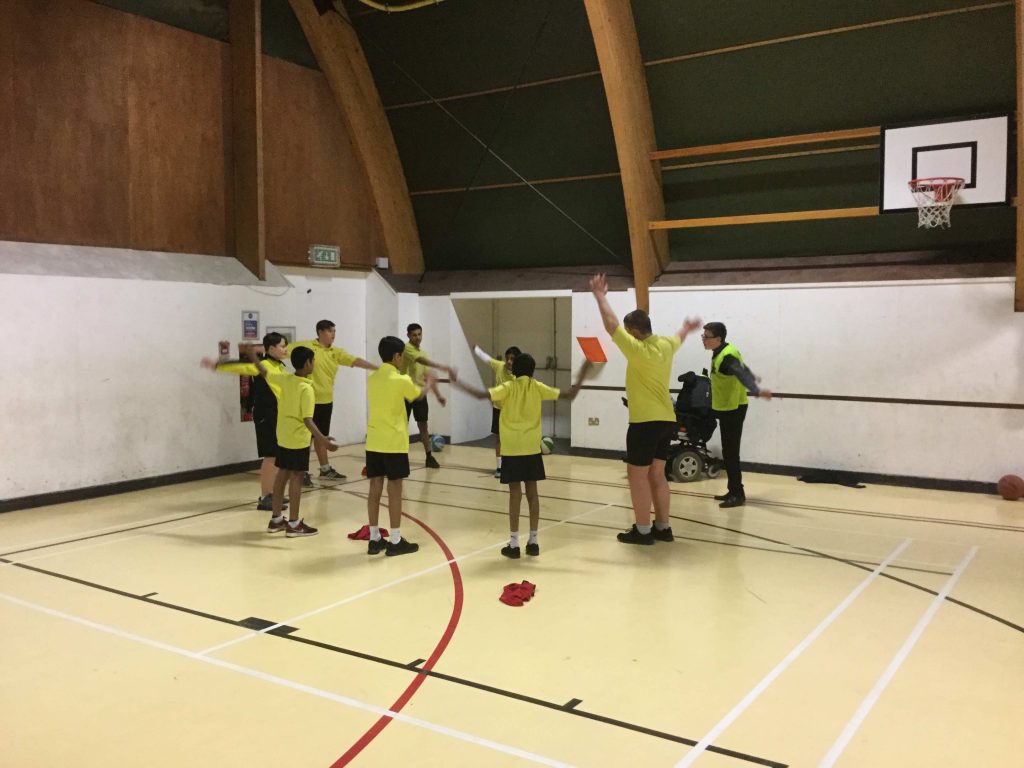 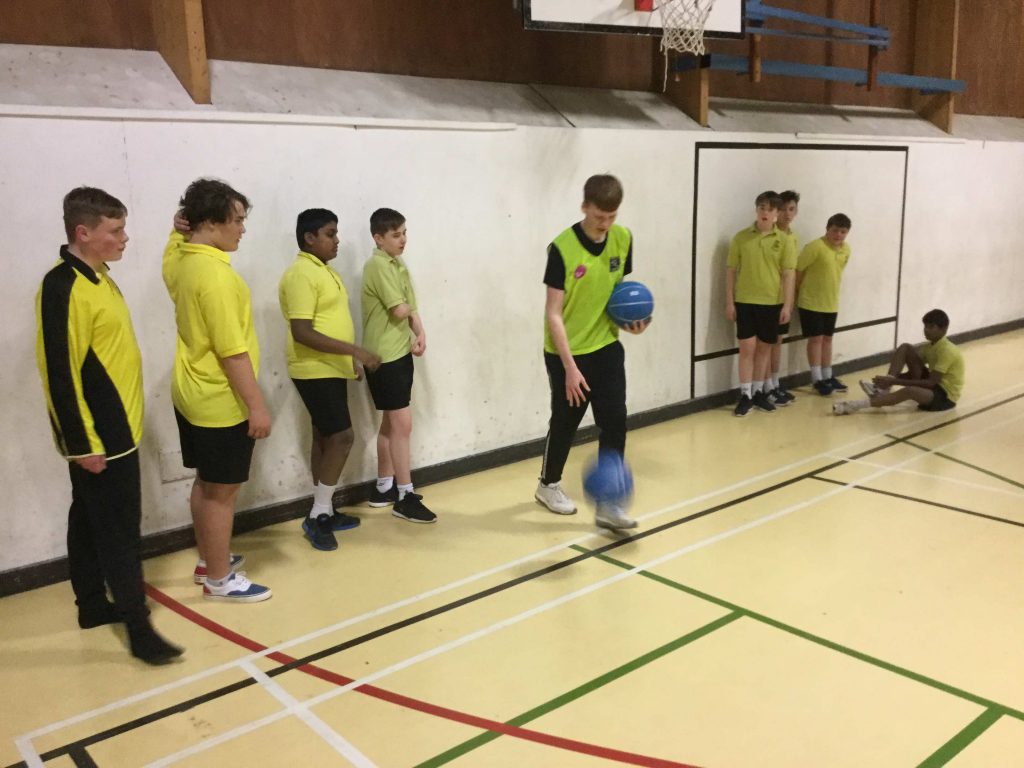 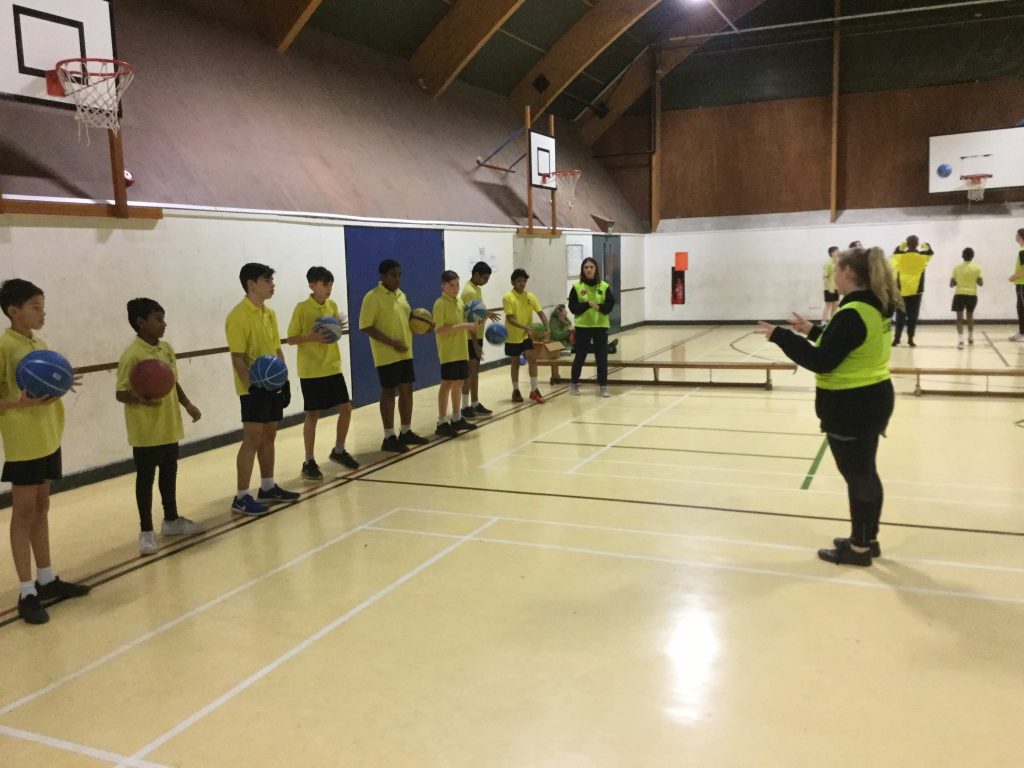 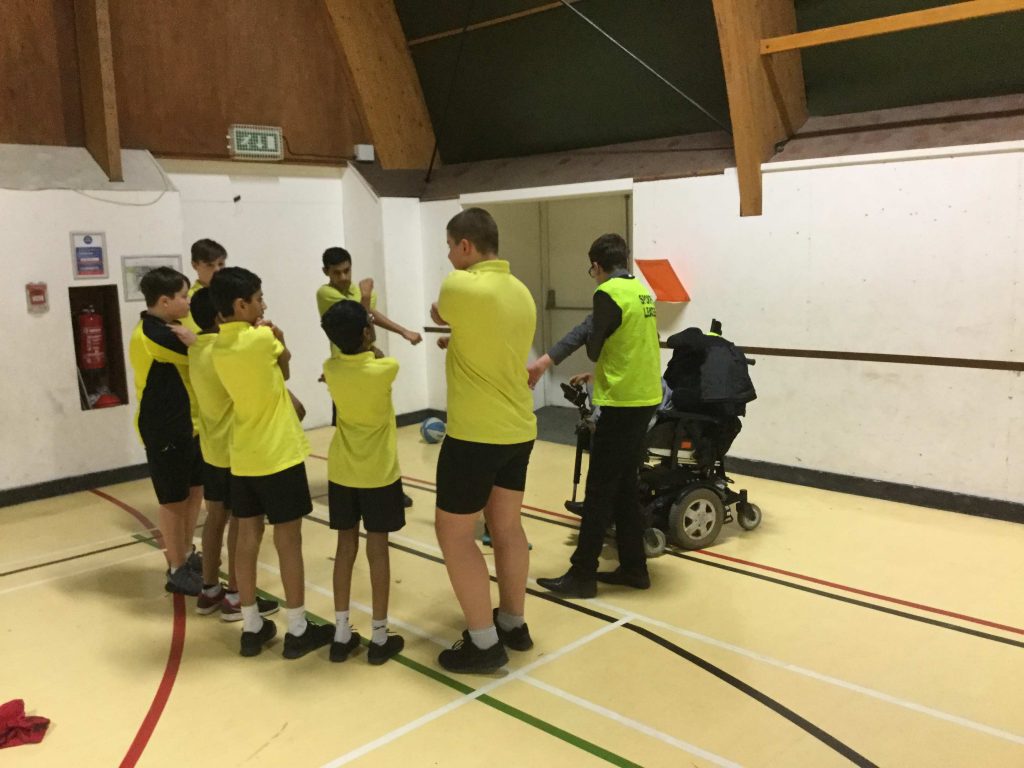 We are also about to register the next cohort of Year 10 leaders on the Level 1 Sports Leadership qualification. Leadership is a key part of the sports provision at Bushey Meads and the student leaders play a significant role in the extra-curricular programme at the school and the BSJT sports events. We look forward to hearing how they progress over the next few months.

Comment : We travelled up to Hertford last Thursday lunchtime to play Simon Balle in our second round of the County Plate Competition. The game was a very tightly contested one, which saw both teams struggle to maintain possession for sustained periods, due to the challenging January conditions and the difficult surface. It was a game which would have frustrated a lot of players, particularly as we are used to having the ball on the floor and moving it quickly between the thirds. However, the boys adapted very well and showed great character to clinch a late winner from a J Sims free kick, just outside the box. Spirits were high on the journey back to Bushey and the boys are looking forward to their next encounter.

Comment : In a very tough competition with all Premier League teams represented the Year 9 boys put in a spirited performance and were unlucky not to get more than one win. After winning the first game 2-1 the boys then suffered 3 narrow defeats but in all games they were competitive and had chances before a draw in the last game saw them finish 5th out of 6 teams. R Ismaili was the key player on the night showing excellent close control and dribbling skills throughout. It has been a tough season for the boys but their effort and commitment on the night was excellent. 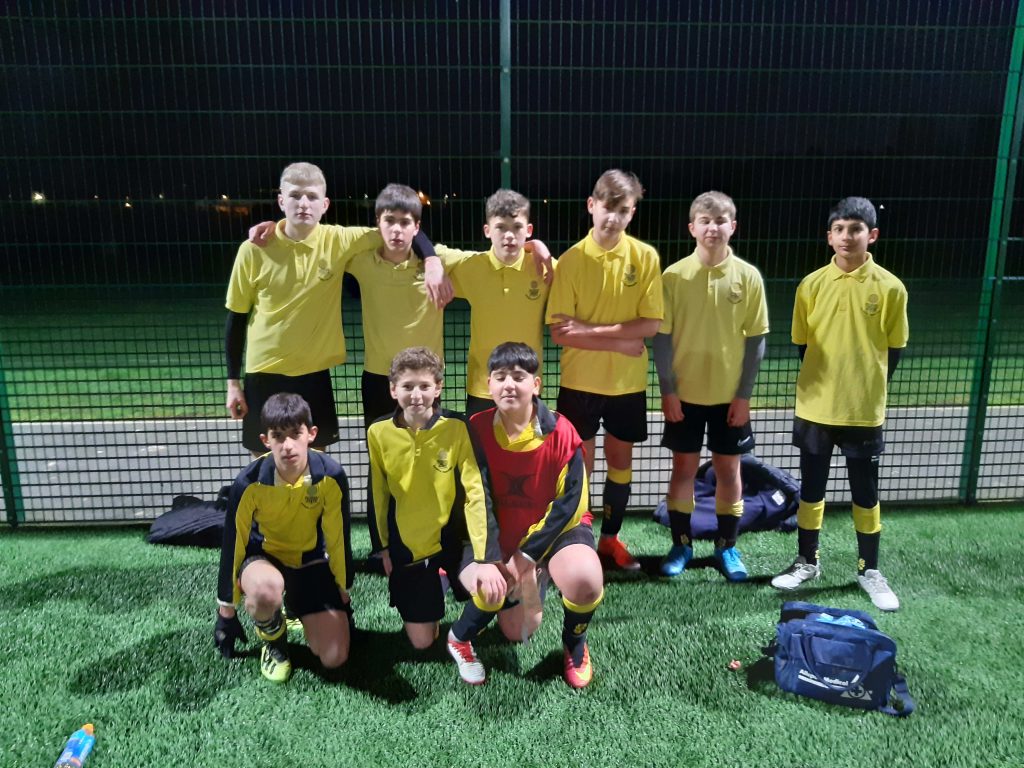 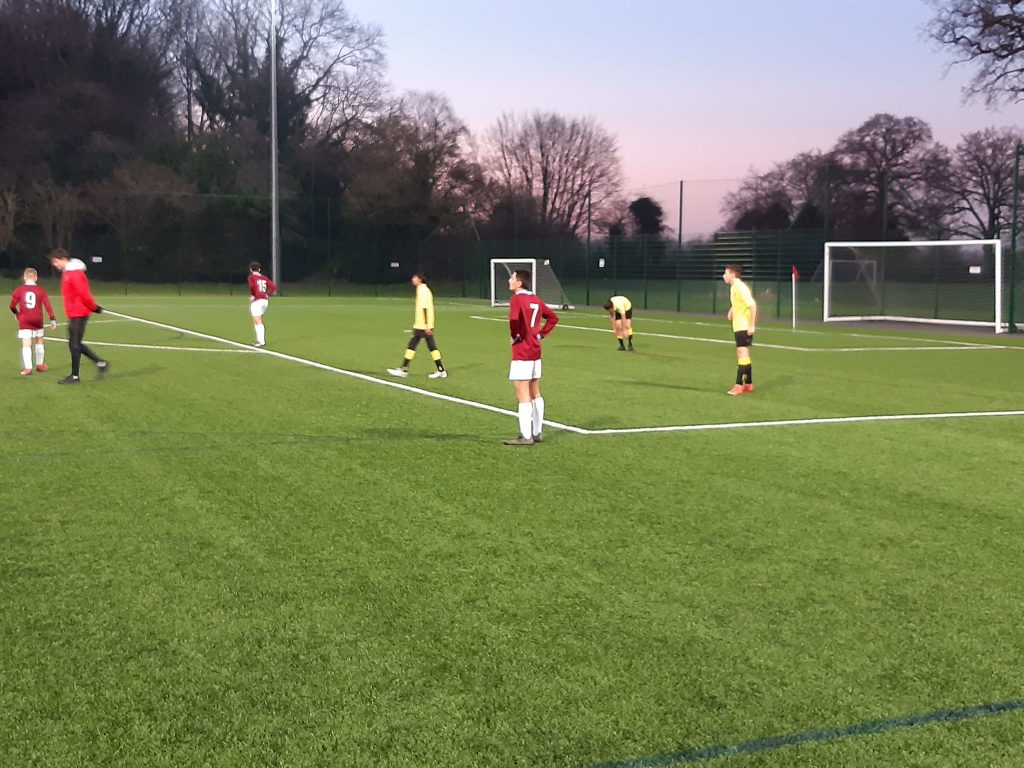 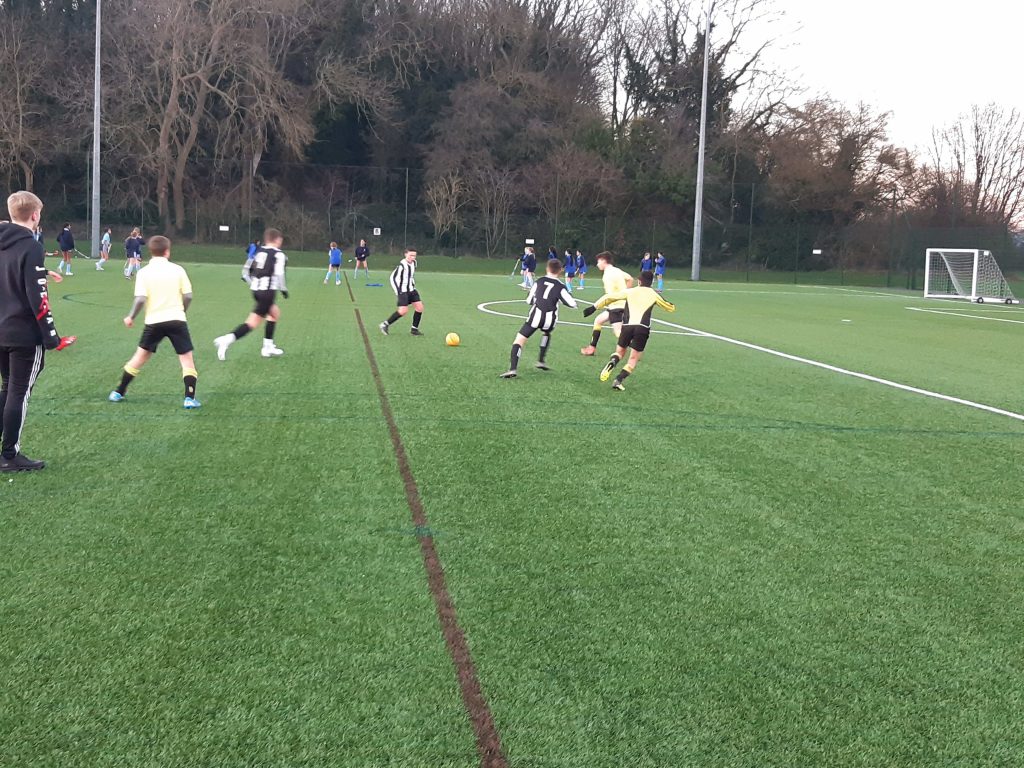 Comment: The Year 10 boys put in a spirited performance in a very close first match of the season. The first half was very tight with both teams struggling to break down strong defences. However a strong 3rd quarter from the Academy team was the difference in the end with 3 3 point shots giving them a lead that the Meads Boys couldn’t pull back. Special mention to Alfie H and Matt K who worked tirelessly around the basket showing much improved shooting and rebounding technique.

Comment: Thursday saw the year 7 basketball team play their first game against local rivals Bushey Academy. The team started really well as they created a number of chances to score, which they took as they were excellent in front of the basket. The second quarter saw the home side came back into the game and close the gap to only a couple of points. However the team showed excellent resilience to regain their 10 point lead as once again their shooting was excellent. The final quarter saw the team extend the lead by another couple of points as well as showing their excellent defensive qualities. Well done to all.

Comment: A very close match from start to finish. The boys worked well together and enjoyed their first game of the season. Unfortunately, we couldn’t get the win but lots of positives to take away and build on for the rest of our matches.

Comment: What a terrific performance from our girls against a strong St. Margaret’s team.  The score line was even throughout the game with both teams taking the lead at various stages.  The final result could have gone either way and luck was just not on our side in the final quarter.  A great performance from the entire team though. Well done!

Commended performances : N. Donald for her exceptional pace and agility

Comment: The first game for the squad this year and tough opponents to choose!  The girls started off in a promising fashion, getting plenty of shots in with lots of possession in our attacking half.  St Margaret’s were blessed with a strong, tall GA who eventually broke through our defence and did not miss a shot!  As ever we battled to the end and managed to score 2 fantastic goals.

Commended performances : Ruby Richards and Olivia Hansen for strong defending in the circle.

Comment: This was an impressive game for the year 8 team against a strong team.There were accurate passes down court and good defending by all players. In the last quarter we managed to level the score but unfortunately Parmiters scored 2 goals in the last 5 minutes. Well done girls.

Comment: Unfortunately we did not have our full squad out for this tough game. The girls started well with some impressive shooting by Skye and Ellie. Parmiters however were strong in all areas and began to take a large lead. As always the girls battled hard and never gave up. Thanks to R Richards and K Chandarana for helping out the year 11 team.

Commended performances : A.Ashar voted for by the opposition, K.Kovarova for tireless work up and down court.

Comment: A tough game for the year 8 team, the scoreline was not a true reflection of the game and the girls never gave up.  SCD had some very tall girls who made it very difficult for our shooters to get their shots away and at their attacking end they had some outstanding shooters who rarely missed a shot.  The Bushey Meads team should be proud of their efforts.

Commended performances : A.Hutchison who worked tirelessly throughout the game holding the centre court together.

Comment: A really close game which started with SCD taking an early lead before BMS pulled away and managed to hold on in the final quarter.  With a hostile crowd supporting the SCD team the BMS girls had to focus hard on their own performance and make sure they played with accuracy and control, which they did and the victory was well deserved.

As the year 11 girls come to the end of their netball matches at Bushey Meads it should be said that they have been an absolute privilege to work with over the past 5 years.  Special credit should be given to Mrs Cartledge for all her hard work and coaching with this lovely bunch of young ladies.

Comment: It was a pleasure to take a mixed year group team to St.Margarets for a friendly badminton festival.  The team was made up from a range of students; some using badminton as an activity area as part of their GCSE PE course, a number who have enjoyed badminton in KS4 PE and those who come to extra-curricular badminton club.

After a warm up session the girls played doubles against their opposition in timed matches rotating round to get maximum playing time.

It was great to see lots of competitive and energetic play from all those taking part and lots of points being won by the Bushey Meads team. The games were tied and 8-8 going into the final round but a strong BMS performance saw the girls win every game in the last group of games to secure a 12-8 victory. However perhaps the most pleasing part of the evening was the smiles and obvious enjoyment the girls had from participating in such an event.  Well done everyone and we look forward to more similar opportunities in the near future.

Student of the Week – Issue 69

Key Stage 3 Angela 8 Beech – Angela is an excellent ambassador for the school and a diligent and dedicated student.  Angela has over 250 achievement points and actively...