Student of the Week – Issue 20

Key Stage 3 Megan 9 Willow  – Megan is an exceptional student who has always given her best in every aspect of school life.  Megan has made an excellent start to this...

Many subject and faculty areas at Bushey Meads have seen significant year on year improvements over the last four years and our inspirational Design and Technology Faculty is one...

Auditions for this year’s musical have already started and the quality of the auditions have been outstanding! We will be holding two more rounds of auditions this week and we ask...

Over the last four years our popular and successful Sixth Form has grown in both quantity and quality. Outcomes for the all important value added performance measures place our...

It’s All About Learning

Our Learning Resource Centre really is a hub for learning at BMS. It was great to see so many Sixth Form students making the most of the inspirational and well managed learning...

What a magical afternoon we had honouring all the newly appointed Student Leaders to the school on Tuesday afternoon.  Over 250 students from years 8-13 filled the tiered seating...

The start of a new term sees the start of a new programme of sport and physical activity practices, clubs and competitive fixtures. Last year many of our students took the opportunity to build on their performance in lessons by attending the many extra-curricular clubs that are available at lunchtime and after school. This year we will be holding clubs in football, basketball, rugby, hockey, table tennis, badminton, gymnastics, trampolining, cricket, rounders, tennis, cheerleading, boxercise, yoga, fitness, SEN sport and athletics as well as our very popular lunchtime recreational sports clubs for each year group. Many of the clubs are run by the PE and Health Faculty staff with additional clubs being provided by the Hertfordshire Sports Partnership. Clubs take place at lunchtime and after club and this is supplemented by an extensive range of friendly, District and County competitive sports fixtures. All are free of charge and open to all students. 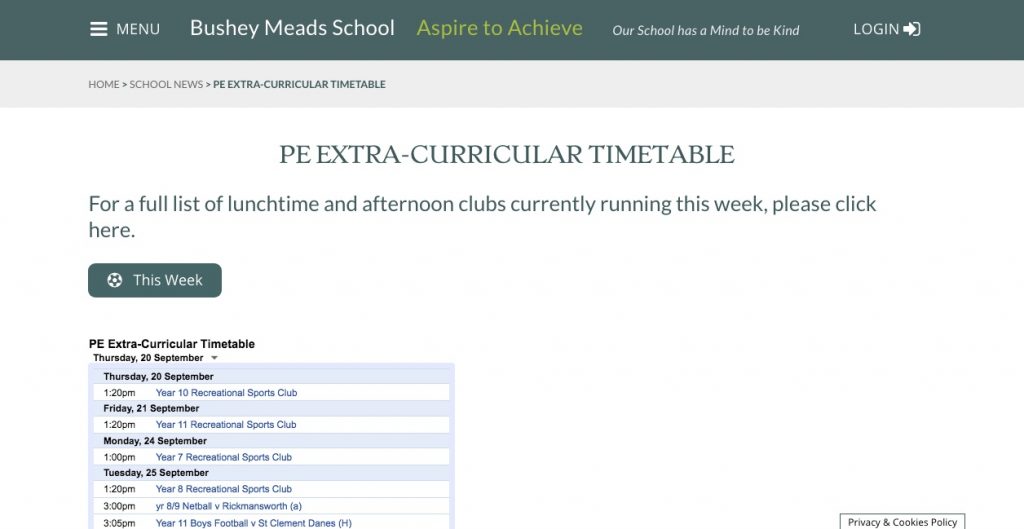 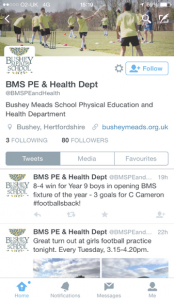 In addition students can check the notice boards in the boys and girls changing rooms. The PE and Health Faculty also have their own Twitter account which includes regular updates on fixtures, match reports and details of forthcoming events.

Students selected for teams will receive team sheets with start and finish times. Some clubs may change week by week depending on fixtures and meetings but parents should check the twitter account and the website for updates.

For any parental enquiries about any aspects of PE contact the Head of PE and Health Faculty Ashley Cartledge [email protected] . For any specific issues related to Girls PE and girls fixtures contact Sarah Cooper [email protected].

Great News… Congratulations to Lucie K in 9Oak who has been selected after a number of trials to represent Watford Ladies Football Club.  This is a fantastic achievement and one that she has worked very hard for. We look forward to updates on her progress. 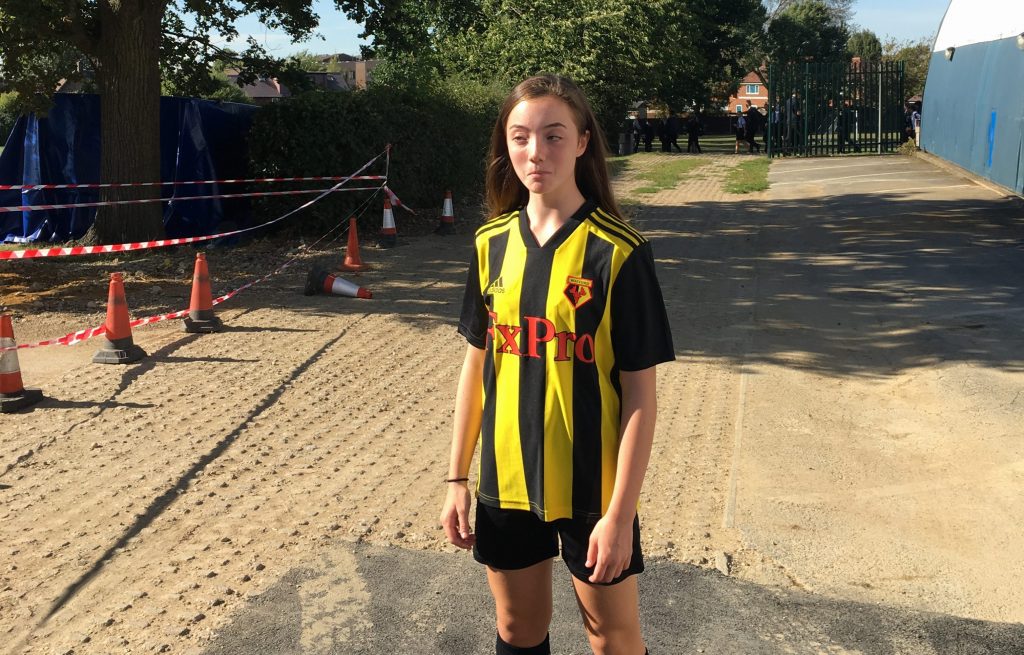 Congratulations to Max M in 9S and Ronan I in 😯 who have both been selected for the Watford District Schools Under 14 and Under 13 squads following last weeks trials. In the first round of matches v North Herts District Max scored to get his season off to a great start. We look forward to hearing how the boys progress over the season. 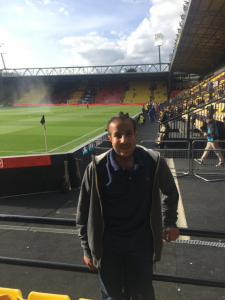 Finally a big Thank You to Watford Football Club in their support of the Bushey Meads Disabled students.  Once again we were offered tickets to the Premier league match between WFC and Manchester United that took place on Saturday.  Parth 8Elm and Parag 11Beech both took up this fantastic opportunity and thoroughly enjoyed their experience.

Comment : An excellent start to the season for the 1st XI football team who controlled the game for long periods showing some very pleasing passing football. A fantastic hat-trick from Connor C and a superb free-kick from Finley O’R were highlights. 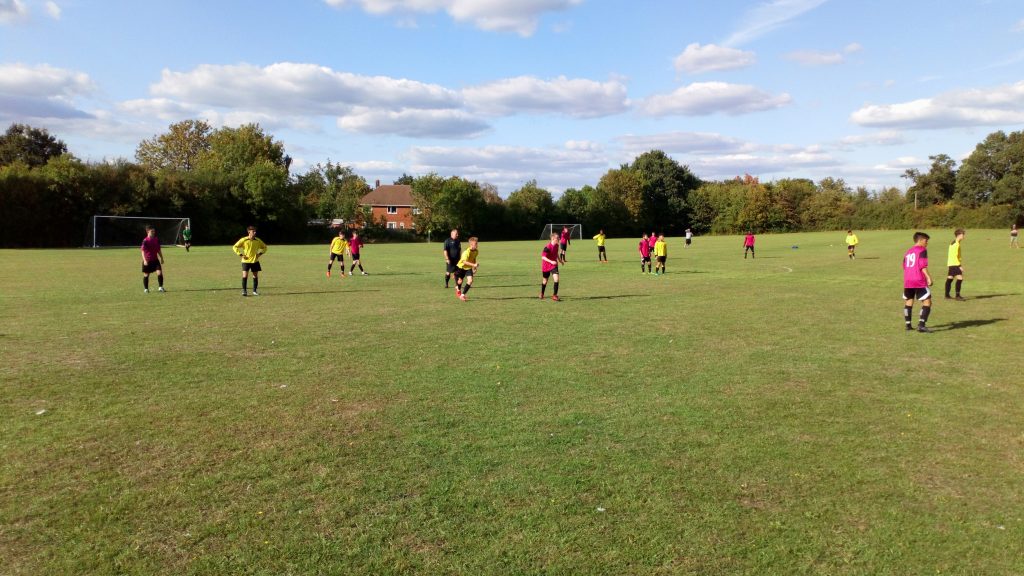 Comment : A severely injury affected team put in a spirited display against a strong SCD team in the second match of the season. The boys battled hard and had some decent spells of possession but could not make the breakthrough after conceding a couple of early goals.

Comment : A very positive start to our footballing experience at Bushey Meads School. Our first saturday fixture was a challenging one where we faced a strong and energetic Queens B side. Despite being 1-0 down at half time, the team displayed great resilience in the second half to pull the game back to 3-3, thanks to a spectacular free-kick from David B.

Comment : Our first district league game saw us away at Bushey Academy where we introduced our new attacking formation. This was a positive outing for us, which saw us take a 3-1 lead into the back end of the second half. Unfortunately, we conceded two late goals which meant that we drew the game, but we are very happy with our teams performance in the league and are looking forward to our next game! 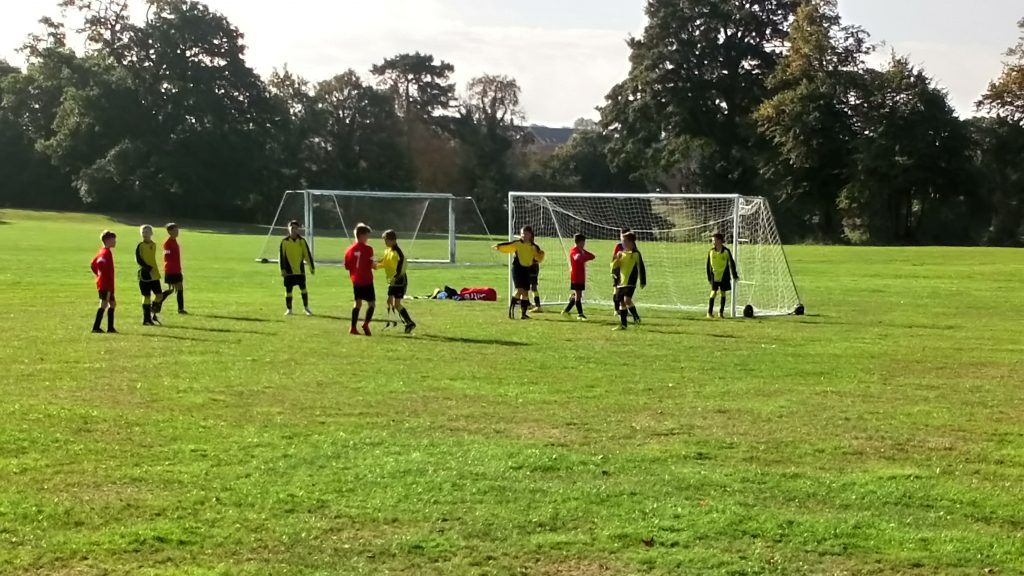 Comment: Our first district league game of the season saw us come up against a good Queens B side on a fine saturday morning. The team was only introduced to their new formation earlier that week so was always going to take a few matches to get used too. This turned out to be a positive outing for the team, which saw us win 6-4; turning a 2-0 deficit around. There was some fantastic play from the whole team in the second half, which are very encouraging signs for the rest of the season.

Comment : Monday saw our year 8A team play their second District League game away at Bushey Academy. After a strong performance against Queens B on Saturday the team came into the came full of confidence. However due to a slow start to the game it saw us into halftime trailing with a lot of work to do to get something out of the game. The team responded well in the second half but unfortunately were unable to turn the halftime deficit around. There are plenty of positives that can be taken from the second half display into their next game. 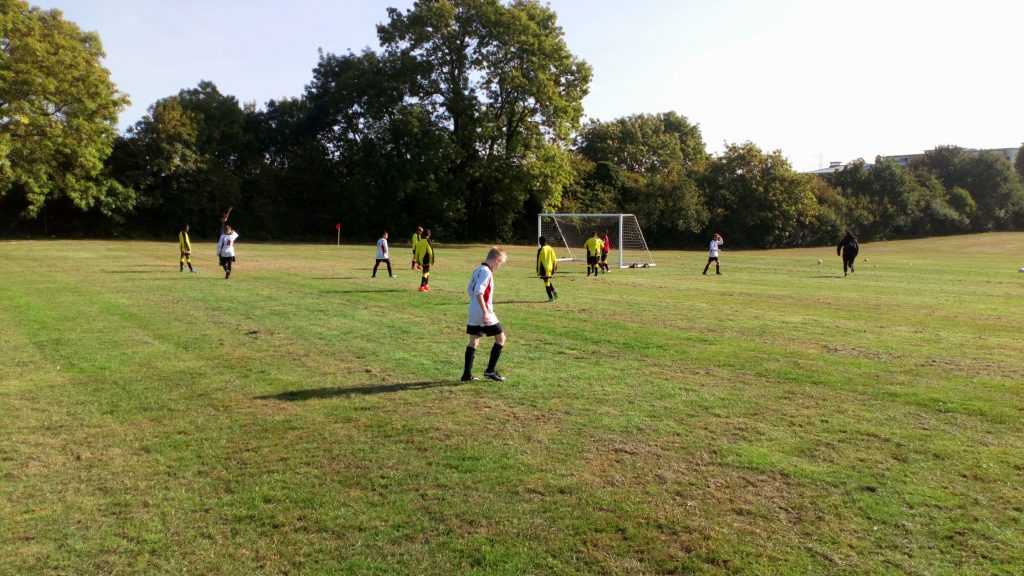 Comment : A tough game for the boys that ended in defeat. The Bushey Meads team did not give up and attempted to play good passing football from start to finish.

Comment : A very good display from the team against a larger and more physical opponent. Keeping the ball and choosing the correct pass found space and with the clinical finishing of Reid playing his first game a striker the BMS team were too strong for the Bushey Academy team.

NEWS The BMS PE and Health Faculty prides itself on promoting sport for all and encouraging all of our students to lead a healthy, active lifestyle. In addition an extensive range...