The Tempest is one of Shakespeare’s most famous comedies and one of his shortest plays. Written around 1610–11, it is believed to have been his last play before retirement. Set on...

Hi everyone Yet again we are now in a new lockdown with most student’s home learning once more. Let us remind ourselves of the amazing work our anti bullying ambassadors have done...

The Movies Come To Bushey Meads

Drama has its challenges for remote learning. A subject that traditionally relies on extensive group work and plenty of close interaction was always going to provide us with...

Good afternoon Mr Turner and All the Teachers and Associate Staff at BMS. I just wanted to write this email to thank everyone at BMS for all the amazing work they are doing. I...

As a school we have always been outward facing and willing to share best practice with schools across the country for the benefit of helping all children Aspire to Achieve and...

It is always great to hear how our Humanities and Social Science students are exceling with their remote learning. Jessica Levitan, a Yr 8 student, has been asked by Head of...

Going the Extra Mile for Colleagues

Despite being unable to be at school last Friday, Head of Geography Miss Dunsby pre-recorded a voice-over on her Friday Faculty PowerPoint to be able to speak ‘live’ to teachers...

Kindness Thought of the Week

Designers on the Horizon

Over in technology, we have launched some new projects with our students, challenging students to get ‘hands on’ and stuck in to some practical tasks. Year 8 student Ben Rutter...

Mrs Hoskins was teaching year 11 who were completing pieces on the theme of ‘Reflections’. Each students with a different idea. Ella Cannon felt that the theme reminded her of the...

The Tempest is one of Shakespeare’s most famous comedies and one of his shortest plays. Written around 1610–11, it is believed to have been his last play before retirement. Set on a remote island, Prospero, long exiled from Italy with his daughter Miranda, seeks to use his magical powers to defeat his former enemies and regain his title as the rightful Duke of Milan. He hones his magic, and eventually creates a storm that brings his enemies to the shore of the island he has come to control.
A couple of fun facts:

• The Tempest is the most performed play in the history of the BBC.
• Uranus’s moons are named after characters in The Tempest. 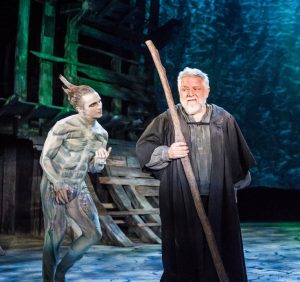 Word of the Week: Lavish

Encouraging your child to write is an important way to support their development both academically and as a person. As research indicates writing enables young people to express...