Back to Latest Articles
Reading

The Year 11 Food Preparation and Nutrition GCSE group completed their final food assessment. This assessment is part of their NEA 2 which is worth 35% of the total GCSE. They had...

On Friday 14th February, 3 of the yr12 Fine Art students went with Miss Cole to Little Reddings school to help yr4 students paint the 2nd half of their outdoor mural, based on the...

The packed audience in the Main Hall enjoyed a simply stunning evening of music and dance performances on Wednesday evening of this week. Talented musicians, dancers and...

Student of the Week – Issue 72

Key Stage 3 Imogen 7 Elm – Imogen is a hardworking and conscientious student who has made an excellent start to her BMS journey. She has an excellent attitude to learning,...

If someone you love 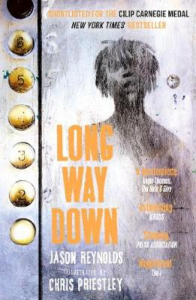 who killed them and

A 5 star must-read book written by Jason Reynolds, takes place in sixty seconds as the protagonist goes down an elevator having a choice to murder the person who killed his brother or not.

inside of you is on the inside

you never want to

see it on the outside of them.’

As 15 year old Will ( William ) is in the elevator down to the lobby, with a gun in the back waistband of his jeans, he encounters people that are related to his brother. BUT THEY ARE DEAD. Every stop one person (a  dead person) walks in, telling Will a bigger part of the story he knew about what happened to them and how they died, each story giving him an option to kill or not kill.

This is a beautiful book written in small poems and I would highly recommend it.

Best Way to Start to the Day

Having recently introduced our new CDC ‘Reading Fridays’ it has been really powerful to see first hand the impact of these dedicated sessions. For 20 minutes the whole...

Mr Dowty’s Year 9 CDC group are participating in guided reading sessions in CDC time on Friday mornings as part of our continued focus on improving literacy and reading at...