Student of the Week – Issue 61

Key Stage 3 Alex 9 Willow – Alex is a hard working and dedicated student who always does his best!  He is an excellent ambassador for the school and this was demonstrated on...

On Monday 4th November 2019, all staff across the BSJT convened at Bushey Meads School for our annual conference.  We were delighted that this year, we were also joined by staff...

Scientist of the Week – The Unknown Scientists – Issue 61

Kindness Thought of the Week – Issue 61

Act of Kindness in the Community

The whole school mantra, Our School has a Mind to be Kind, is discussed frequently with students and the wider community with everyone encouraged to participate in Acts of...

And we’re off- A fabulous week of reading at Bushey Meads!

The reading partners scheme launched on Monday 11th November with a range of year 8 and 9 student buddies meeting their year 10 and 12 reading mentors for 15 minutes during CDC...

On Tuesday of this week we held our now annual Governors’ Day and 9 of our hardworking governors were in school for a variety of activities designed to support the ongoing school...

Head of History Mr Lyley and six superb students leaders led our Main School Assemblies this week focussed on the theme of Remembrance. They encouraged us to think and reflect on...

From Wednesday the 23rd to Tuesday the 29th of October 2019, there was a History and RE trip to Berlin and Krakow. It was organised and run by Mr Lyley, Mr Malik and Mrs Paddick. Early morning, on the 23rd of October, we arrived in at the Schoenefeld Airport in Berlin and visited the German Historical Museum, the Olympic Stadium and the Reichstag. 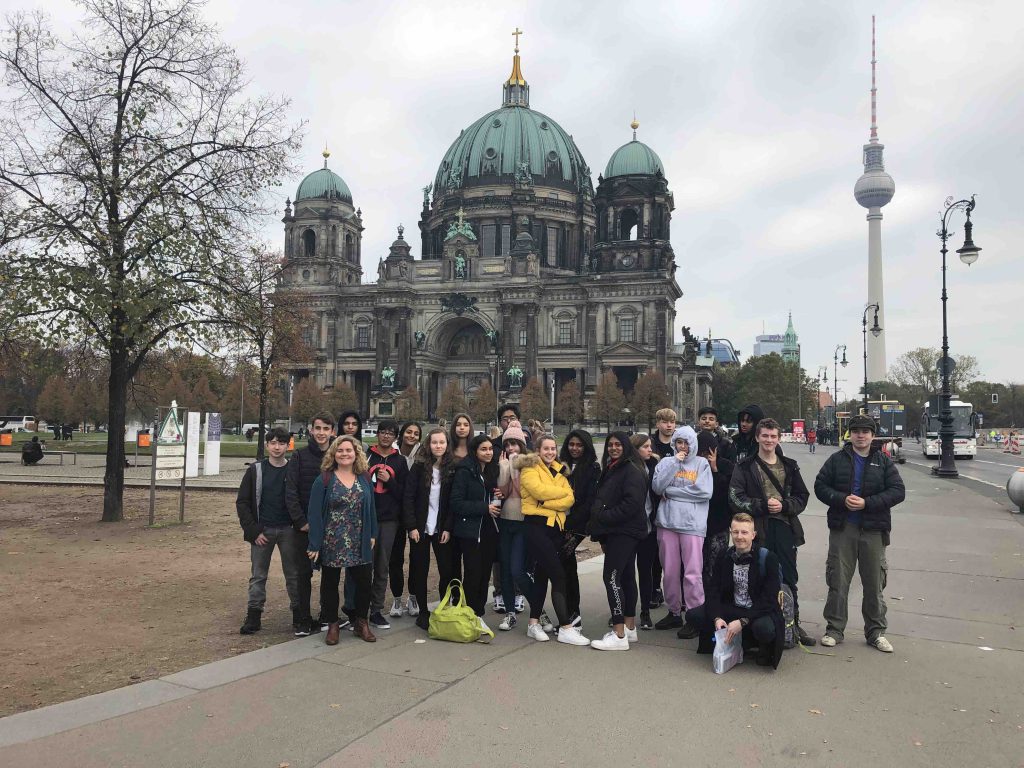 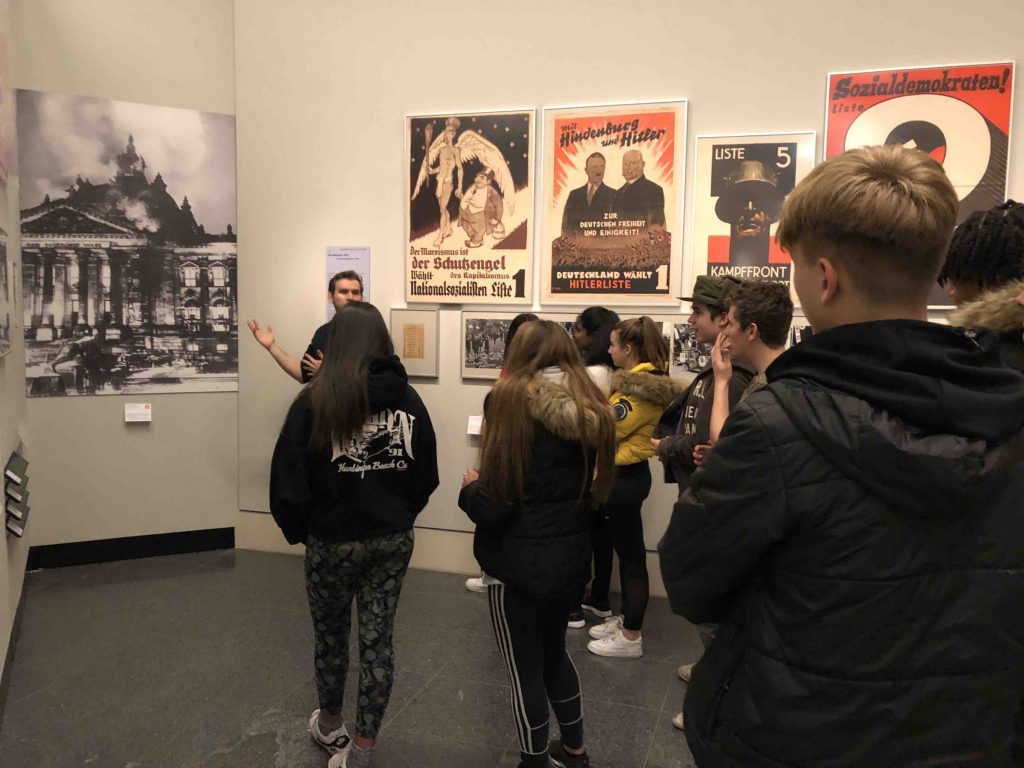 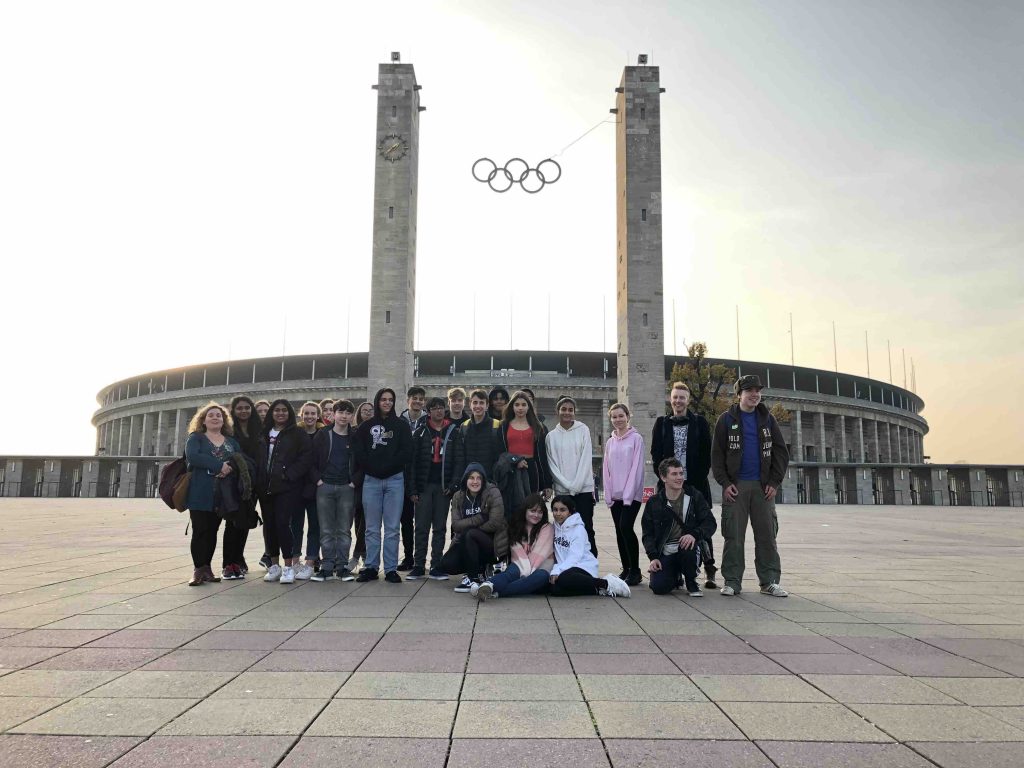 We first received a guided tour at the German Historical Museum where we learnt about the general history of Germany, which became unified in 1871. After this, we went to the Olympic Stadium where we received a guided tour and learnt about the importance of the Olympics and sport in German History. This stadium is significant because it was home to the Olympic Games in Berlin, 1936, in which Jesse Owens competed, and beat Hitler’s ideology of Aryans being the ‘master race’ by earning 4 gold medals. 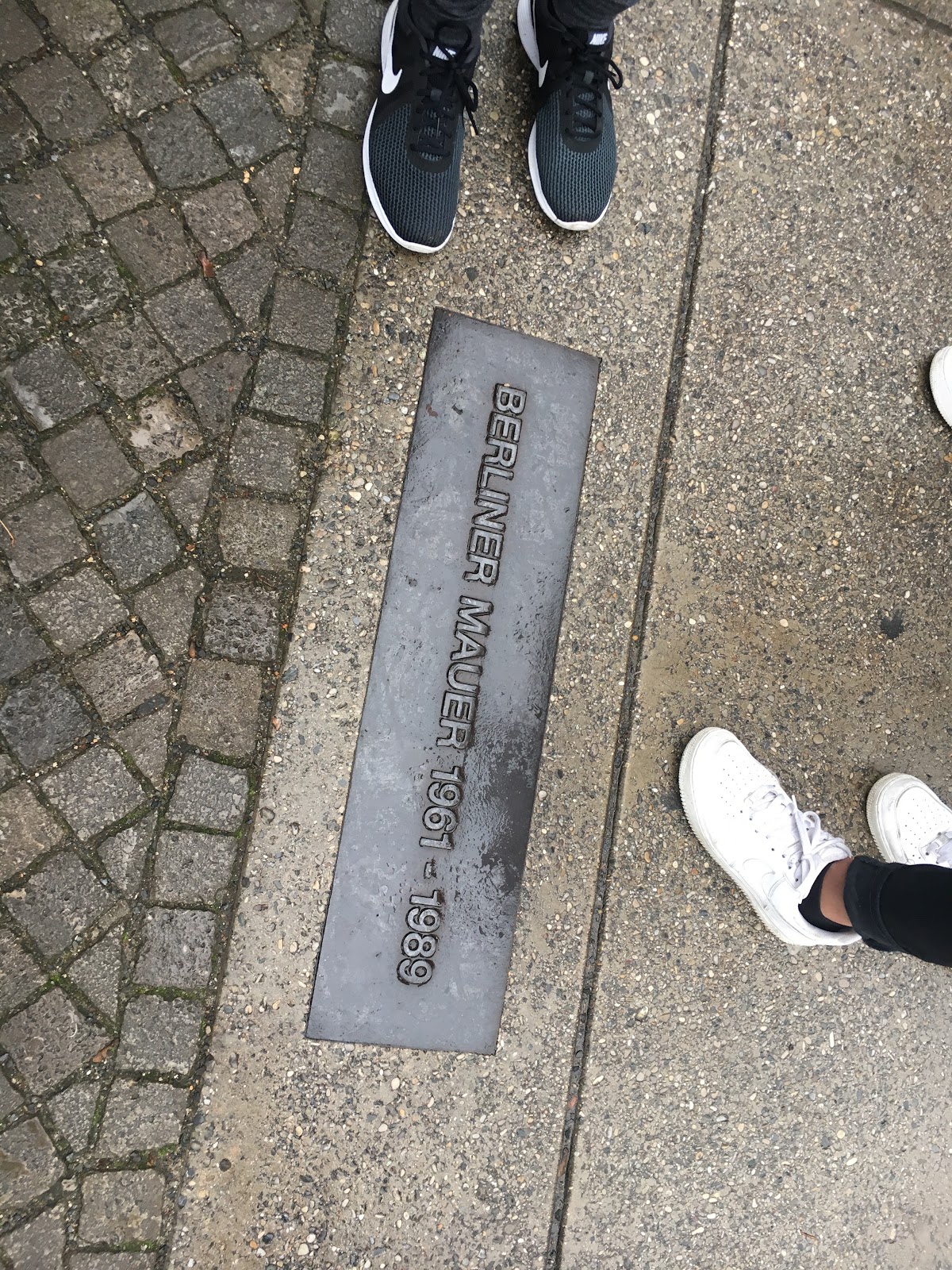 On the second day, we had a walking tour of Berlin where we learnt about monuments around Berlin. We saw a sculpture of Georg Elser’s face, a man who failed to assassinate Hitler in 1939. We also visited the Topography of Terror. Here we learnt about the Gestapo, the SS and the methods they used to scare people in and around Germany. After this, we saw the remains of the Berlin Wall and learnt how to tell if you were in East or West Germany. 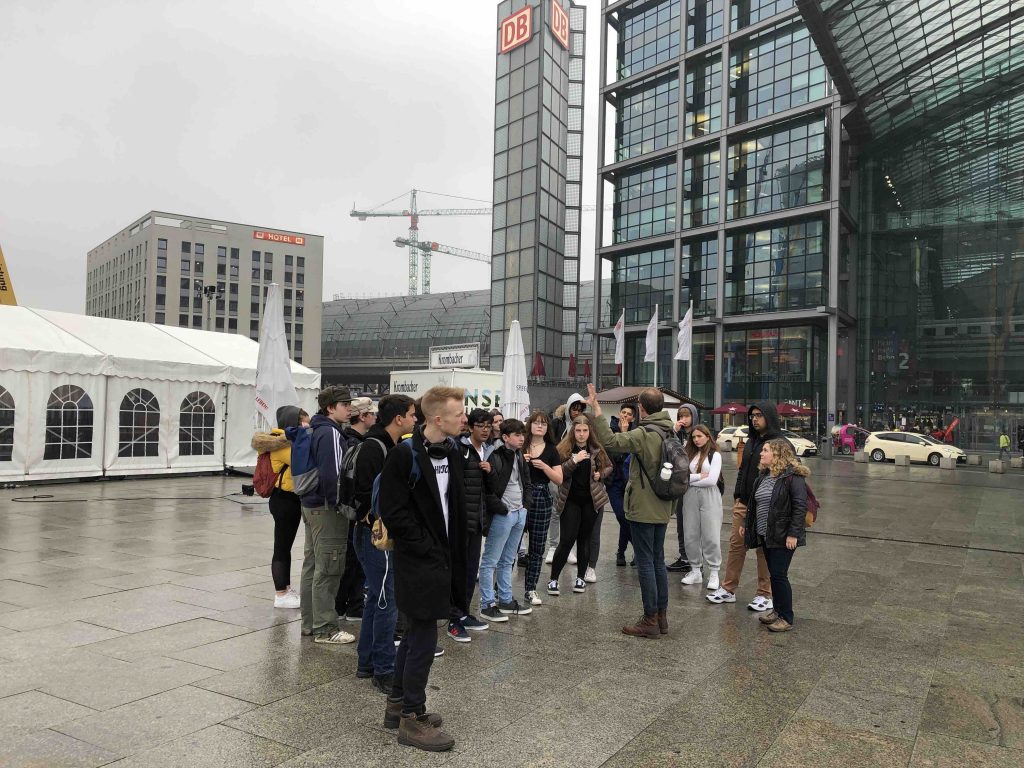 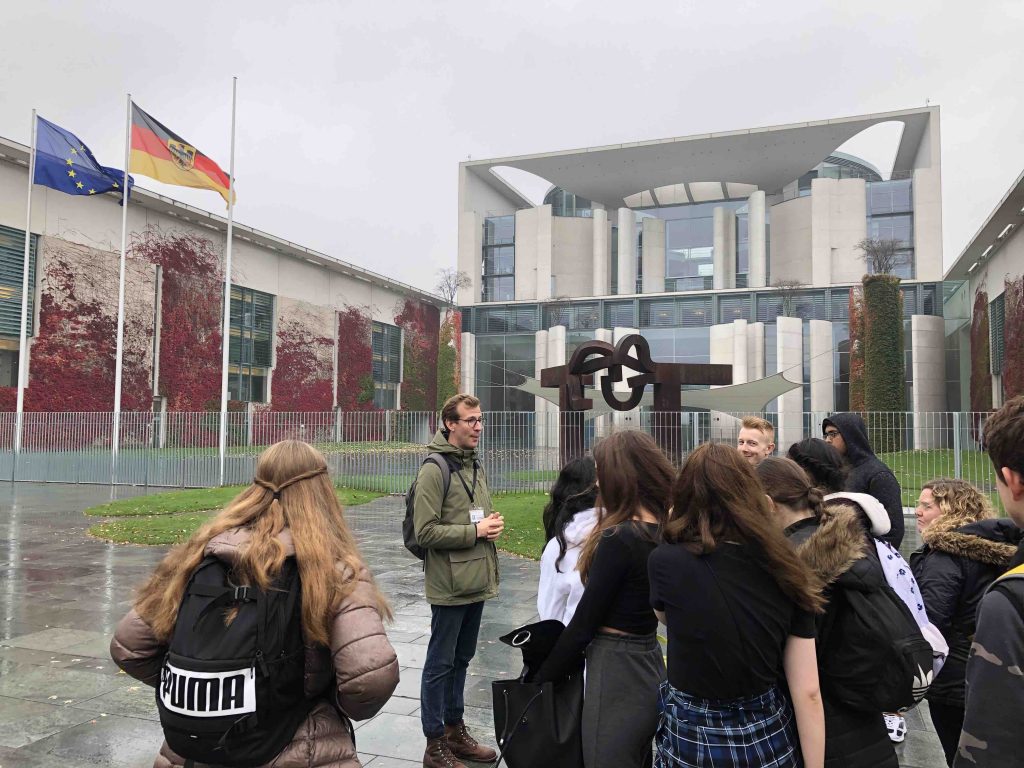 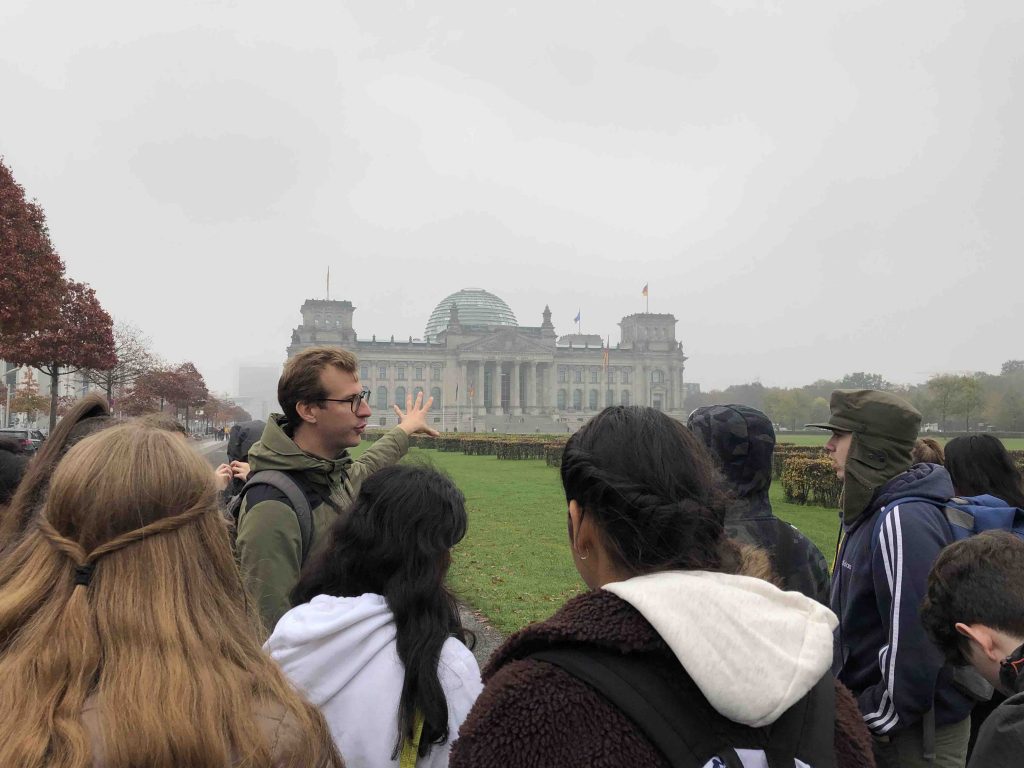 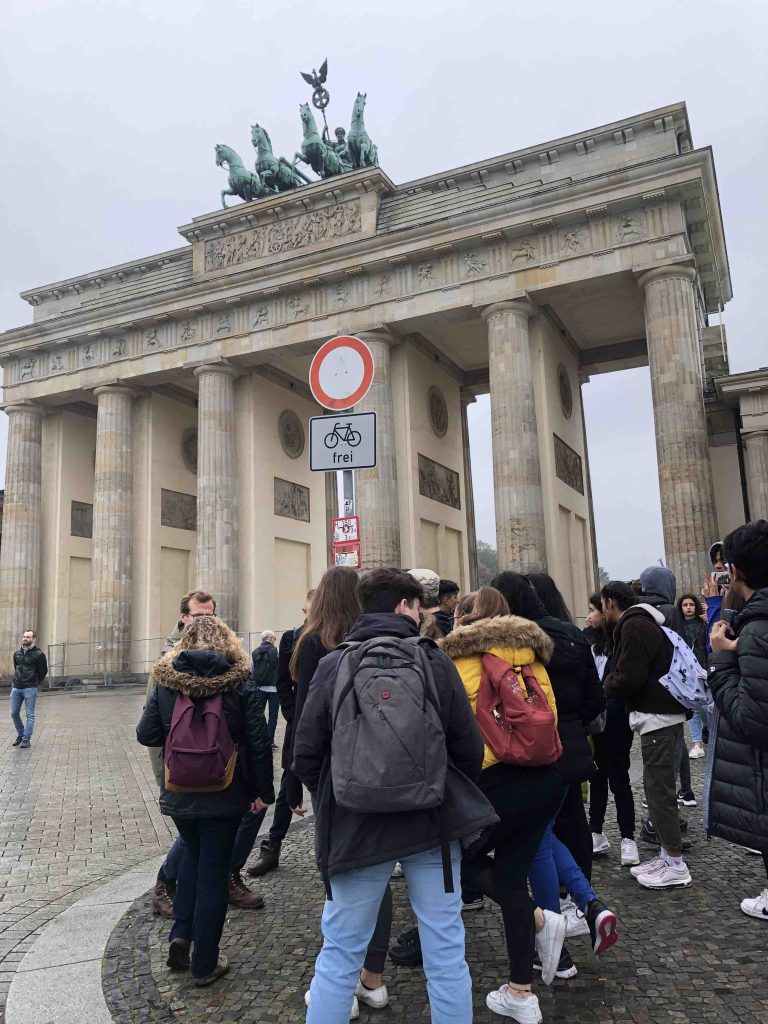 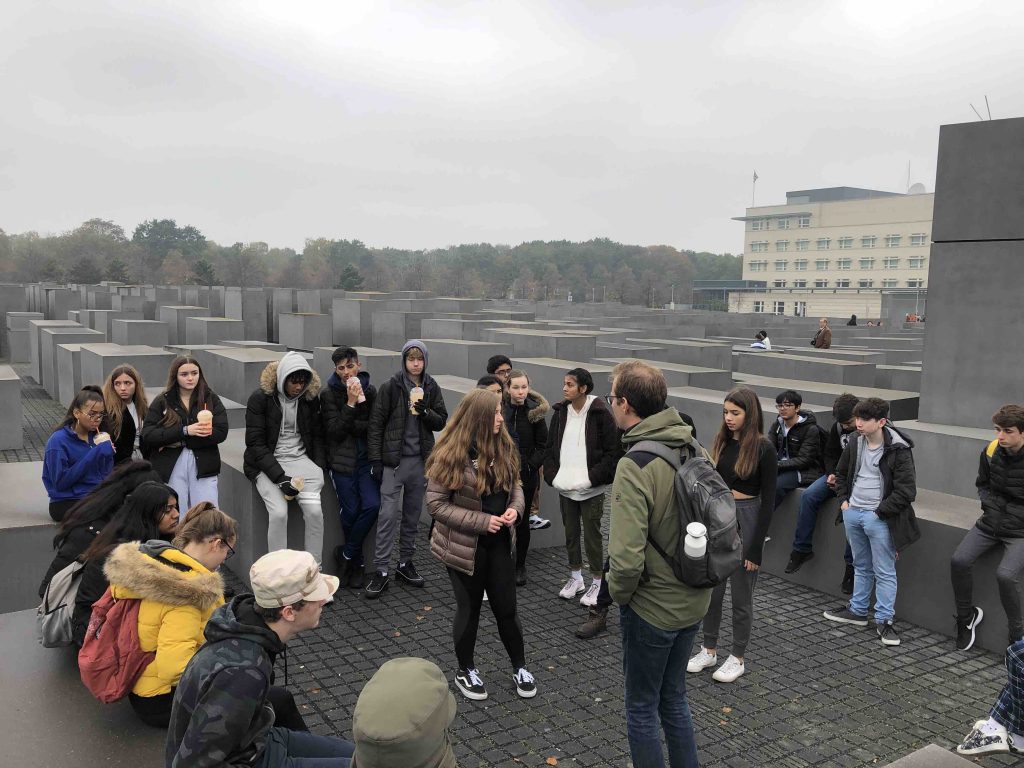 After this, we went to the German Resistance Memorial Centre to learn about the actions of the brave individuals and groups who fought against and disagreed with what the Nazis were doing. To finish the day, we visited the Berlin TV Tower, which gave us some great views across the beautiful city of Berlin. 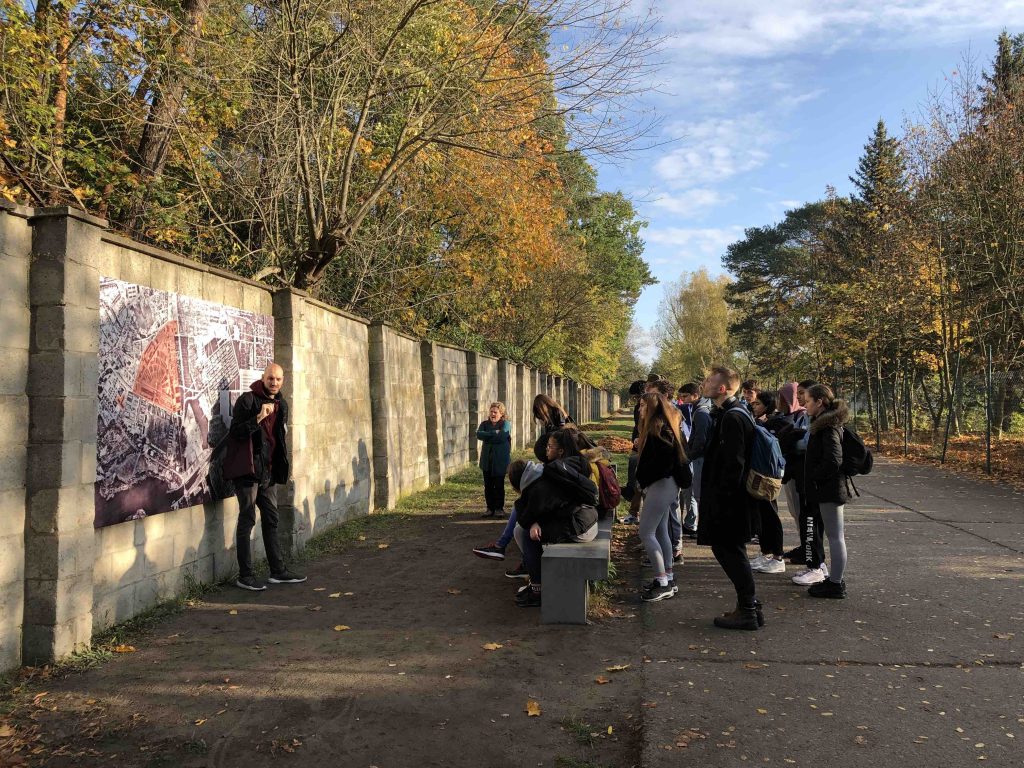 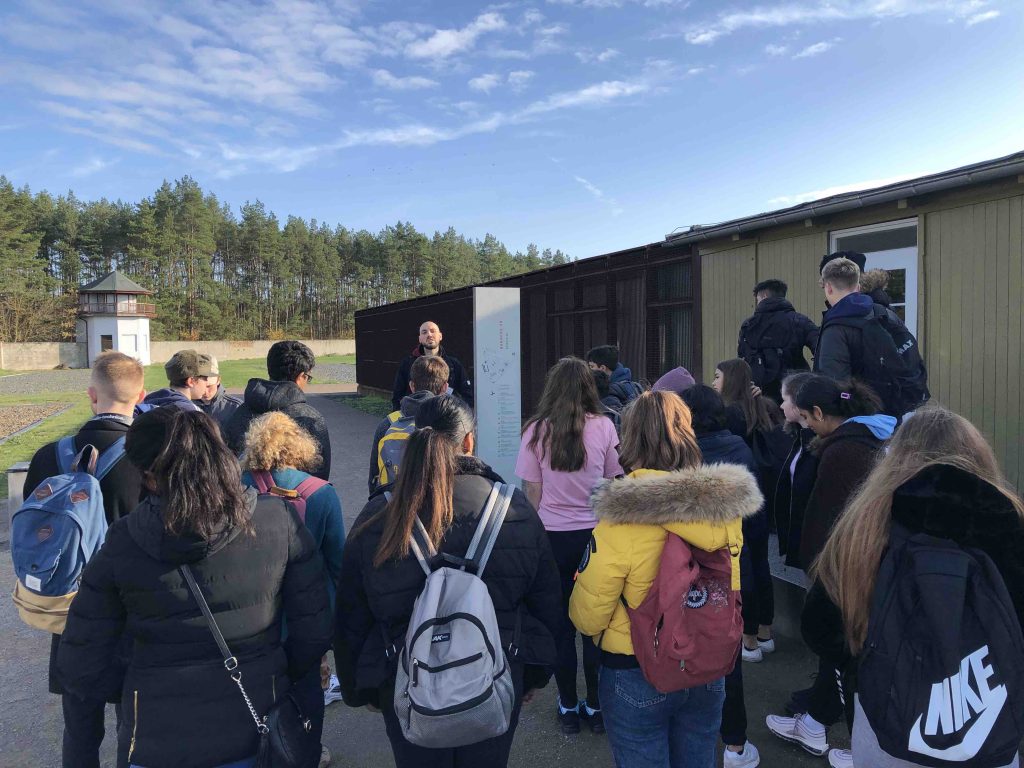 On the third day in Berlin, we travelled to the Sachsenhausen concentration camp, a camp where many Jews were sent to work. Whilst we were there we saw some reconstructed barracks, and saw that up to 400 prisoners would be housed into 1 small bunk! It was difficult to see the conditions many people suffered in, but it was enlightening as to just how disgusting the Nazi’s actions were. 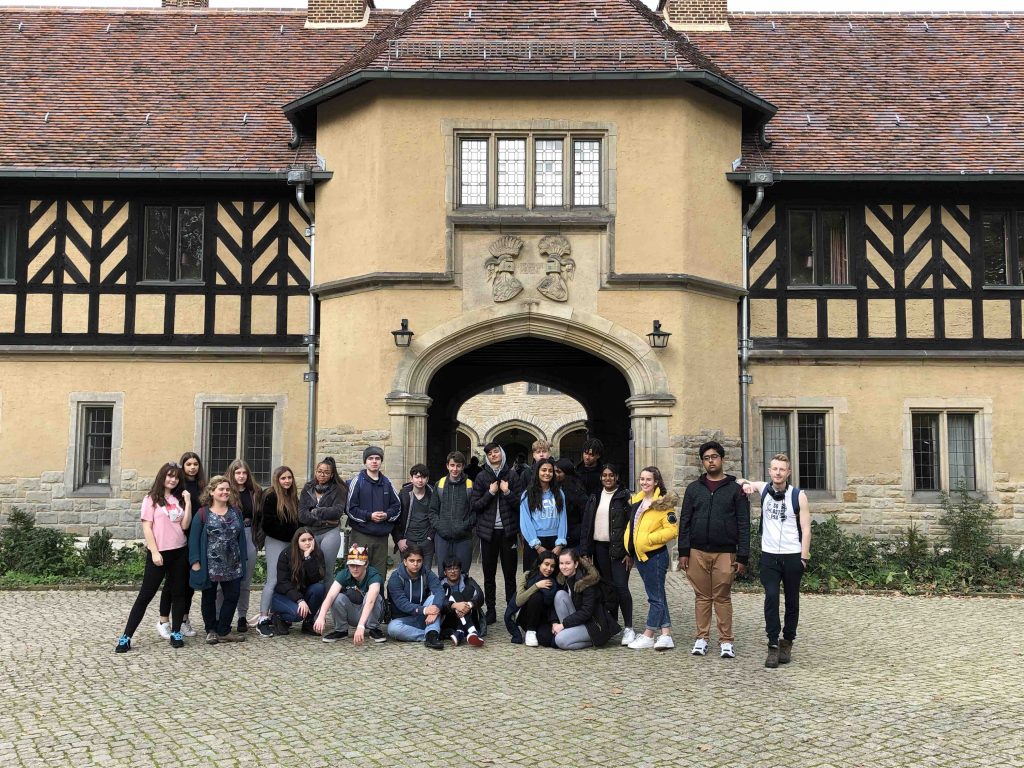 Linking into our next activity, we visited Grunewald railway station, a place where Jews would be transported from one concentration camp to another. On each side of the track, there is a date, a number and the name of a concentration/death camp. This is to commemorate every individual who was transported via the railway. After this, we walked across the Bridge of Spies, a place where there was a lot of tension between the USA and the USSR. To finish off the day, we travelled to the Cecilienhof Palace, which is where the 1945 Potsdam conference took place with Churchill, Stalin and Truman. 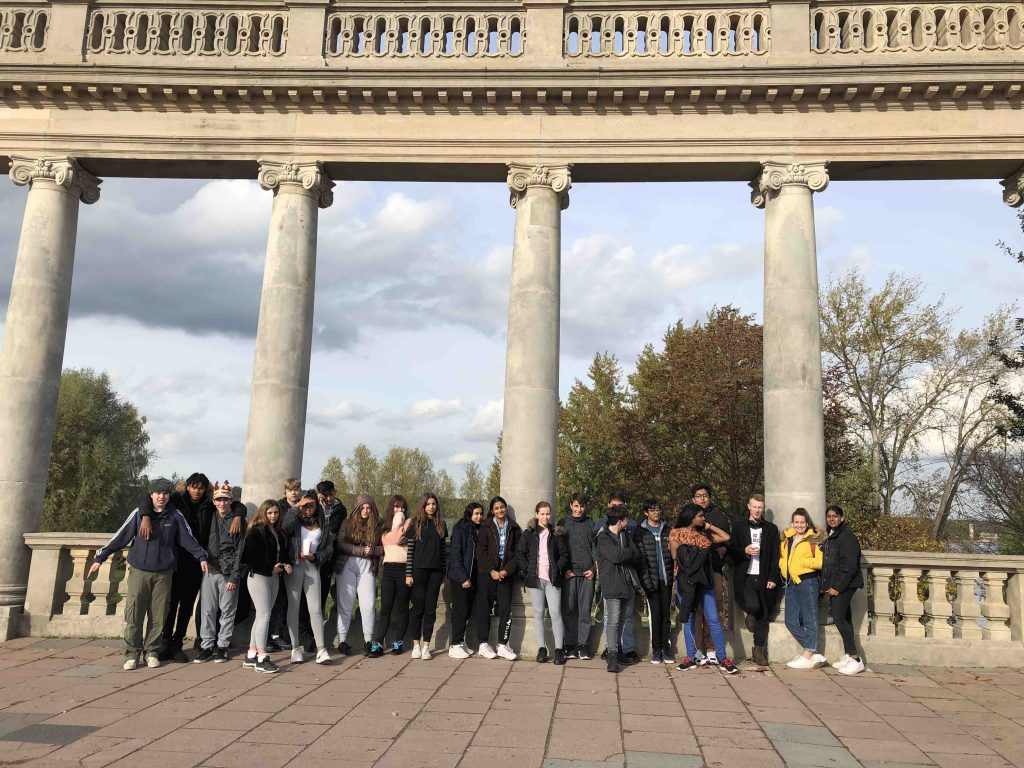 On the fourth, and final, day in Berlin, after storing our luggage, we visited the German DDR Museum. Here, we were able to engage in the life of former East Germany residents and experience the realities of the socialist rule, thanks to the interactive museum. After lunch, we returned to our accommodation to collect our luggage before travelling to the train station for an afternoon train so that we could travel to the city of Poznan in Poland. We arrived at Poznan in the evening, and so met with our representative enjoyed dinner there. 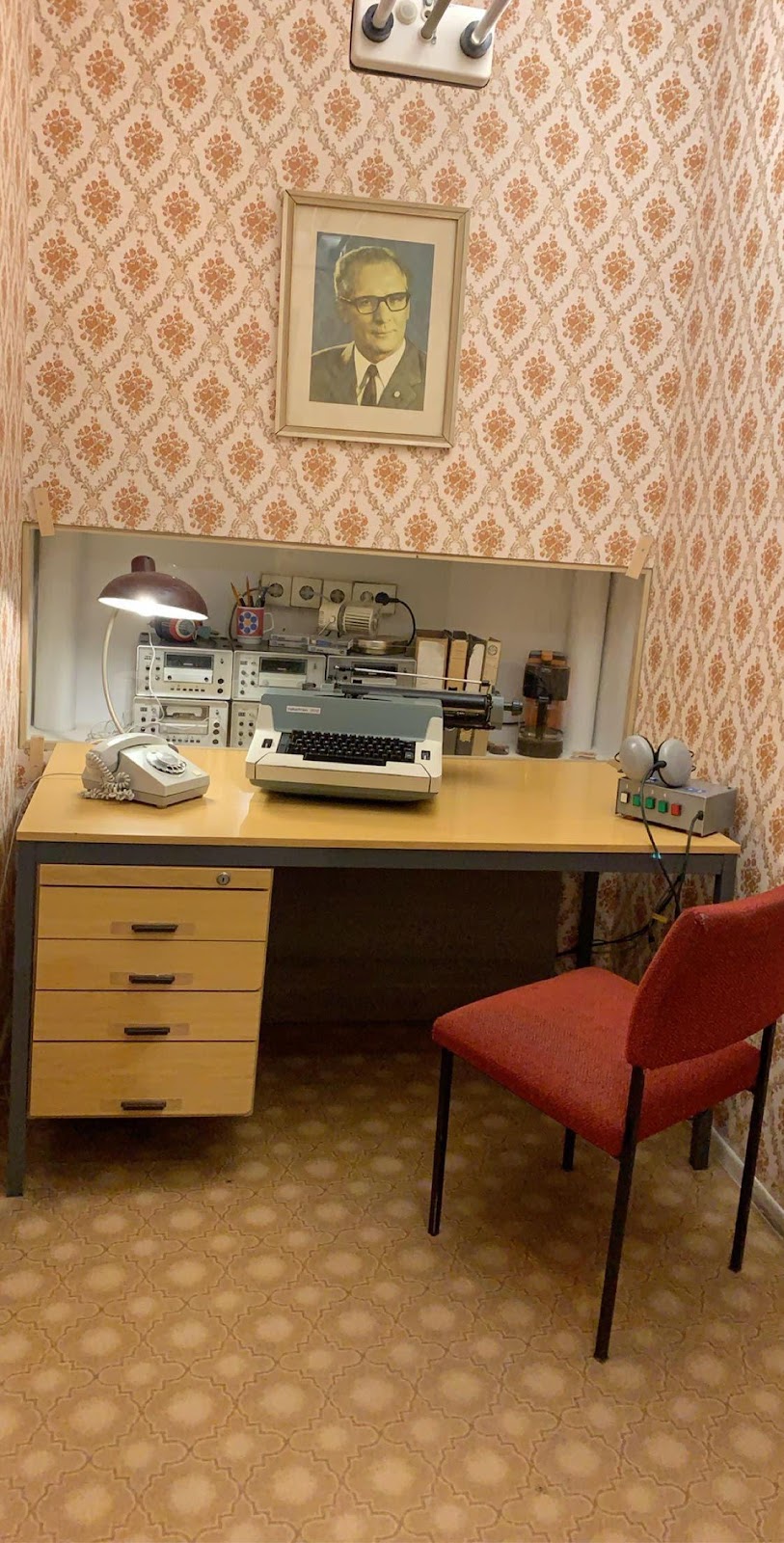 After dinner, we went back to the train station for the overnight train to Krakow.

We first arrived in Krakow early in the morning, at 05:30am, and met our representative. We then travelled to our accommodation and had breakfast. 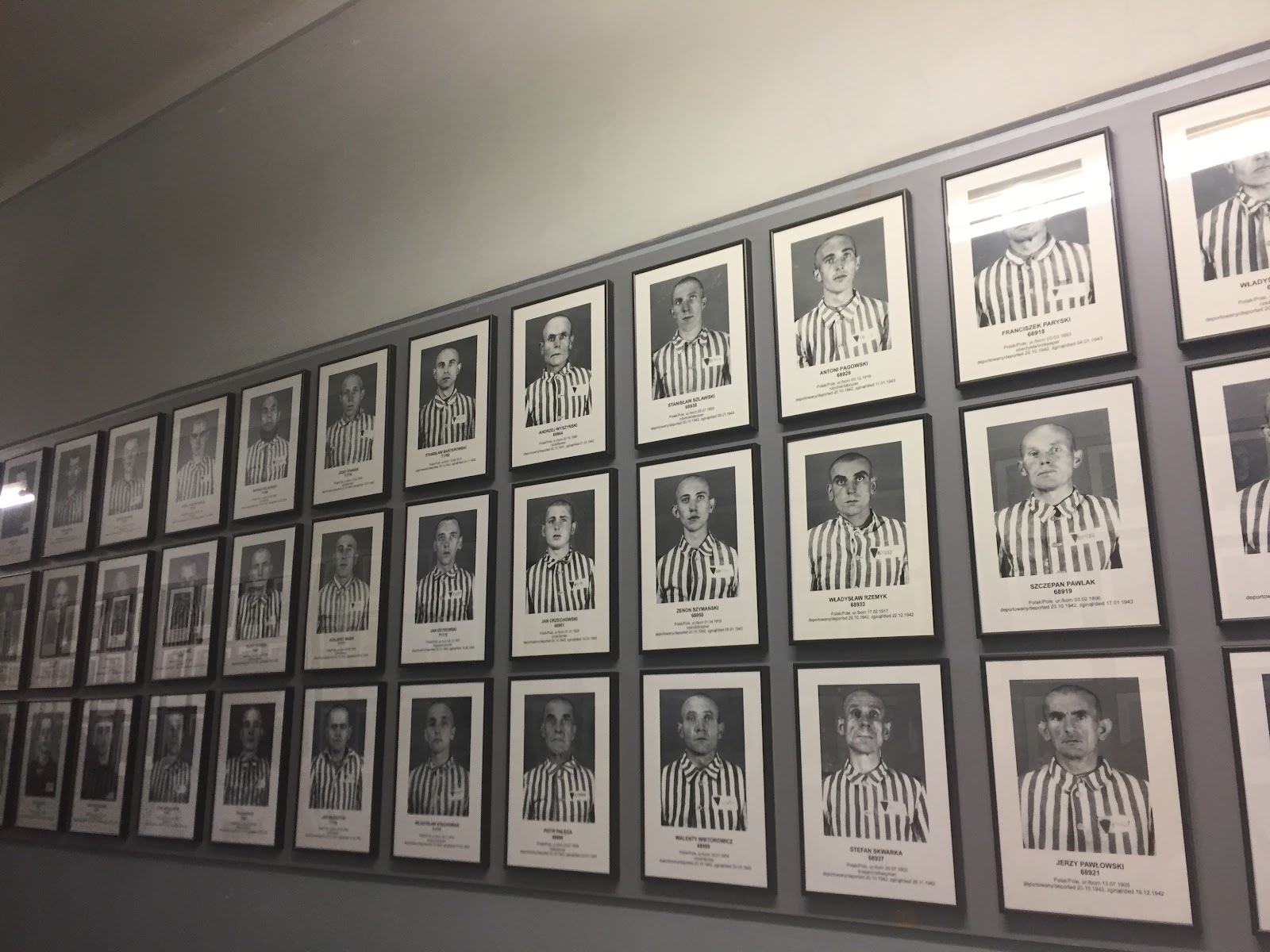 After breakfast, we travelled to the infamous concentration camp, Auschwitz-Birkenau. During World War II it was the largest concentration camp, and so was a devasting eye opener which showed us the horrors of Nazi Germany. After its liberation in 1945, Auschwitz was turned into a museum, honoring the victims of the Nazis. We had a guided tour, and witnessed the horrific sites of the camp. For example, we saw the gas chambers where many Jews lost their lives. It was a solemn experience. 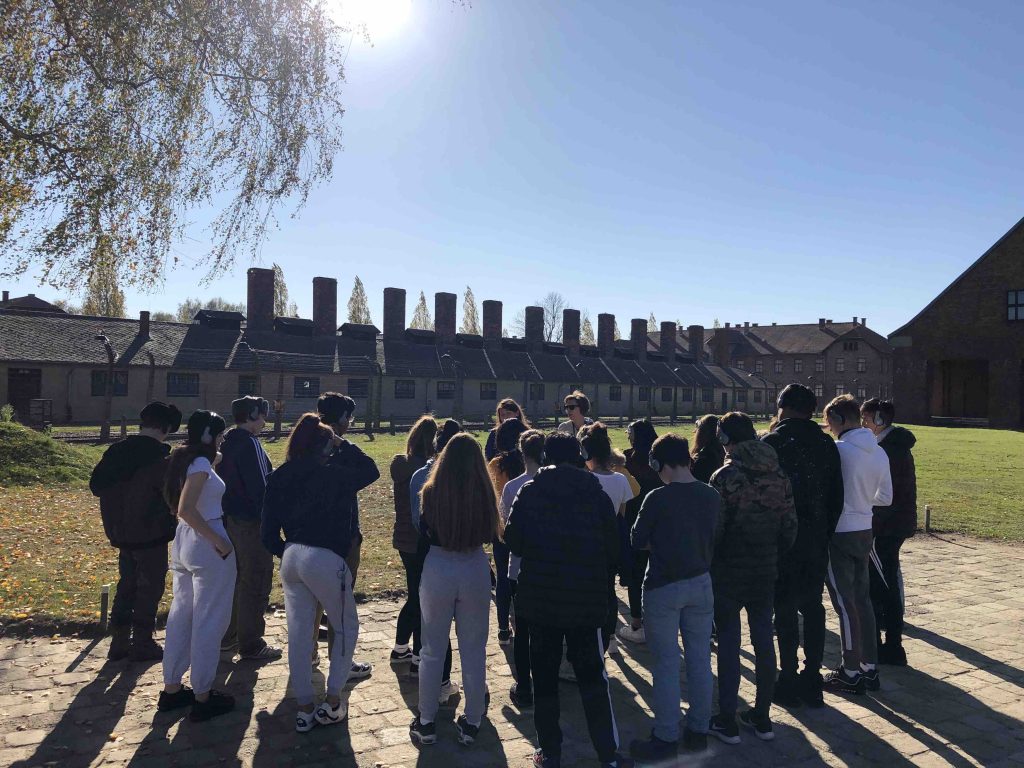 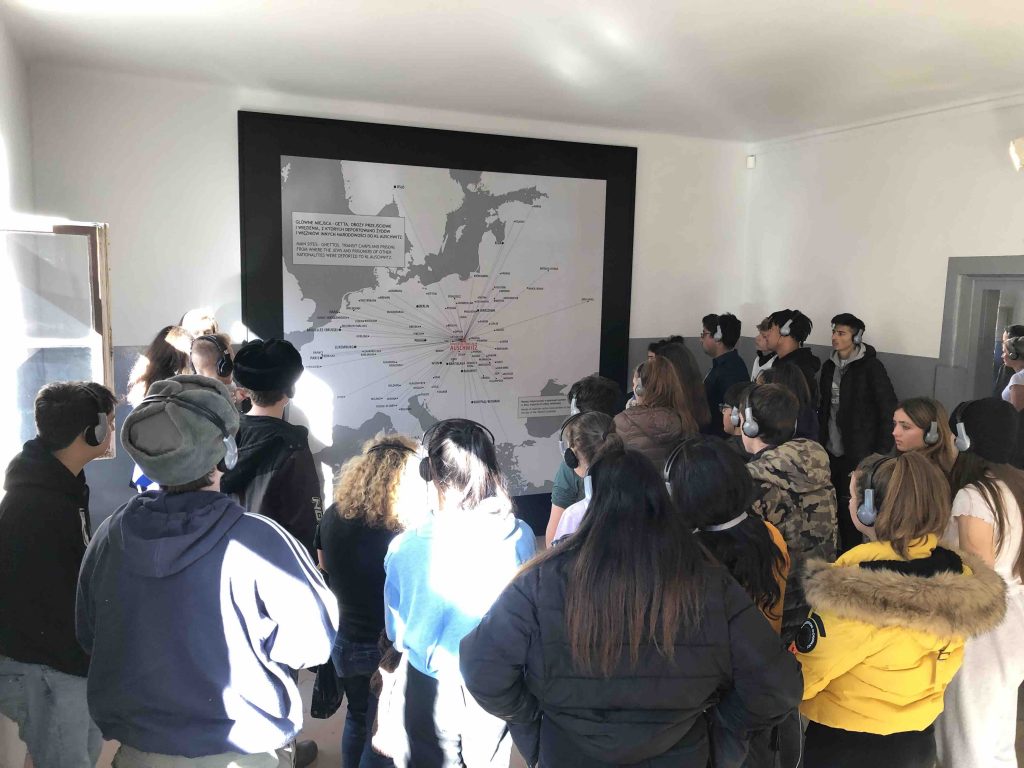 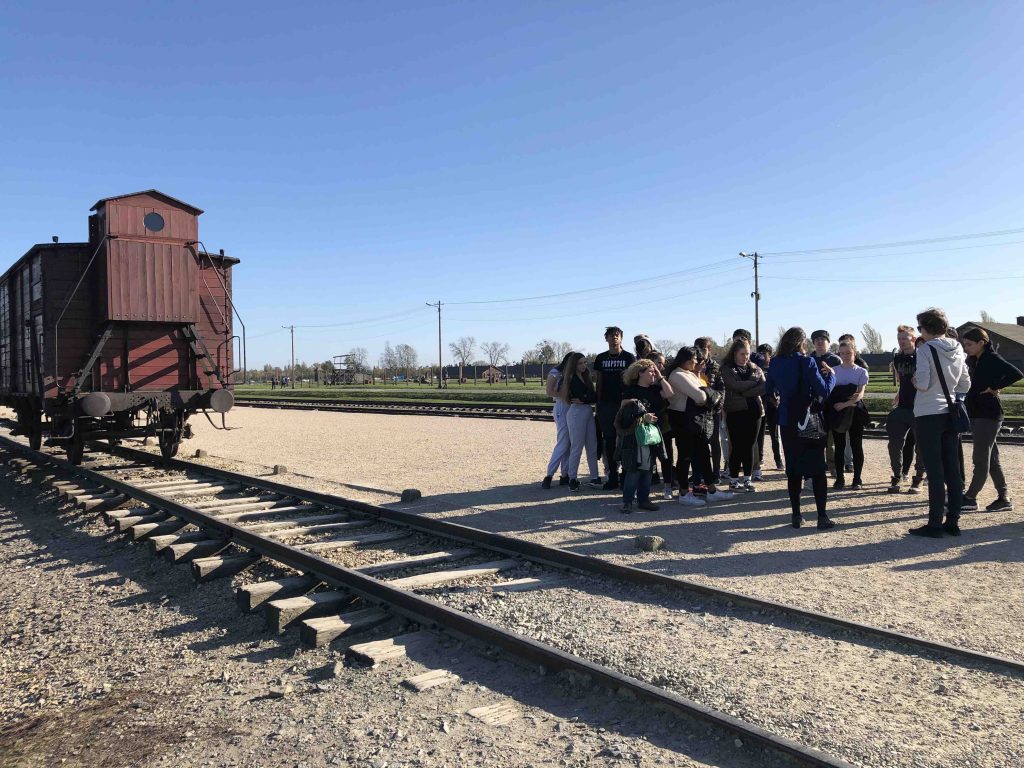 After Auschwitz, we received a guided walking tour of the Jewish Quarter of Kazimierz District. We learnt about the tragic events of the past and visited the Old Synagogue, which was formerly the heart of Krakow’s rich Jewish culture. From there, we went to the main market square in Krakow, where we had free time and were able to witness traditional Polish ways. After dinner, we headed back to our accommodation. 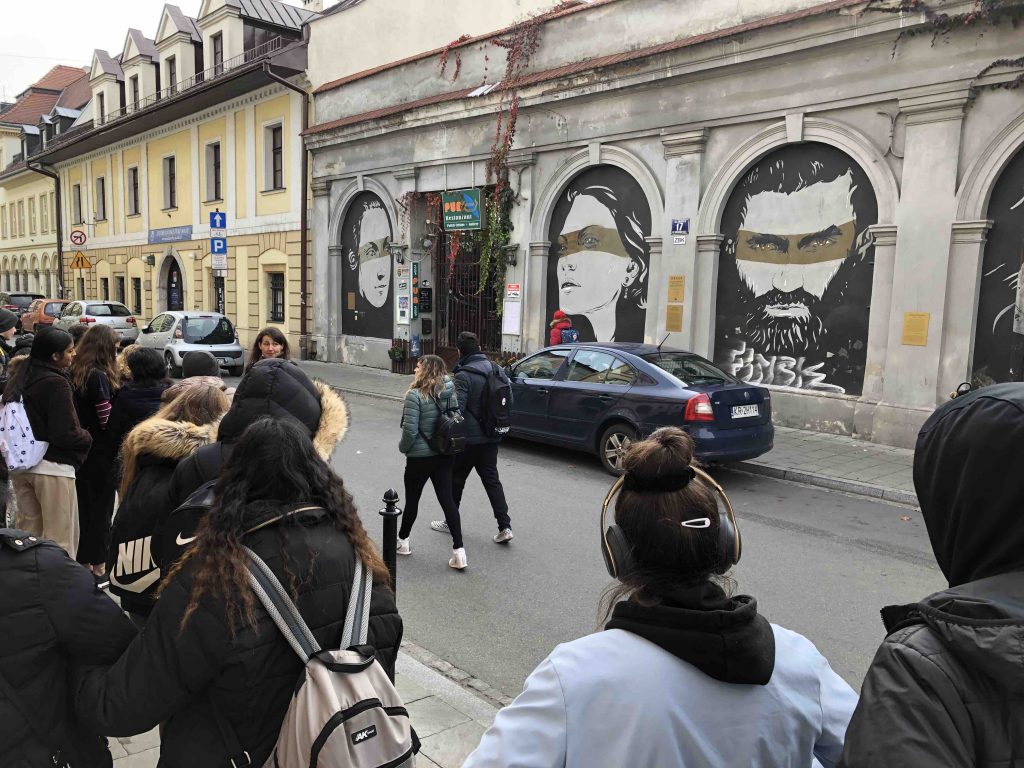 On the second day in Krakow, we visited the famous Wieliczka Salt Mine where we received a guided tour. The Wieliczka salt deposit has been formed for thousands of years as a result of many processes. It has a diverse, unique geological structure. 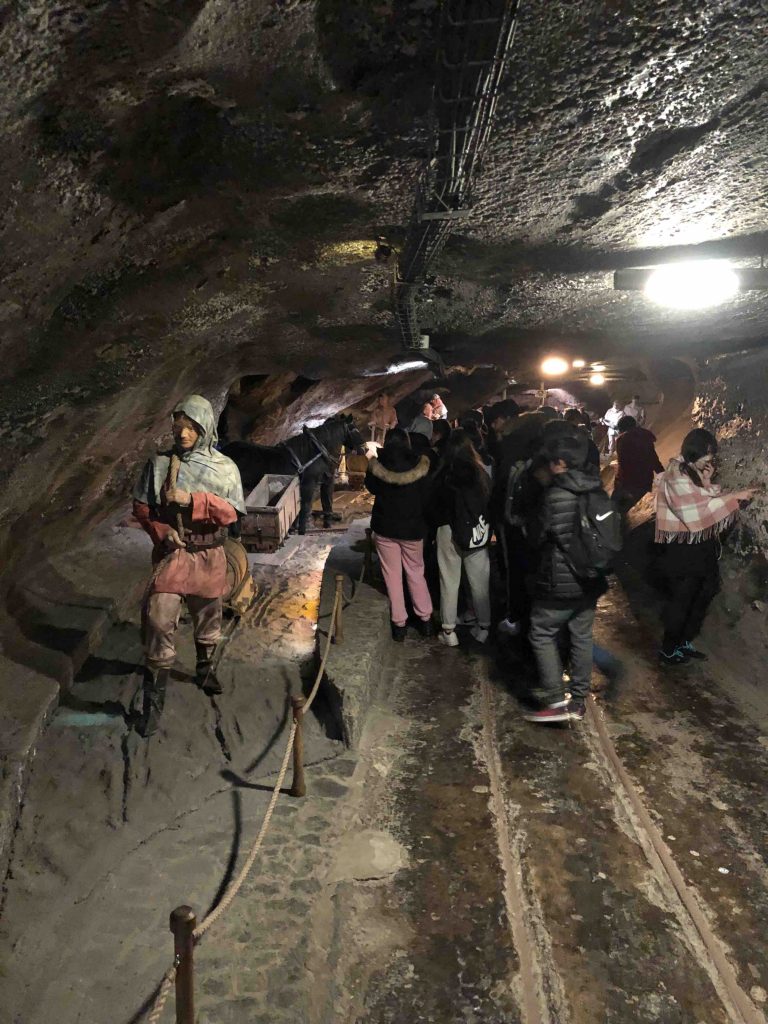 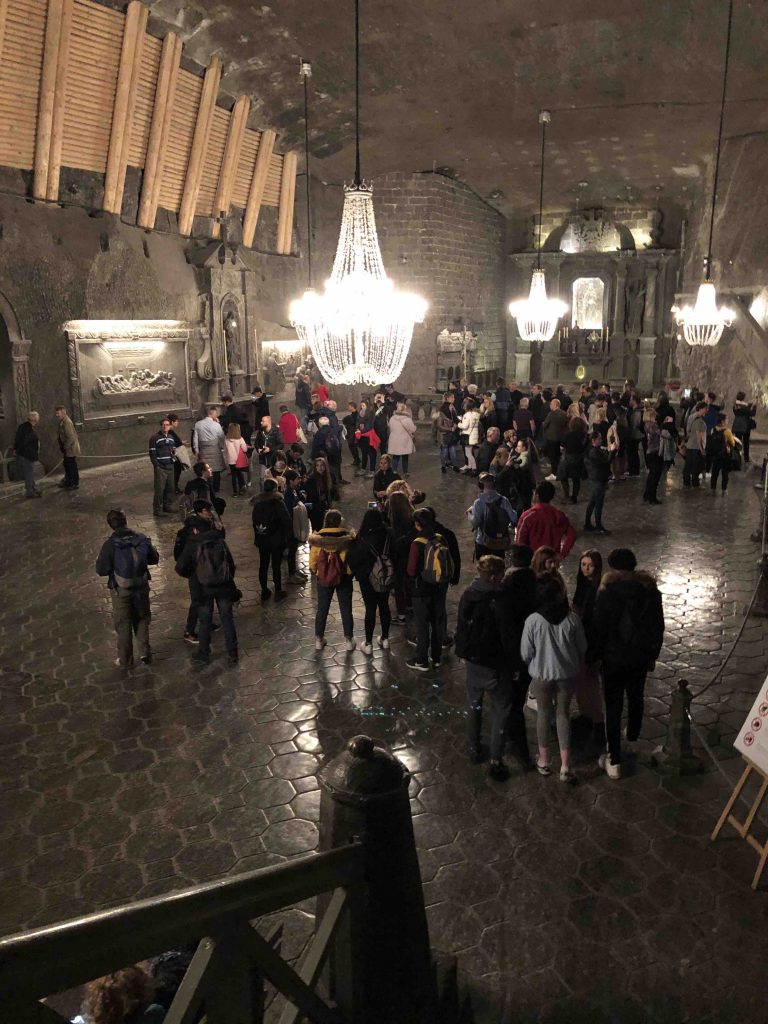 It is located 135 meters underground, and the mines date back to the twelfth century. The mines played an important role in the economical development of the city. This is the only salt mine in the world which is preserved in such a pristine condition. Here, we saw elaborate salt decorations and were able to taste the walls (which tasted of salt!).

We headed back to the city and had a walking tour of Krakow city, where we visited the Old Quarter. It was the former capital of Poland, and its rich history is visible today. On this walking tour, we also visited Wawel Castle and Cathedral, which were both beautiful. Polish monarchs were buried in vaulted crypts.

After dinner (and a show), we went bowling. 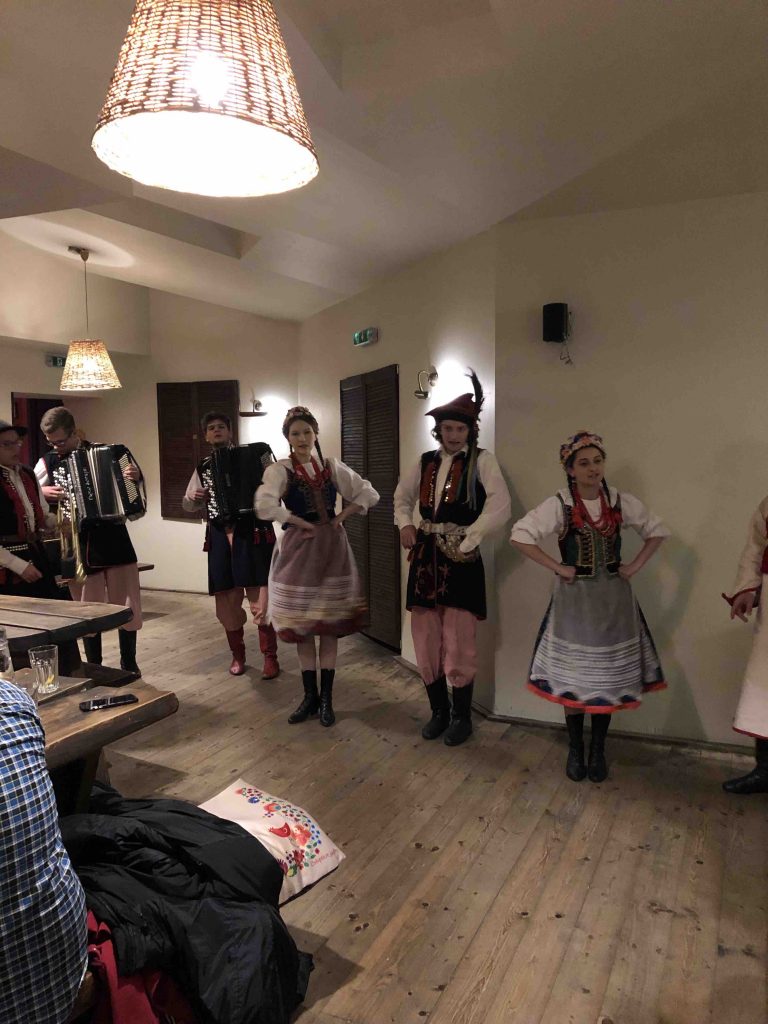 On our third, and final, day in Poland we went to the Galicia Museum which commemorates Jewish victims of the holocaust as well as celebrating Jewish culture and the history of the former Austro-Hungarian region of Galicia. Here, we met a holocaust survivor who dedicated her time and was amazingly sweet and listened to her heartbreaking testimony first hand; her story of how she finally met her father years after fleeing her hometown with her mother. 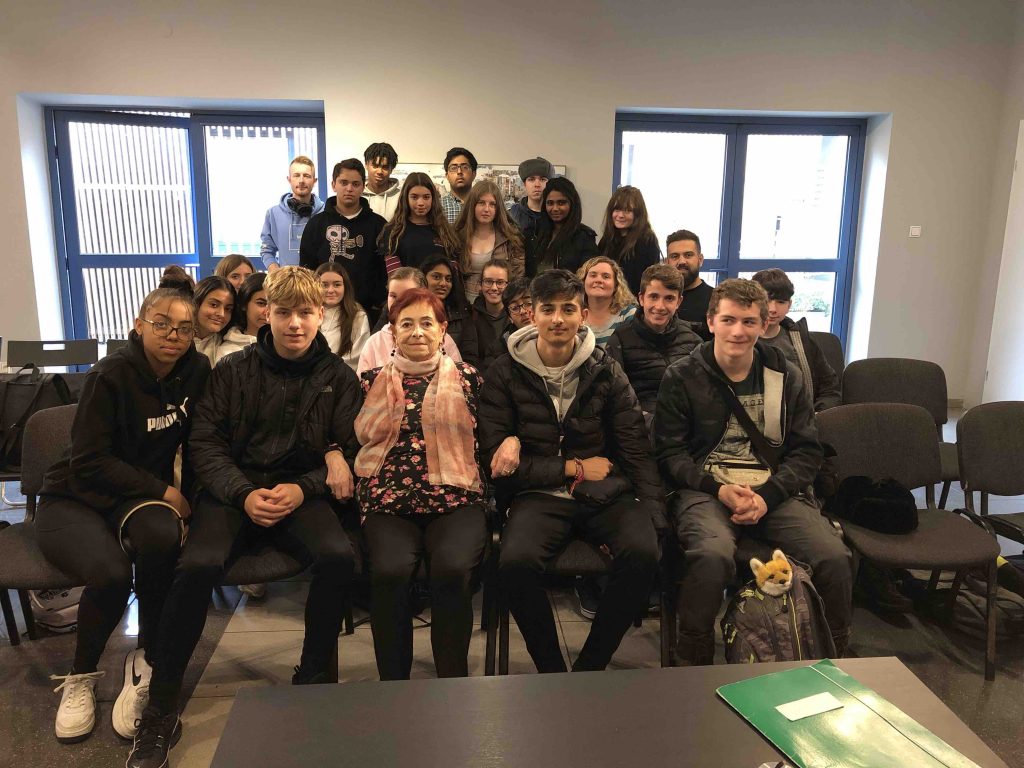 After this, we visited the factory of Oskar Schindler. Oskar Schindler was a man who saved thousands of Jewish workers and was commemorated in the movie: Schindler’s list. 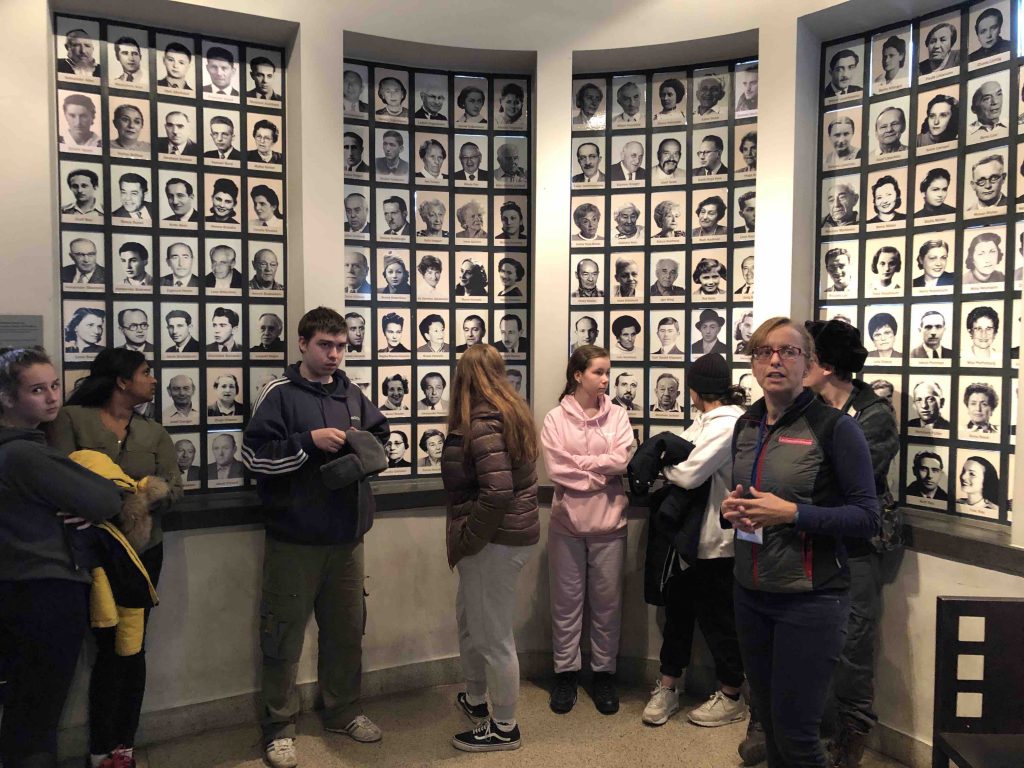 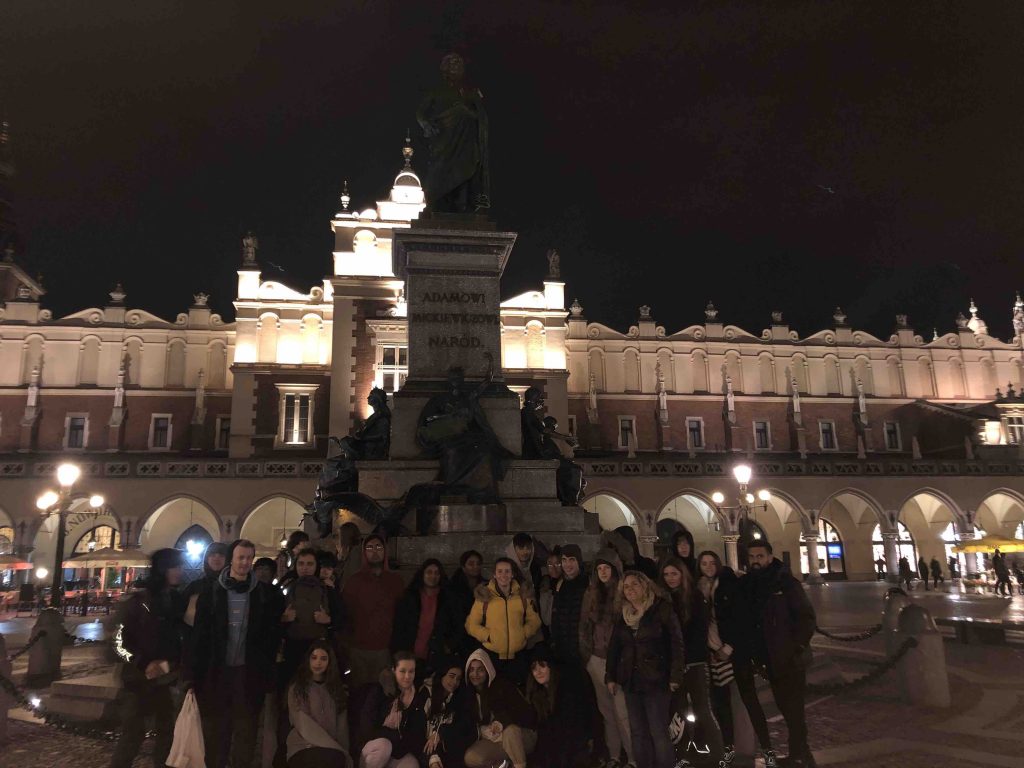 From here we began our journey back home to England.

Overall, we thoroughly enjoyed our time on the trip and we speak on behalf of the rest of the group.

Act of Kindness in the Community

The whole school mantra, Our School has a Mind to be Kind, is discussed frequently with students and the wider community with everyone encouraged to participate in Acts of...

​Last Friday some of us went on a trip to help us improve our French speaking and writing skills and this included watching films in between. We watched 4 short films and did...