Back to Latest Articles
Student Leadership

This week, we (Rikhil and Victoria), along with the rest of the student leadership team, we were given the opportunity to lead a whole school assembly on the theme of...

Thursday saw the launch of a new Reading Mentors programme at Bushey Meads.  I had the pleasure of running a breakfast training meeting for 25 mentors from years 10 and 12. They...

Rob Tester was keen to come to Bushey Meads in order to find out more about our Student Leadership Teams.  He had a tour of the school; met with Mr Turner and myself and had a...

It was really encouraging to see so many Year 11 students attending the focussed science revision sessions held after school each Thursday.Over 70 students were working hard...

Advanced Lead Teacher Miss Lindau led a really concise and useful Monday Magic Moment at the start of the week, sharing some smart advice for marking and providing useful feedback...

This week, we (Rikhil and Victoria), along with the rest of the student leadership team, we were given the opportunity to lead a whole school assembly on the theme of “Leadership”. For this, we each took a slightly different approach and looked at different aspects of leadership, as we aimed to uncover exactly what leadership meant to each of us and how the qualities shown by being a leader could be implemented by students within and outside of school. 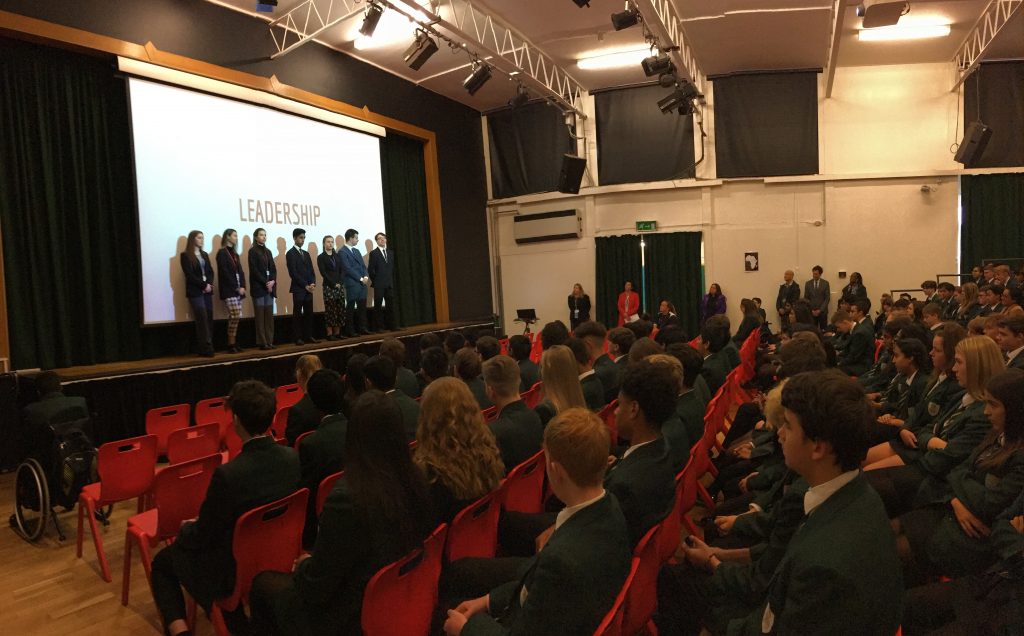 To begin the assembly, Marie (Deputy Head Girl) looked at the question of “What is leadership?”. Reflecting on the key value of a leader’s ability and drive, she communicated the ideas of leaders within the life of an individual as well as respected figures. She highlighted the importance of understanding the idea of leadership past the common stereotype and focus on public figures- and instead touched upon what a leader is to you. 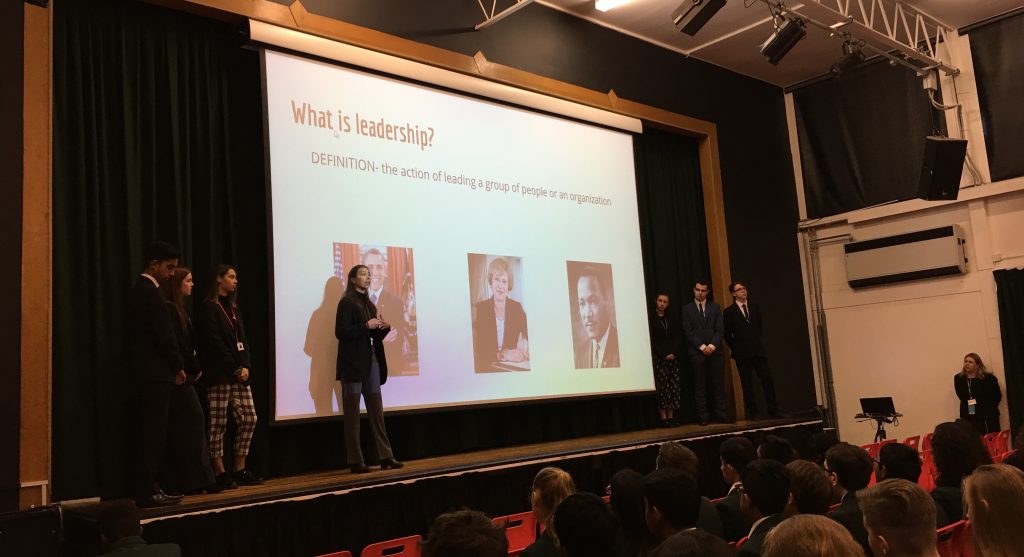 Leon (Head Prefect) spoke about how students can show leadership in their day-to-day lives through service to others. He explained how, contrary to many people’s perceptions, it is not charisma and widespread influence that make the best leaders, it is a sense of duty and selflessness. Leon also briefed the assembly on the work of our team of prefects in sixth form, who have this week begun their ‘lunchtime duty service’ to help open up links between sixth formers and other students. 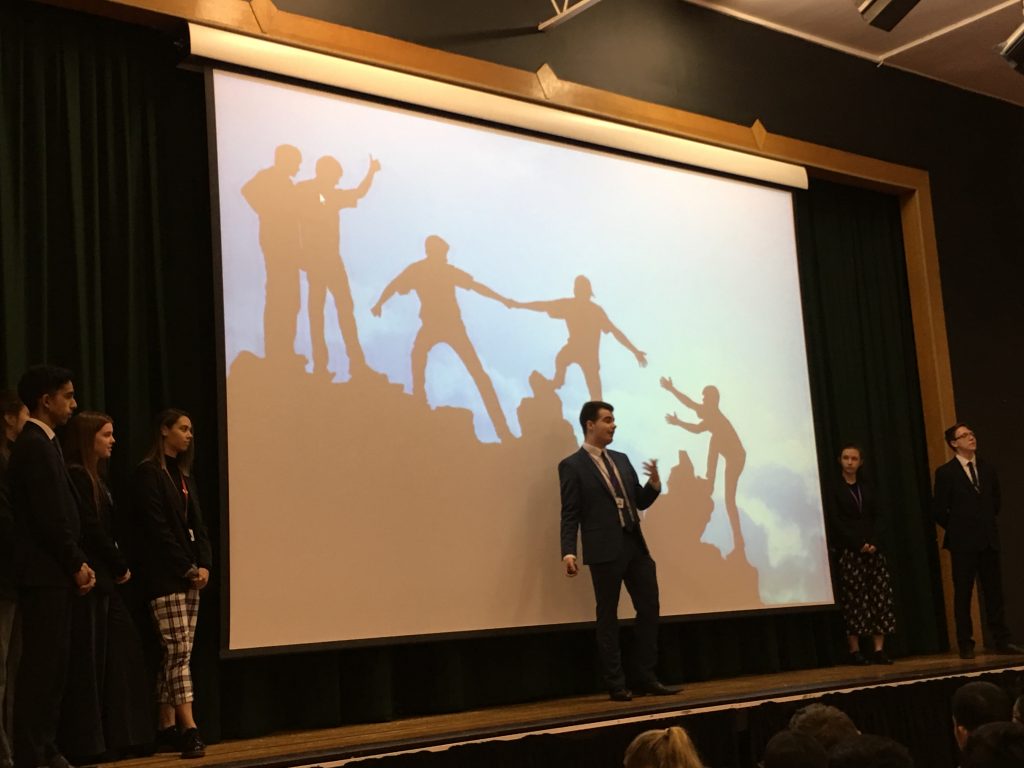 Eleanor (Deputy Head Girl) spoke about what it takes for pupils of Bushey Meads School to lead their peers. In this section of the assembly, she iterated what it meant to her to be a leader in four short points. For Eleanor, being a role model to her peers is one of the most important parts of being a leader, as she believes it should be a desire to want your peers to achieve their potentials, as well as oneself. She linked this to showing interest when working in a team, much as the Student Senior Leadership Team have to, and last weeks theme of the week, Communication. Lastly, she touched upon being brave. She relayed that by being bold and brave, students are being their best possible versions of themselves, a quality that every leader has- as everybody has the ability to be a leader, they just have to believe in themselves. 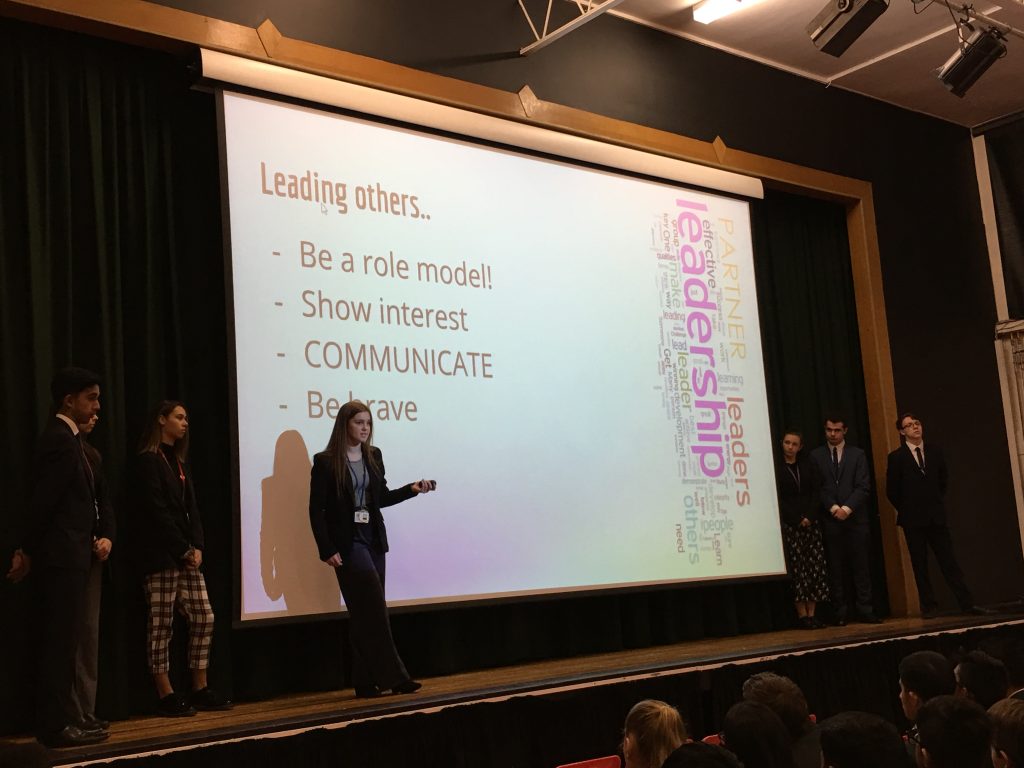 In the senior leadership presentation, the idea of “Who can be a leader”was taken on by our T-ala (Deputy Head Girl). T-ala told the students in the assembly that she believed anyone can be a leader in their own life and they were already, they just needed to recognize that and take their opinions further. During her presentation T-ala touched upon the idea of stereotypes around leadership; how it’s false as no one needs to fit into a certain mold to take in on. T-ala mentioned that she herself wasn’t the typical “set 1” student however she is now a member of our Senior Leadership Team, proving you should take leadership of your own life and not let a stereotype define you. 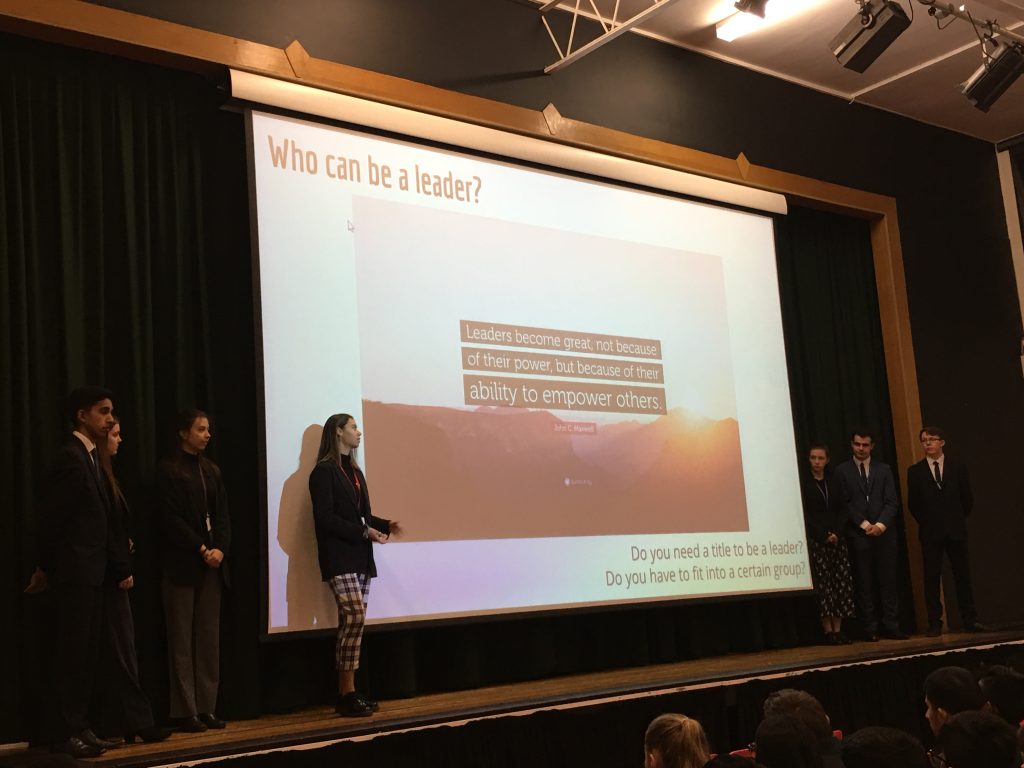 After Marie, I (Rikhil, Head Boy) spoke about leadership within school hours and outside of school hours. For example, being a leader within school hours would be making sure other students and their peers weren’t behaving in a way that was in line with our school’s mantra of having a Mind to be Kind i.e littering or treating someone in a way that they themselves wouldn’t wanted to be treated. Being a leader outside of school hours would be for example letting the public on the bus first, making sure other students aren’t portraying the school in a negative light or playing around dangerous roads. From here I spoke about one of my favourite quotes: “Leadership is not a position or title, it is action and example”. What I meant by this is that for the students that have taken up responsibilities and roles. it isn’t the badge or title they have been given that will make them a leader, but what they choose to do with it that will determine whether they are a leader or not. This also applies to the students who do not have a responsibility because even though they don’t have a specific role, it doesn’t mean they can’t be a leader because we as a school all have to lead each other as a team and a collective to our paths to success and achievement. 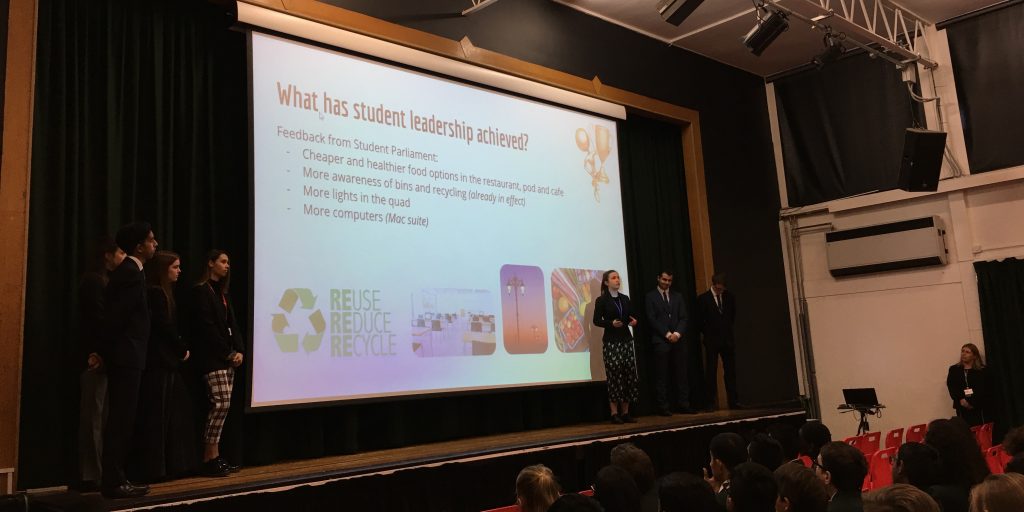 Within my own slide, I (Victoria, Head Girl) was able to discuss how leadership impacted our school and identify some achievements of last year’s leadership team: cheaper and healthier food options in the restaurant; more computers with the new mac suite; more awareness of bins and recycling and lights in the quad. With this in mind, I discussed the student parliament meeting that had taken place on Tuesday. It was great to show the people who had attended and others within their forms that student voice is able to achieve and implement positive changes across the school. Hopefully, this would inspire some students to want to take part in leadership as they would realise that it’s achievements would have an impact on their day-to-day lives.

At Bushey Meads School we hold many events and meetings where we rely on students to help us ensure they run smoothly, and I am lucky enough to have a group of students called the...