A vegan way of living?

The Year 9 and Year 10 Food groups had the pleasure of a visit from an education speaker, Lynne Snowden from Animal Aid last week to help consolidate the topic of Vegetarian and...

Year 10 Economics students took part in a De Bonos Thinking Hats Challenge/Role Play in lesson this week. They had to work as a team, each take a specific role, identify possible...

Thank you to everyone who attended the More Able Today Than Yesterday evening last week.  Both sessions were packed to the rafters, contributing to a warm and vibrant atmosphere...

Ending on a High!

Our concluding Friday Faculty Focus at the end of this year’s first very successful Marking and Feedback Fortnight of the academic year shared some superb best practice from the...

All teachers across the Bushey St James Trust met at Hartsbourne on Wednesday 20th November for the first Teacher Toolkit session, the theme of which was well-being. Although only...

Student of the Week – Issue 62

Key Stage 3 Polly 7 Elm – Polly has made an excellent start to her Bushey Meads journey.  She is a conscientious and hard working student who always does her best in...

It has been another really busy couple of weeks of sports with competitive fixtures in football, rugby and netball as well as the Inter House netball competitions and new clubs starting. We are still having issues with some students/parents not knowing what clubs are going on. A reminder the weekly PE extra-curricular programme can be found on the display boards in the PE area lobby, on the BMS website in the calendar link of the Menu and on the school desktop. Students can also find out by asking all PE staff. This week has seen a change in after school clubs with basketball and rugby starting and these will continue throughout the remainder of the term.

On Tuesday 26th November we were lucky enough to be involved in a joint mock moderation (mockeration) for our year 11 GCSE PE students with Rickmansworth school.

Taking place as part of the year 11 mock exam fortnight this experience was part of the students examination process and was a good indicator of how the moderation day is organised.

Students participated in either badminton or netball, and they were put through a series of drills and practices so that they could consistently demonstrate the skills required by the OCR exam board.  A number of teachers, across the schools, observed and moderated the performances in order to ensure fairness between each of the students, the two activities and to standardise marking and assessment across the schools.

The students were a real credit to the school, they adopted a very mature attitude to the activities and found it a valuable insight into the process they will go through in May.  We will be organising several other of these ‘mockerations’ to allow the students who are participating in other sports this opportunities.

Comment : Tuesday saw the year 9 boys participate in a rugby development tournament at watford rugby club. The tournament is always an excellent chance for the boys to participate in some competitive rugby before their league matches start. After winning the first game through a combination of team work and some excellent rugby moves. However the team came second in their group having lost to a strong Rickmansworth side. It was a great tournament to start the year and the team have some positive foundations to build upon for the season.

Comment: Tuesday saw the year 8 boys participate in a rugby development tournament at Watford rugby club. The tournament is an excellent opportunity for the team to participate in some competitive rugby before league matches start. Throughout the tournament the team showed some excellent cartector and grew into the competition. By the end they were all playing some very good rugby that they can build upon come the start of the season.

Comment : Despite the team missing several key players the boys put in a really spirited and determined performance on Saturday. The boys worked really hard throughout with some resolute defending and counter attacking football. All the boys were a credit to the year group and can be very proud of their efforts. Special mention to Stan B and Cian L who were outstanding in central defence.

Comment: The boys worked hard and gave a solid performance against a strong Parmiters team. I. Dahmani made several tackles in the midfield & K. Said put in a great performance in goal. Some errors marking from corners led to 3 of the 4 goals conceded. However, there were lots of positives to take away from this improved performance in a tough division.

Comment: We played a physical Parmiters team who moved the ball well and were well organised. This meant that we had to ensure that we were equally as organised defensively. J. Wheeler and K. Larkin were both pivotal in our strong defensive display, screening the back 4 and always looking to play out when in possession. Chances were few and far between until the last few minutes of the game where we scored a late equaliser after utilising A.Sackikaran’s long throw, which was neatly finished by the weaker foot of K.Larkin into the top left corner of the net. The boys showed great character and resilience to bounce back so quickly from going a goal down and are looking forward to their next game- The County Plate.

Comment : Saturday saw the year 7A team play Parmiters who are another premier league side. The game started evenley as there were chances being created at both ends of the pitch. A combination of some good defending and some excellent goalkeeping by J. Roberts kept the scores level. Against the run of play midway through the first half we scored the opening goal through some individual excellence by I. Harry Brown. He shortly doubled the score just before halftime. We then conceded a penalty, which was converted to bring the home side back into the game. A minute before half time Parmiters equalised and the scores were level at the break. Parmiters stepped it up a gear in the second half playing some excellent passing football and had the clinical finishing to match. The score is not a true representation of the game itself and the boys can take away many positives from their own individual performances.

Comment : The Year 10 boys produced their best performance of the season with a fine win in the 1st round of the County Plate competition. With the game being played on a 4g astroturf this gave the boys an opportunity to play to their strengths with an excellent display of passing and moving and counter attacking football. The boys were quickly into their stride and controlled the game from start to finish with some excellent goals sealing a comfortable win.

Comment :On Thursday evening of last week the year 11 netball team played in the district tournament hosted at Parmiters school.  We played some incredibly tough opposition from some high performing teams.  Our girls were SENSATIONAL in every game.  Each team member excelled at different points of each match, demonstrating some of the best netball ever seen played by a team from Bushey Meads School.  In the end we came fourth out of 8 teams, beating St Michaels A and B teams, Parmiters A team and the Royal Masonic B team to get there.  There was no ONE player of the match.  EVERY single player deserves Girl of the Match this week.  A huge congratulations to you all.

Comment :This was a tough game as their opponents were the league champions last year. Their were some impressive defending in the circle by Olivia and Ruby and all girls’s play improved as the game went on. More accurate passing would have enabled us to keep possession of the ball

Well done to all players for their determination and effort.

Comment :The girls worked hard throughout the match to gain possession. There were some strong passing down court and interceptions. Unfortunately St Margarets shooting was very strong and they took an early lead. Thanks to all the girls who played and a special mention must go to Alice and Carmen for helping the senior team out.

This week saw the final matches take places for year 7-10 in our annual house netball competition.

Students compete in PE groups for their house and the points are tallied with those of their house mates from the other PE groups, meaning that all girls represent their houses in the competition. 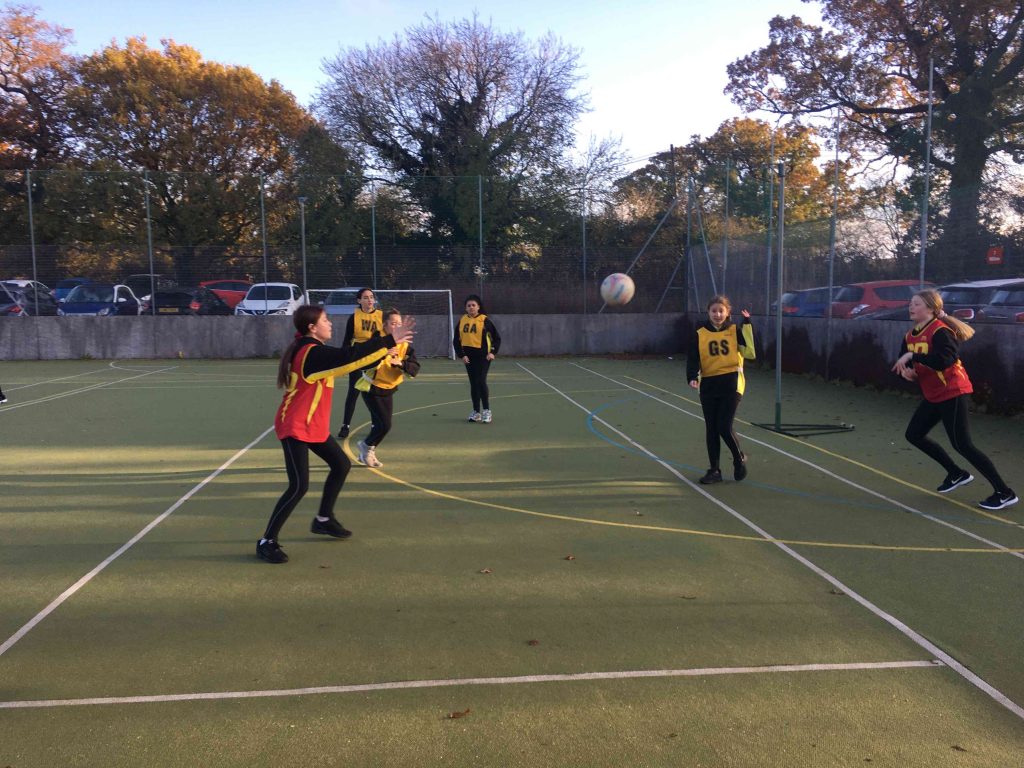 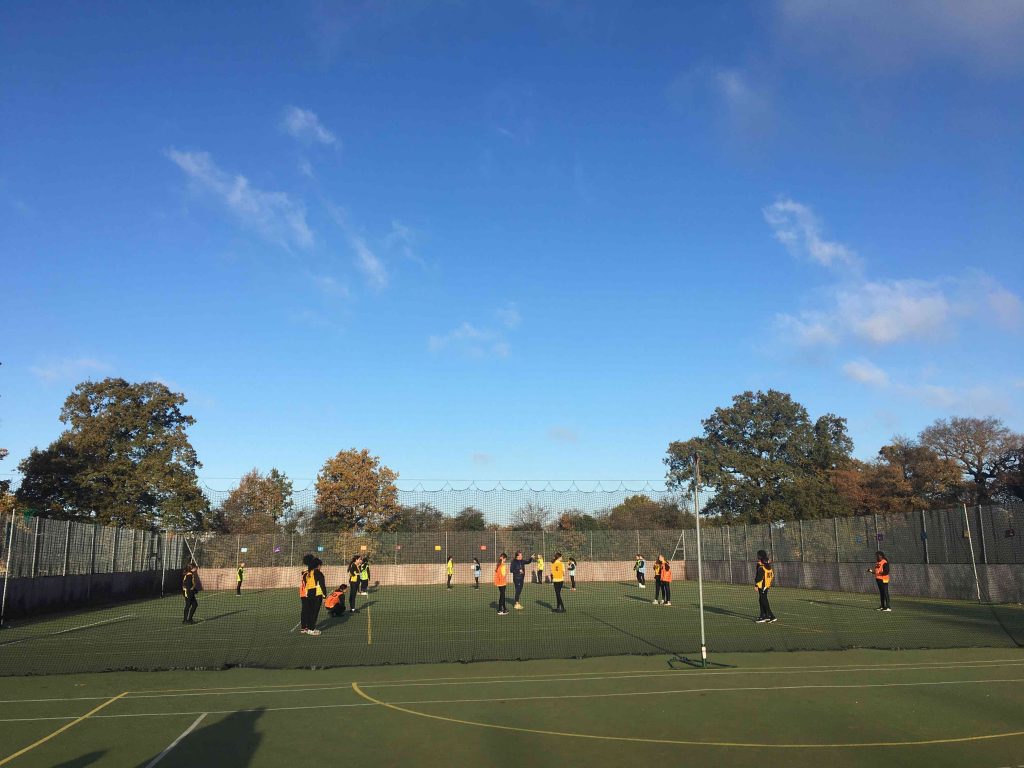 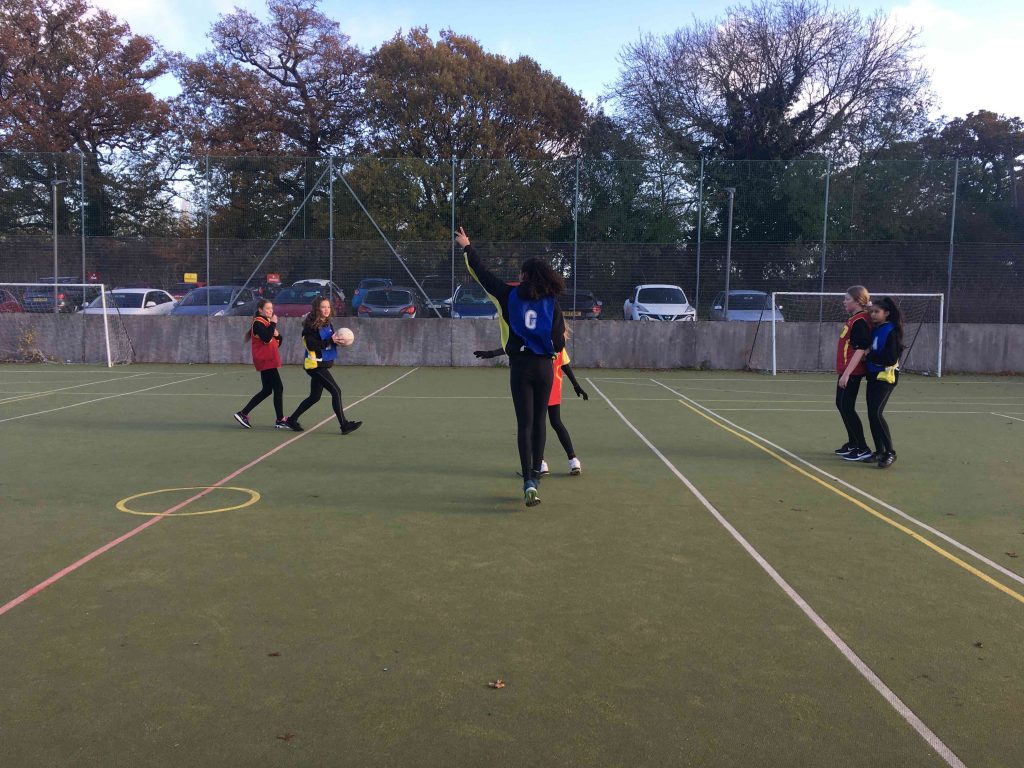 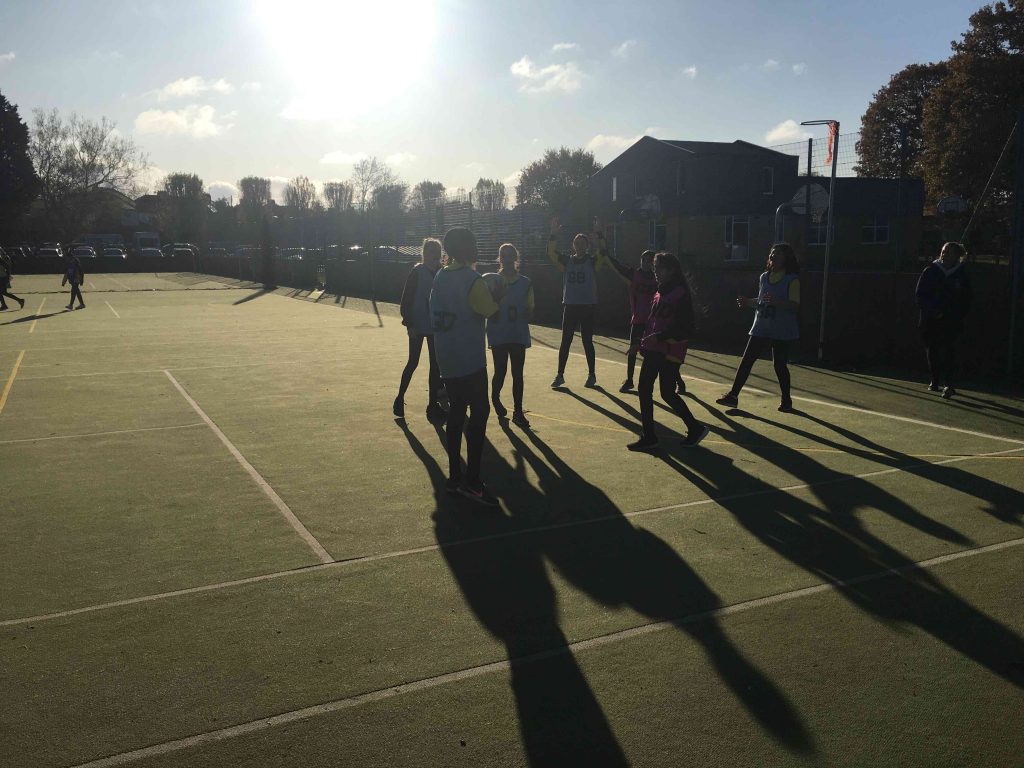 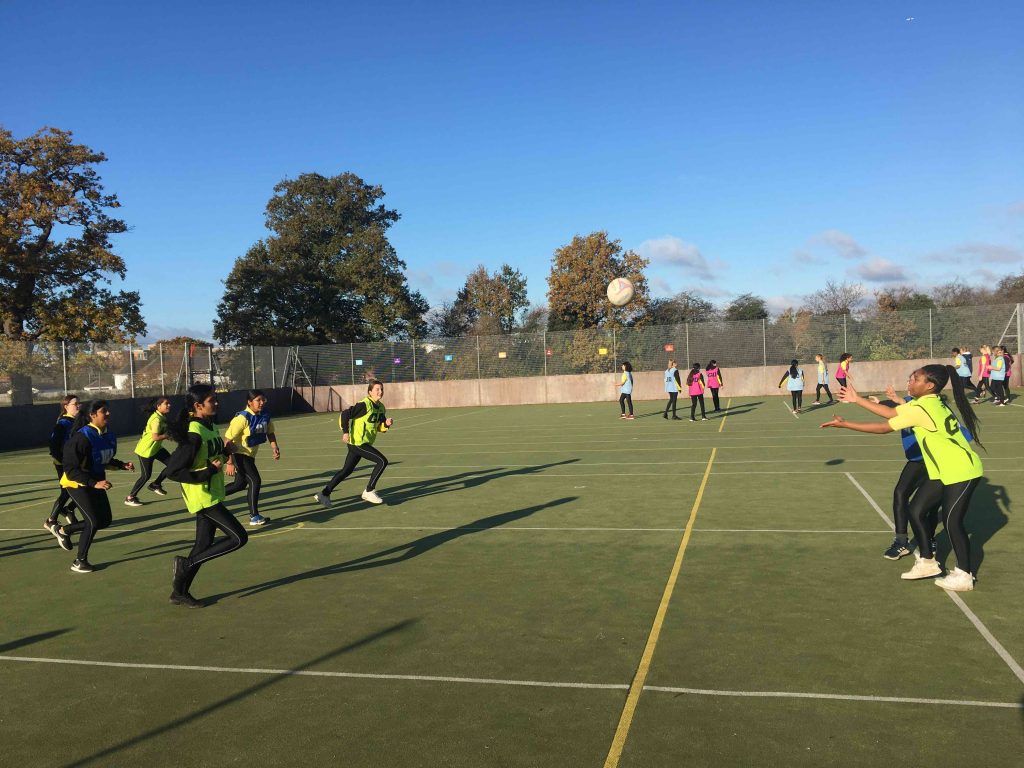 All houses play each other in each year group giving overall year group and overall house winners.

The competition as always was played in fantastic spirit with the girls all encouraging each other. The standard of netball was good and it was great to see all mixes of ability working together striving for the win. 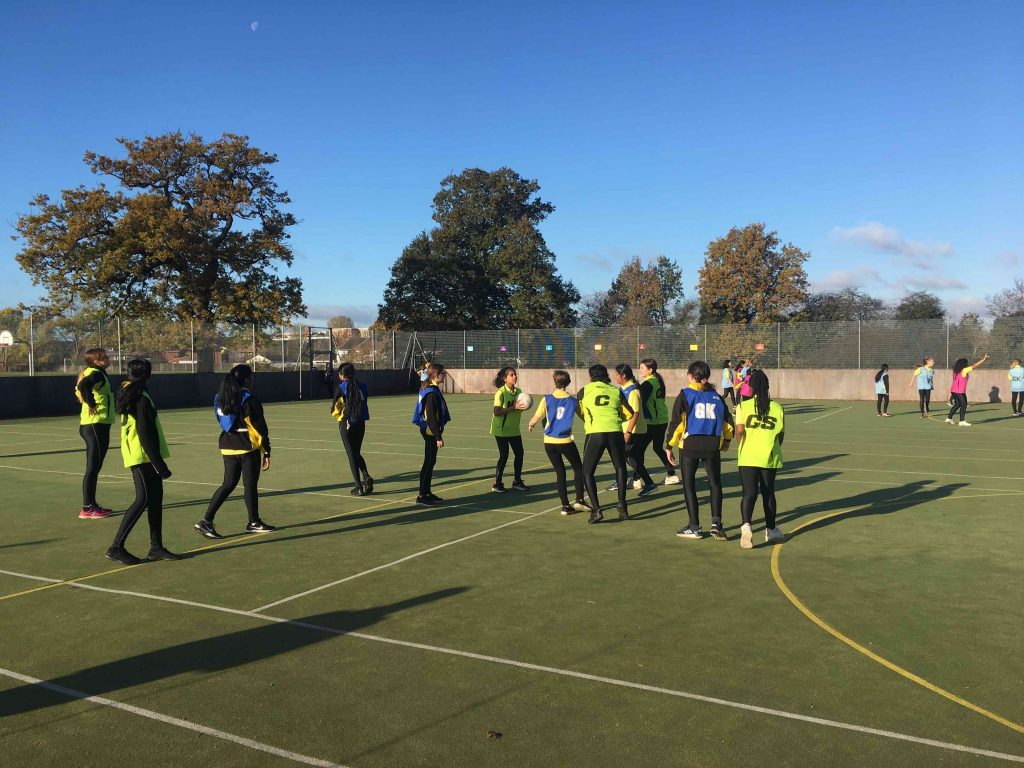 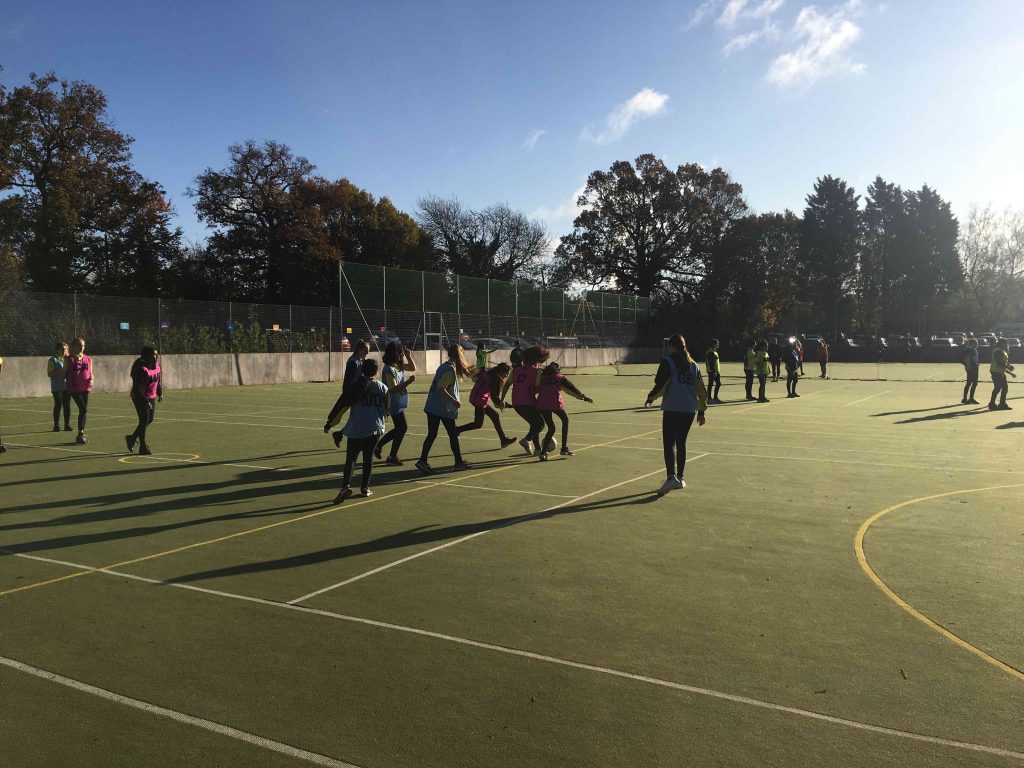 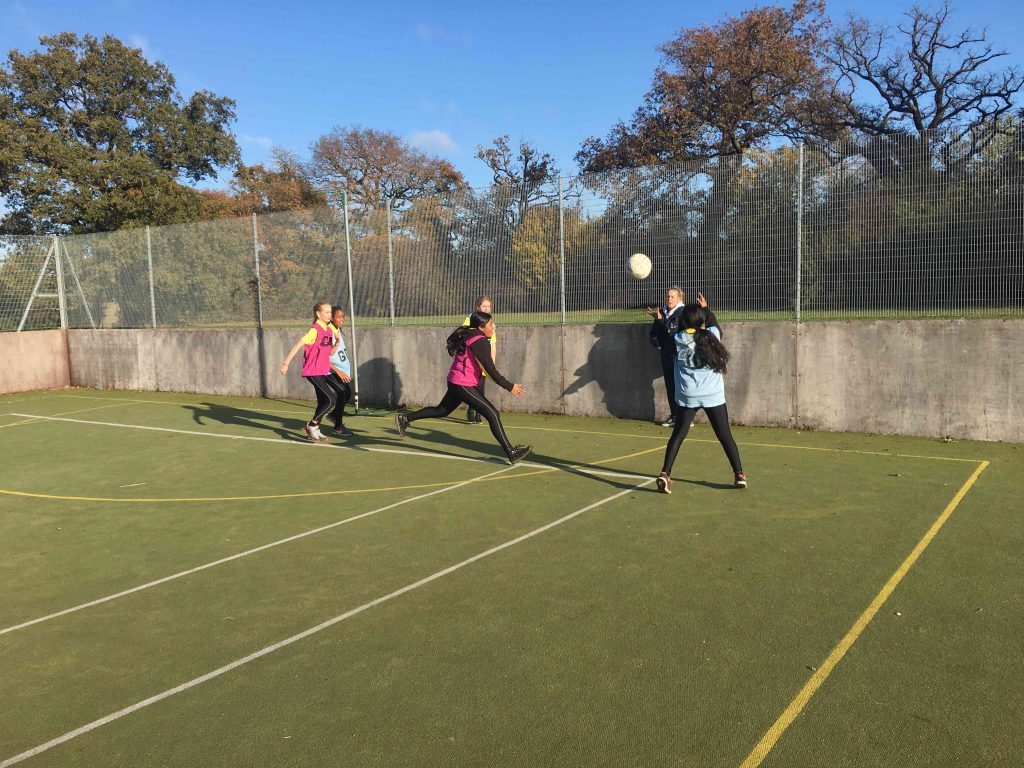 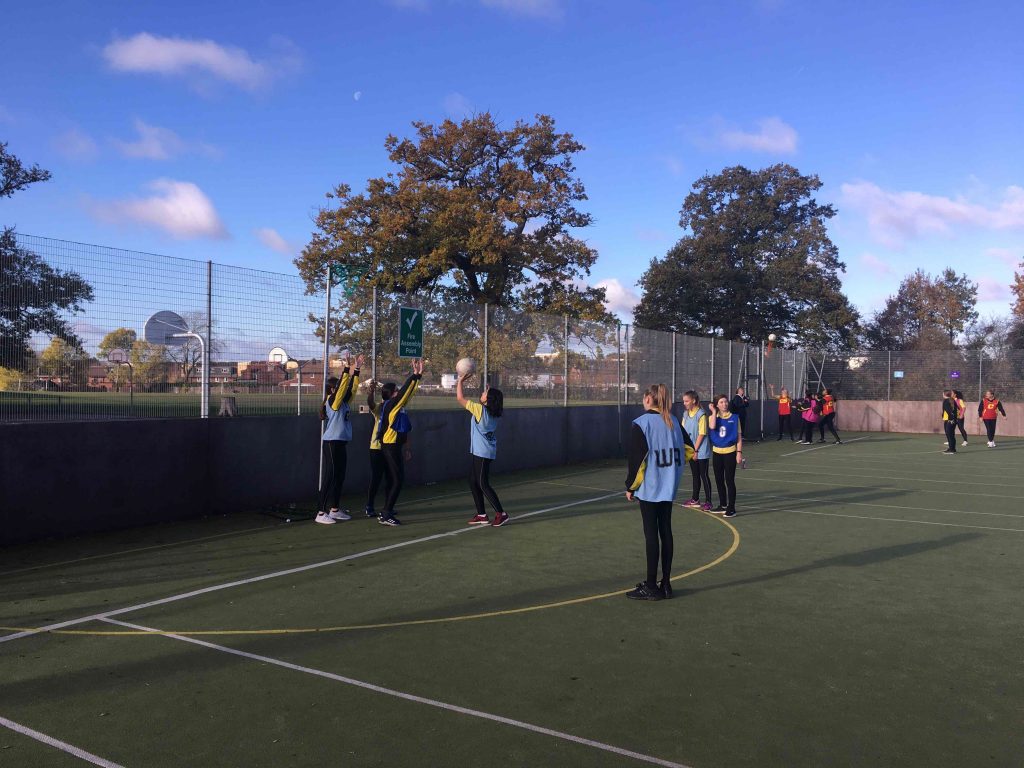 But for now some photos of the action!…. Great job ladies…. 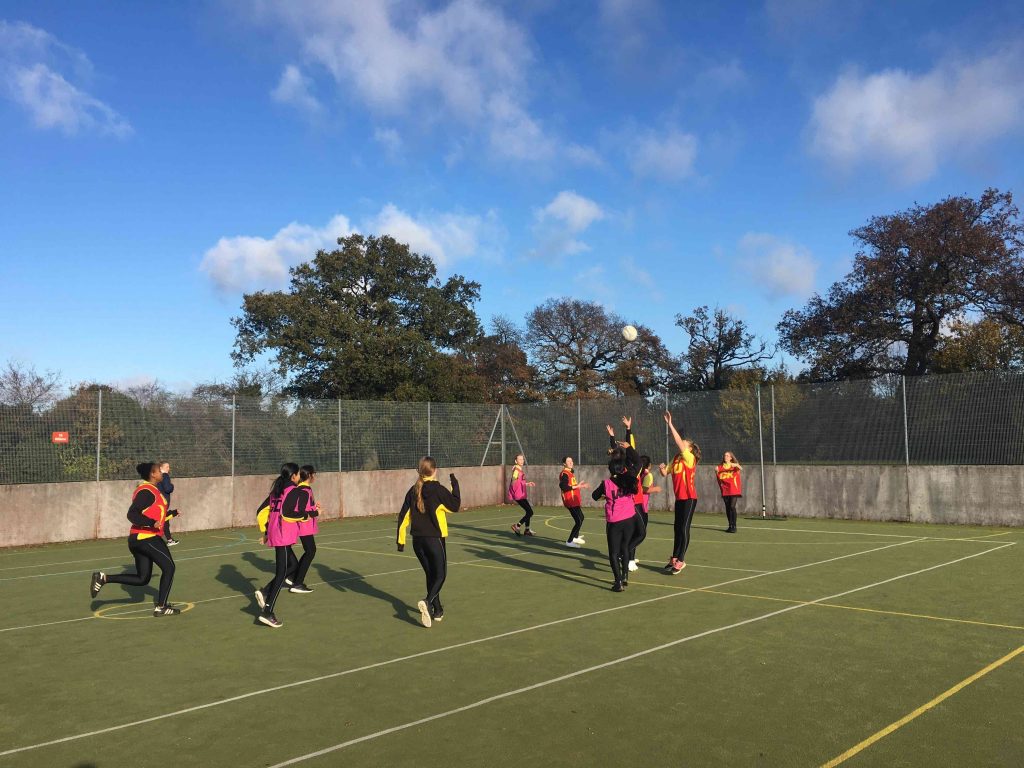 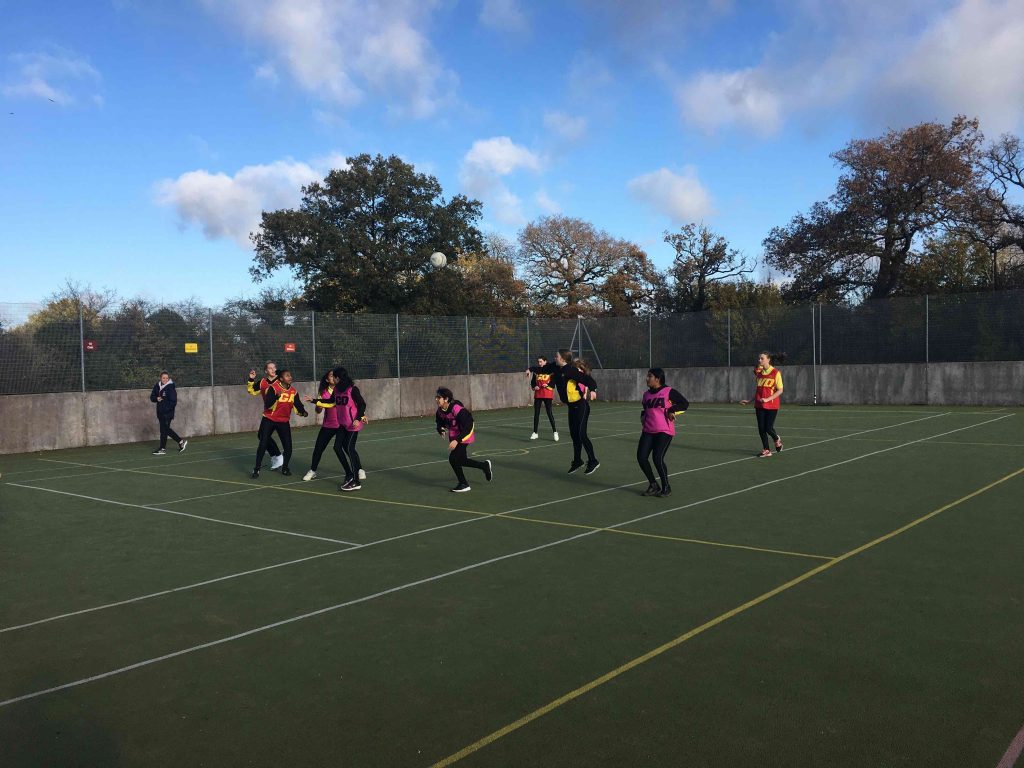 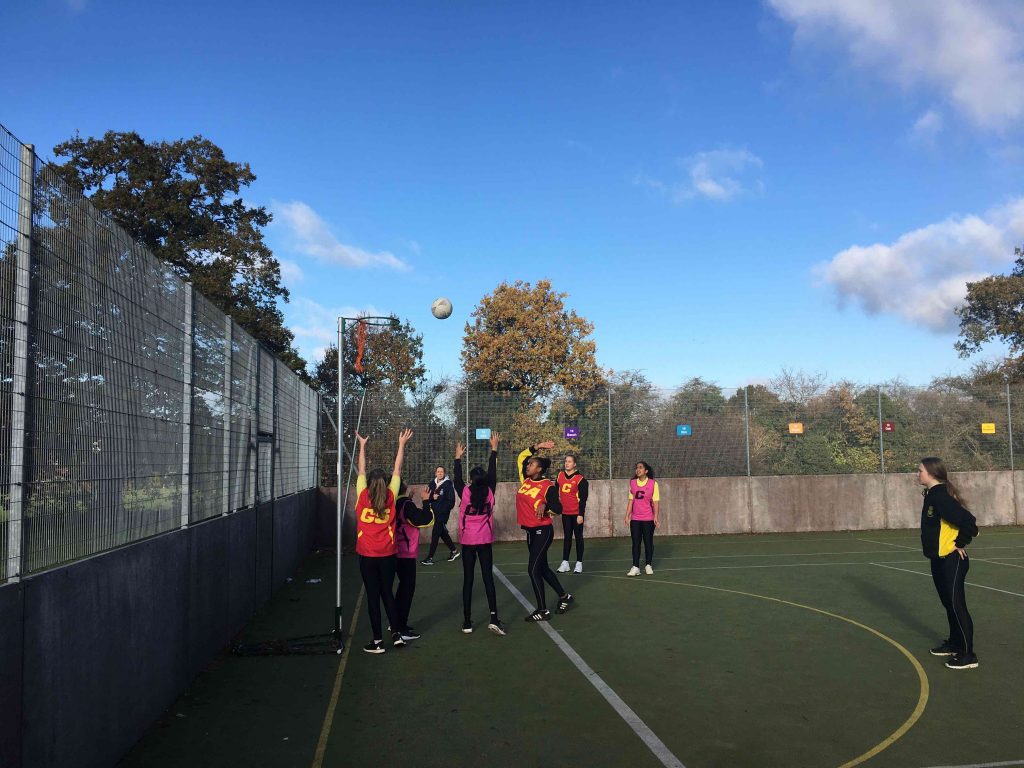 In a society where there are more and more distractions and activities that encourage us to be sedentary, we are very lucky to have such a great PE and Health Faculty at Bushey...