NEWS To round off a fantastic term of sport and physical activity the KS4 examinations groups enjoyed some enrichment trips in the final week of term. London Velopark Sports...

Thank you to all the parents and carers who park with care and consideration each day when dropping off or collecting their child from school. It is important that the two...

How about buying a book as a gift?

A book makes a fantastic present at Christmas time. The gift of a healthy reading routine is also invaluable. Here at Bushey Meads we continue to foster a love of reading across...

In our Design Technology Class we have taken the schools mantra “we have a mind to be kind”, and designed and created a money box for someone else or a charity collection box,...

Student Leadership Team in the Community

Last week myself and Mr Hooper had the pleasure of taking 15 year 11’s to ‘Maths in Action’ – a day of talks about maths and it’s applications in life. The students had a great...

Thirteen KS5 Maths students recently attended the Maths In Action event at the Emmanuel Centre. There were five guest speakers, talking about topics such as the Mathematics behind...

Over the last few weeks, the ‘So Last Era’ group have been making a display to go up in H Corridor. The display was about people who fought in the First World War from a minority...

On Wednesday Ms Budd asked us to go down to Little Reddings to set up the Christmas Grotto. We were all happy to do this because we like any chance to be creative! Setting up the...

To round off a fantastic term of sport and physical activity the KS4 examinations groups enjoyed some enrichment trips in the final week of term.

The Year 10 Sports Studies group are currently working on an Outdoor Activities unit and to build on their sailing trip earlier in the term the group went for a days outdoor cycling experience at the London Velopark on Tuesday 18th December. 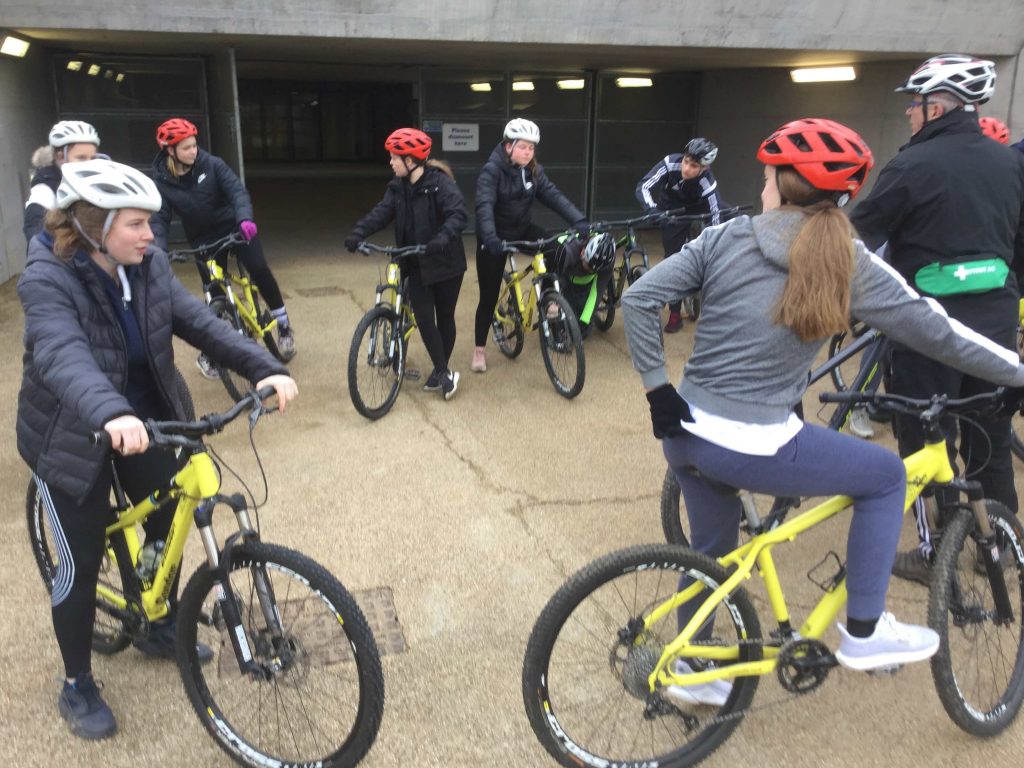 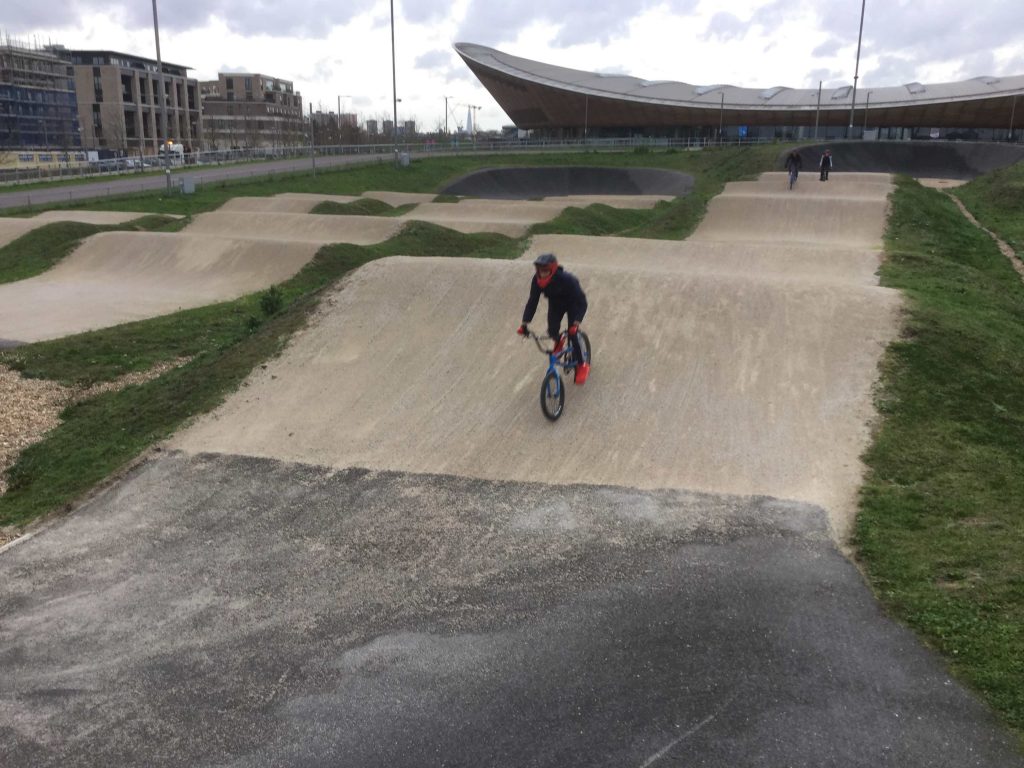 This included an hours training in BMX riding where the group got to ride on the actual Olympic track from London 2012. The group really developed their BMX riding skills as they progressed through the various challenges. This was followed by an hours mountain biking on the various trails around the cycling venue. 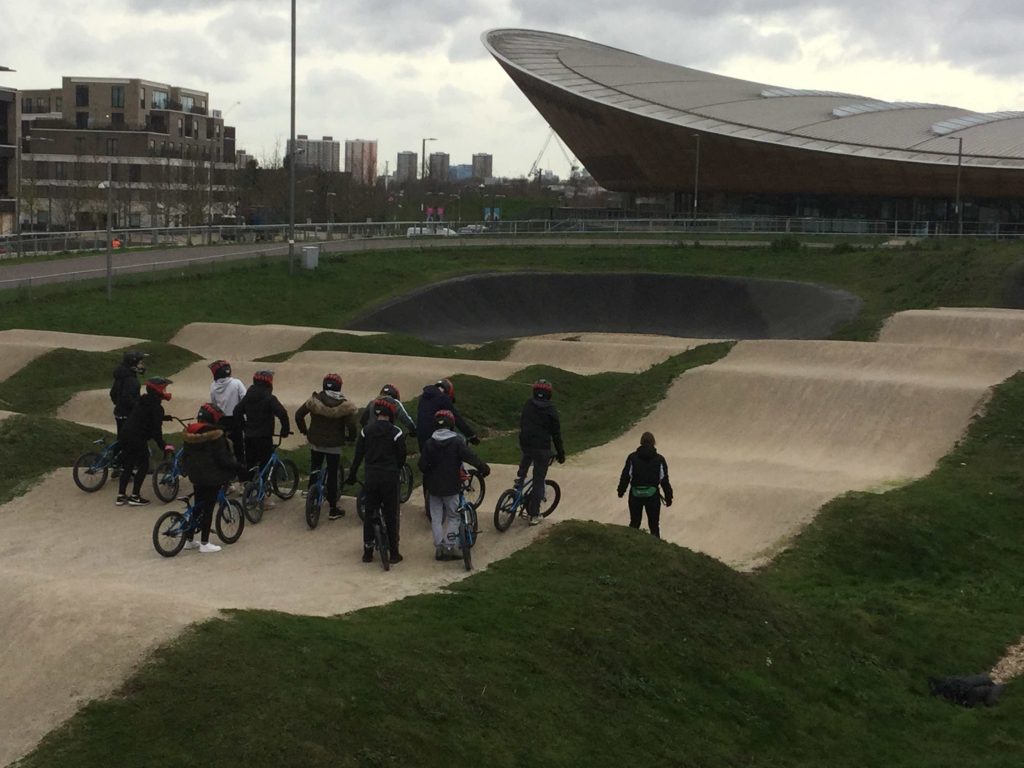 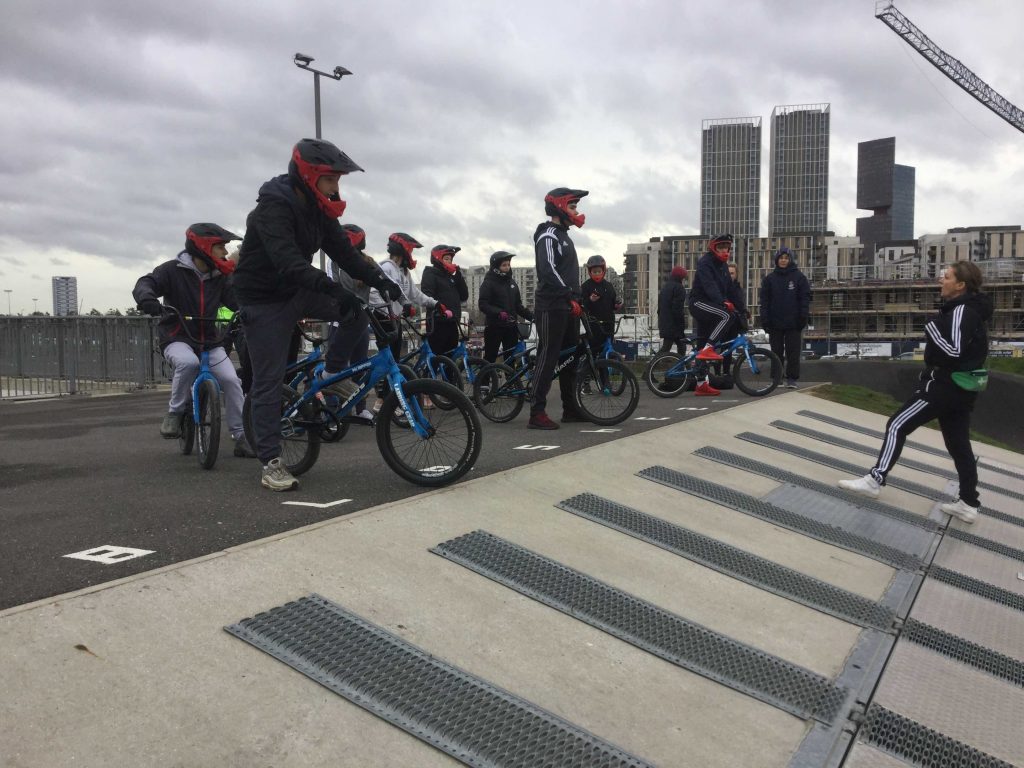 The group showed great determination and some really proficient cycling skills as they completed all the tasks set by the instructors. The attitude of the group throughout was excellent and there were some really tired legs on the journey home. The group can use these personal experiences to support their assignment work and it also prepares them for the outdoor challenges to come in Cornwall next year. Well done to all those who took park in the trip. 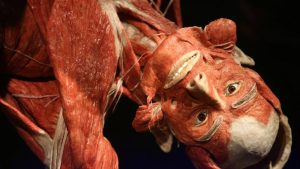 On Tuesday 18th December students in the year 10 and 11 GCSE PE classes were luckyenough to visit the Body World exhibition in London.  Heading off by coach into Piccadilly students and staff were intrigued by what this anatomical experience would have in store.

It was hoped the students would develop their understanding of the cardiovascular and respiratory systems as well as reinforce knowledge of the muscular and skeletal systems all integral parts of the GCSE specification.  The exhibition has only recently opened in London and we were lucky to be able to visit it in its infancy. 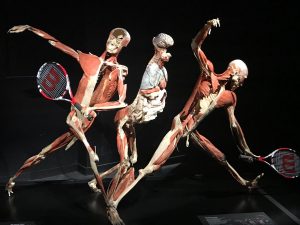 The exhibits were certainly intriguing.  With donor cadavers preserved through a process of plastination the bodies form a valuable insight into the workings of the human body.

Particularly impressive were the plastinations that allowed you to see the muscular, skeletal and internal body systems of the same cadaver all stripped back and performing the same movement, like the tennis example.

Hopefully the opportunity will have allowed the students to understand the processes discussed in class so that they can apply this practical application and understanding to their theory work.

Thanks to Mrs Andrews and Mrs Steele for supporting on the trip.

The annual Inter House boys football competitions took place over the last couple of weeks of term and as ever they were keenly contested with all the boys keen to score points for their house.

On Thursday 13th December the Year 10 competition saw Beech House record their 3rd IH Football win winning an impressive 4 games out of 4. Just under 40 boys took part from the year group. The winning Beech squad was : R Sims, B Castello, A Sykes, A Velautham, P Kulasinghe, M Keegan, A Doody 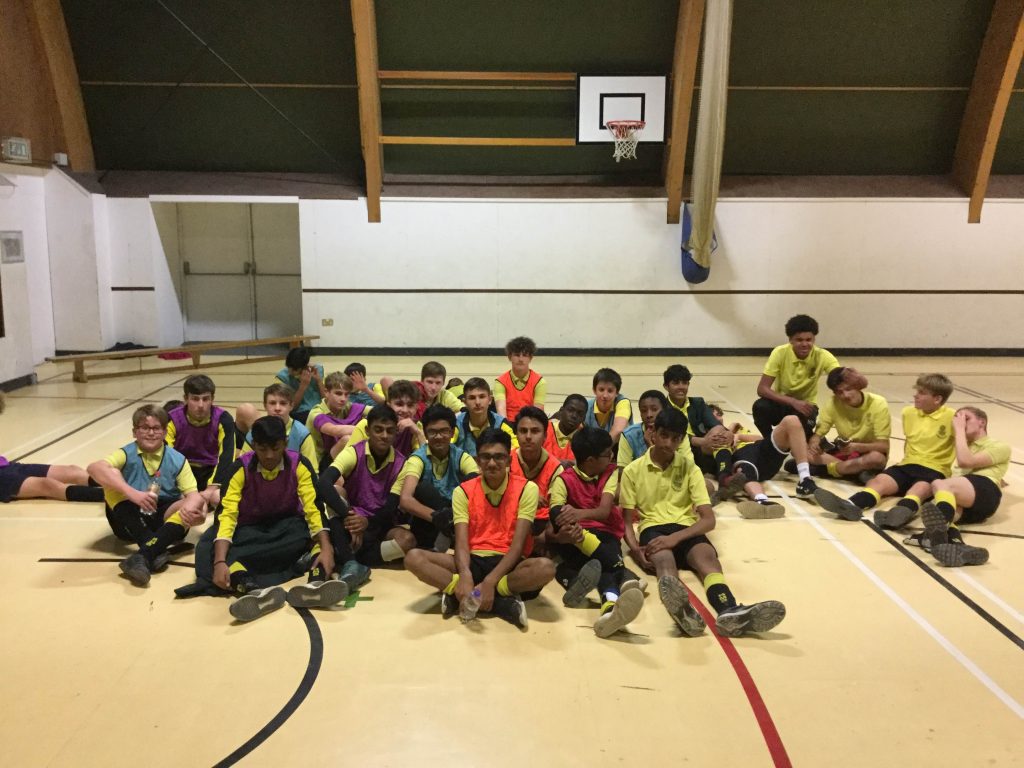 On Monday 17th December the year 7’s got their first taste of inter-house competition which saw Willow edge the win, gaining 10 points out of a posible 12. They were closely followed by Oak House who dropped a vital 2 points in their final game. The winning Willow squad was made up of: Z Alibhai, N Bryan, F Carpenter, H Cherawala, M Foote, S Galaiya, H Khan, N Lokuhewage, T Qarib. 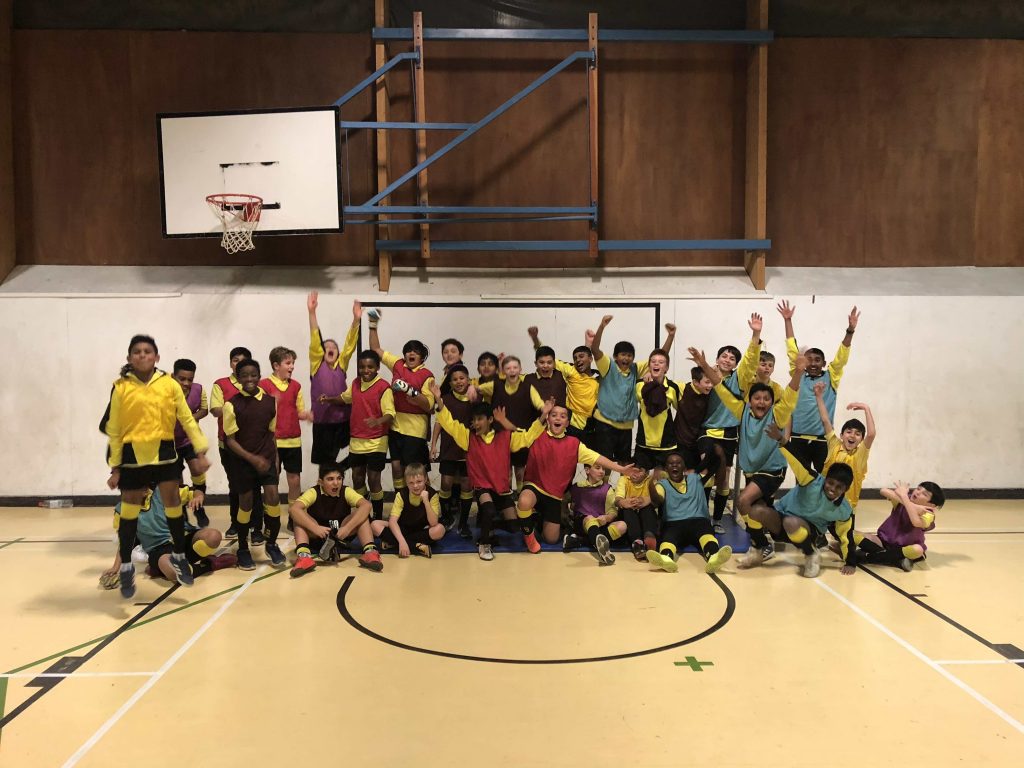 On Tuesday 18th December year 8 had their chance to battle it out for the inter-house football title. As expected it was a very competitive tournament with all 6 teams in with a chance of winning. The competition came down to the last match which saw Oak only needing a draw to win, whereas Maple had to win. In line with the rest of the tournament it was an even contest which ended in a draw sealing the win for Oak. The winning Oak squad was made up of: R.Ismaili, A.Ali,

The final tournament on Wednesday 20th December was perhaps the pick of the competitions with all 7 houses represented and nearly 60 boys from Year 9 taking part. The outcome of the tournament was not decided until the final game but a goal from S Sabapathy gave 9Ash a well deserved 1-0 victory over 9Elm to clinch the overall title. The winning squad from 9ASH was S Sabapathy, R Mohammud, O Knopf, S Booth, C O’Shea. 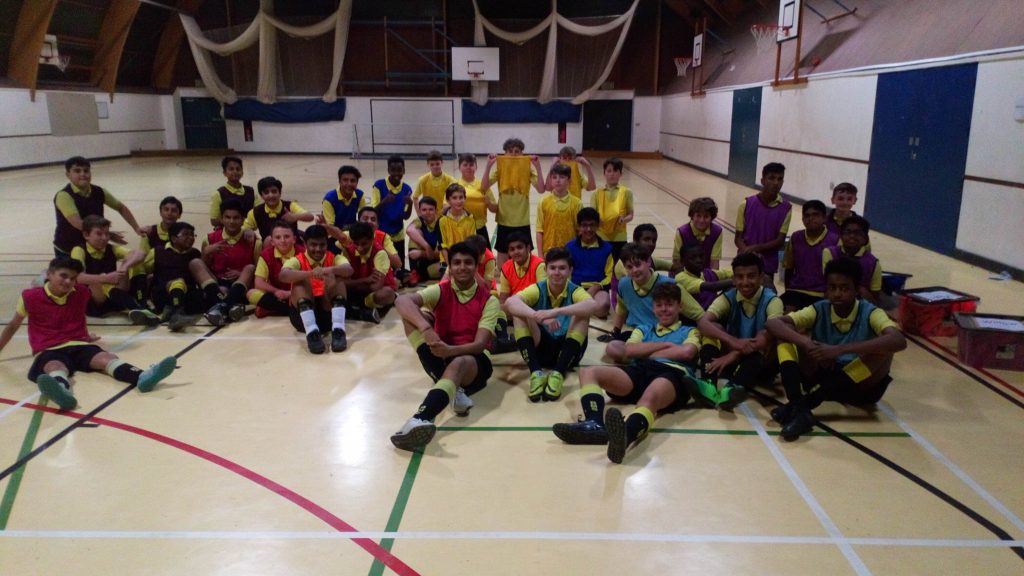 The Year 11 competition will take pace after xmas before the overall Inter House 5-a-side competition results are completed.

Comment : The year 8 A team took the short trip to Berkhamsted to take on a well organised and strong Ashlyns side. The team started the game well by creating some excellent early chances to open the scoring. However the home side took the lead through a well worked move and a clinical finish. Their lead was then doubled shorty before halftime. Knowing that they had it all to do in the second half the team started the half very well. They were dominating in possession all over the pitch and creating some excellent chances. Their posistance soon paid off as fantastic solo run by R.Ismaili and an equally good finish saw the team pull a goal back. They were soon level as B.Narroway broke free and slotted the ball past the keeper. The game seemed to then take a turn for the worst as the homeside were awarded a penalty with only a few minutes remaining. C.Martin pulled off an excellent save to ensure the game was still in the ballance. With only a couple on minutes remaining the team broke a way down the left and crossed the ball into the box and after several blocked shots B.Narroway squeezed the ball underneath the keeper to take the lean. The team managed to hold onto their lead and came out winners at the end of the match. Plenty of positives to take into the next round of the cup.

Comment : We took a trip up to Stevenage to take on Marriotts School, who were a well organised and competitive team. The boys delivered a professional performance which did require them to dig-in at certain stages, before delivering a strong win. It was great to see the squad of players in high spirits, whilst representing the school in a positive way as always.

NEWS County Representation Last week we received the fantastic news that Max M in Year 9 had been selected for the Hertfordshire County U14 football squad. Over the last few weeks...