Over the last 18 months, I have immensely enjoyed leading our school debating society. When I took over back in 2017, I could never have imagined the scale of the success that the...

It was great to see Elaine, Kara and Pilar lead a stretch and challenge True/False starter activity that engaged all students in revisiting prior learning covered during their...

On Wednesday, 13th March, a gaggle of excited students gathered outside our Sixth Form Centre, eagerly anticipating the start of our House Big Countdown Quiz. The electric...

The anti-bullying ambassadors had the opportunity to meet up with the Princes’ trust students on Monday to talk about how they raised £67.00 during their Erase Bullying Campaign....

Student of the Week – Issue 39

Kindness Thought of the Week – Issue 39

Over the last 18 months, I have immensely enjoyed leading our school debating society. When I took over back in 2017, I could never have imagined the scale of the success that the debating project has had. Participation levels have reached all time highs, with several dozens of students from all year groups now attending our weekly meetings. The activity of the debating society has also greatly increased with weekly debates, debating related activities and involvement in various events, including debating competitions in Parliament and at Watford Boys last year.

However, with my time at Bushey Meads nearly up and exams just around the corner, I have decided now is the time for me to step aside and make way for a new leader who can guide the debating society to even greater success, hopefully well into the new decade.

Over these last three weeks, the debating society has been focused on choosing my successor through a series of heated leadership debates. On 11th March, five candidates – Megan, Aaron, Noah, Jhanavi and Simran – put themselves forward for the leadership in our first debate. The five candidates gave speeches and answered questions on their qualifications to take over, and what changes they would implement if they were to win. Members of the debating society then voted for their preferred candidate. Megan won the first round with 44% of the vote, with Jhanavi and Noah also making it through to the second round of the competition.

On 18th March, Megan, Jhanavi and Noah returned to H4 to take each other on in the second debate. The debate took a more personal and fiery turn then the first, with the three candidates scrutinising and questioning eachother’s leadership credentials and commitment to the debating society. In a dramatic turn of events, Jhanavi decisively won the second round with 53% of votes cast. 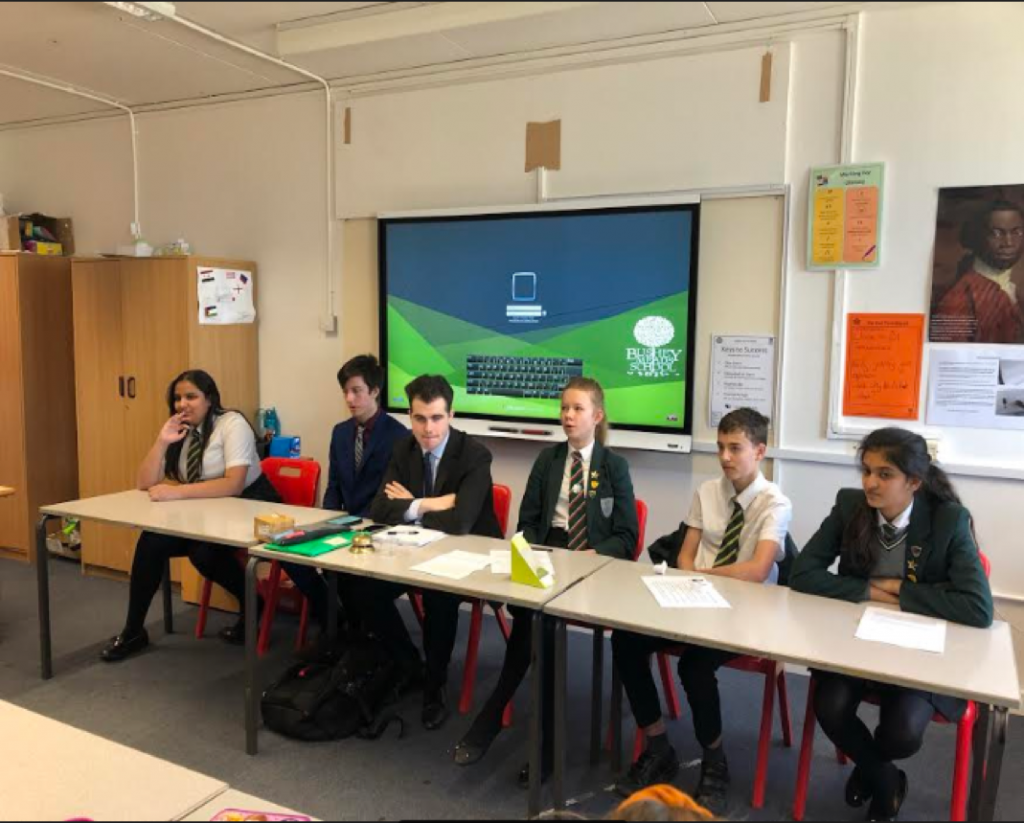 With Noah finishing in third place, Jhanavi and Megan came face to face one last time in the third and final debate. I will be announcing the final result at lunchtime in H4 on Monday 1st April, at which point either Megan or Jhanavi will take over from me. All are welcome to come to this special meeting and I hope to see many of you there.

I welcomed back a new group of keen chefs from Year 7 and 8 this week as cooking club in the Technology block resumed. We divided up and each made an element of a chicken nachos...