Back to Latest Articles
Student Leadership

At Bushey Meads School we hold many events and meetings where we rely on students to help us ensure they run smoothly, and I am lucky enough to have a group of students called the...

Last week the house volunteers made their first visit to Bushey House, a care home for the elderly on Bushey High Street. Each student had to apply for their place to be part of...

In the fast pace of everyday life, we are attempting to address our wellbeing in the workplace. Recently we encouraged staff to pop into the staff room at lunchtime in order to...

Last week it was really good to meet Mrs Aharon the Acting Executive Principal of St John’s Infant and Fairfield Junior School in Radlett (one of our many feeder primary schools)...

Great Teaching and Learning at BMS

Recently, I had the privilege of trying to capture some of the wonderful teaching and learning taking place across the whole school. Year 10 G4G: My first stop was to see how the...

Please find the timetable for revision session running during February half term. Please note you must attend the sessions as advertised in the rooms listed – you must not...

Theme of the Week: Resilience

It was great to sit in the Year 9 Assembly last week – one of several main school assemblies led by Mrs Hayward, our hard working Head of Economics and Business Studies, on...

During period five on Monday 15th January, the school held the first student parliament meeting of 2018. This meeting was organised and led by the senior prefects: Riya, Emma S, Devan, Leon, Ben and Tristian.

The meeting began with Leon, who set out the agenda for the meeting and explained the role of the senior prefects – a group of sixth formers who work alongside the Student Leadership Team, attending meetings with our head girls, head boy and deputies (Amira, Isabella, Rikesh, Victoria and Nathaniel respectively) to analyse and implement feedback from the Student Parliament. 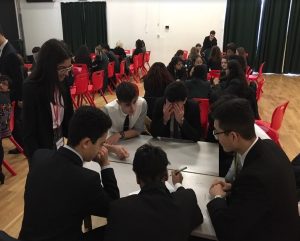 Following Leon; Emma and Riya informed the Student Parliament of some specific issues and suggestions that the Student Leadership team are looking into based on feedback Form Representatives (FRs) had given during the previous meeting. This included promoting the healthy menu in the restaurant, and reform to the school’s reward and consequence system to ensure greater clarity and consistency in the allocation of reward and consequence points. Some improvements are still ongoing, e.g more lights in the quad (this is a potential investment for open evenings). We also talked about recycling and decided to add this to our excellent eco-monitors role.

This meeting we decided to invite the Anti-Bullying Ambassadors. These are headed up by Miss Mateides who does a superb job. A few of the ambassadors gave a short presentation about the pledges and the Anti-Bullying poster competition which was wonderful to see. 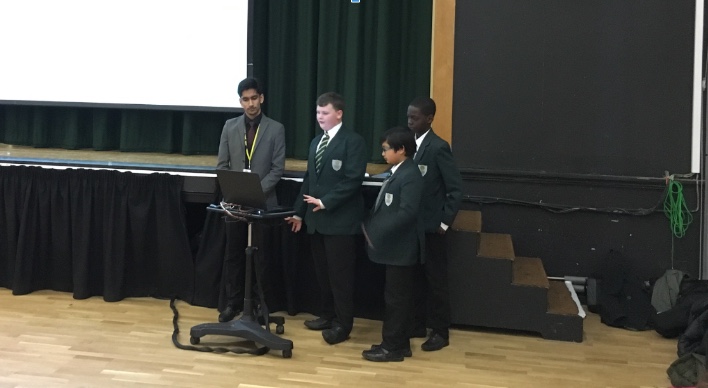 Anti-bullying ambassadors presenting to the meeting

This meeting was all about form representatives and their roles. They answered questions which invited them to set out their ideas about how the role of form representatives (FRs) could be expanded to ensure they are better integrated, not just in the decision making process, but also in the life of the school more generally. These questions included: “What changes would you like to be made to your role?”, “What more could you be doing as part of your role?” and “How do you think the profile of your position could be raised?”. 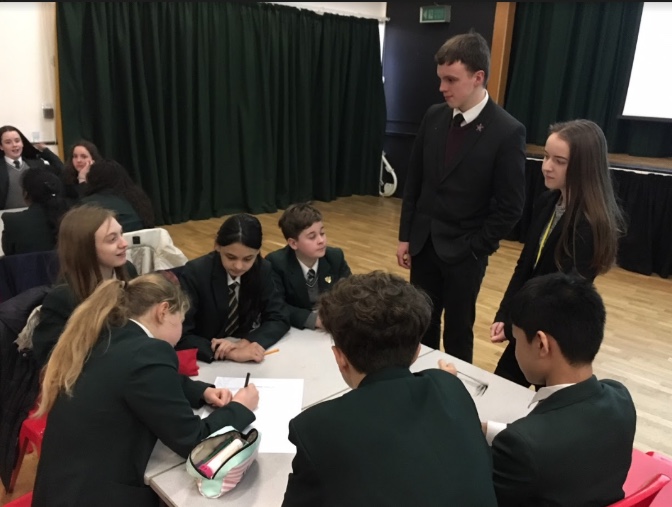 FRs were buzzing with ideas and opinions. Year 7 FRs Anton, Laksan, Benji and Rayan suggested that FRs should be given more responsibility – including leading form time activities and even assemblies. Year 8s highlighted the need for more awareness as to who the FRs actually are, whilst year 11s spoke about how the role could be adapted for their year group to ensure that they can continue to carry out their responsibilities during the pressure and of the GCSE preparations. 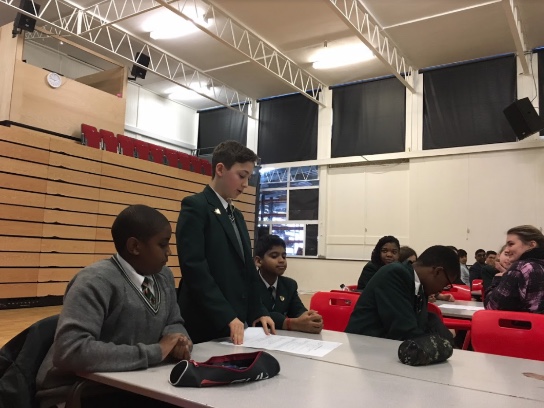 The meeting was concluded by Devan, who asked one FR from each table to pick out their best idea and share it with the meeting.

Overall the meeting was a very productive and positive one. With a lively and busy atmosphere, the discussions were constructive and engaging.

Thank you to the senior prefect team for facilitating this meeting. Leon, Emma S, Riya Patel, Devan, Tristian and Ben.

Student Leaders 2019-20 ASPIRE NOT TO HAVE MORE, BUT TO BE MORE Bushey Meads School has an exemplary model for student leadership – much to the credit of the great work of...

Last week it was really good to meet Mrs Aharon the Acting Executive Principal of St John’s Infant and Fairfield Junior School in Radlett (one of our many feeder primary schools)...